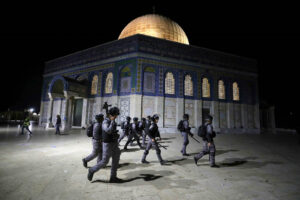 Toufic Haddad writes: Below is unedited text of a short post I composed late last night regarding events in Jerusalem and in general. The post was doing very well with apparently several hundred shares, but within a few hours it was taken down by Facebook, and I was informed it was “Hate Speech”. I contest(ed) that accusation, but what is even more disturbing than this act of censorship, is that while I was informed by Facebook that it was ‘hate speech’, they told my audience who had reposted it that I changed the settings on it or it was deleted – with no mention of hate speech, and implying it was me who deleted it.

HELP BOOMERANG THE ATTEMPT AT CENSORSHIP BY SHARING AND REPOSTING ON YOUR SOCIAL MEDIA. AND THANK YOU FOR ALL YOUR SUPPORT.

For anyone following developments in Jerusalem the past month, it was evident that today (Monday) was going to be determinative: the Israeli High Court was to meet in a special session to rule on evicting Sheikh Jarrah families, and thousands of Zionist thugs were to march on the Al-Aqsa compound in a racist display of ‘unified Jerusalem,” all under hundreds of armed guards.

What a difference an intifada makes!

The Israeli Attorney General was forced to intervene over the weekend to delay the Court’s ruling on the evictions for a month (fearing international outcry).

The march of racists was stopped in its tracks – initially because Israel’s intelligence agencies and army said it would ignite a powder keg – not just local but possibly regional and international.

Regarding the latter, we witnessed an astonishing series of retreats today – first pulling back from allowing the march to enter the Al-Aqsa compound this morning after hundreds of Palestinians defended the compound starting at 8 am. Then by 2:30 pm, the occupiers retreated on the route once again, preventing access through Damascus gate. By 6 pm, once the rally had begun – with notably far fewer numbers than expected – it was forced to abruptly end under the sound of sirens from Gaza’s rockets, and without even entering the Old City.

Israel is in a corner, traditionally preferring to pocket its achievements below the radar.

But resistance and solidarity work and today is a testament to that.

Of course the battle is long and by no means over.

They will try with the evictions again in a month. They will go back to their plotting on how to take over Al-Aqsa and other parts of the Old City. Twenty people have been massacred in Gaza, many of whom are children, and the shelling still continues as I write this.

But it’s also important to recognize the huge achievements we are witnessing.

Israel displays no control over East Jerusalem except through sheer force, and that too is also not enough. Its soldiers on the streets – despite their arms, armor, horses, cameras, drones, blimps and stink water – appear confused and clumsy, as street smart middle schoolers goad them, and Ramadan fasters fearlessly break bread in front of armed settlers.

Israel’s allies (the overt and the covert) beg Israel not to escalate – some, so as not to blow their complicity in its crimes; others because they never supported Israel for some freak Messianic concept to begin with.

And an Intifada has broken out across the entirety of historic Palestine now.

The latter promises to draw attention not only to ‘the problem of Jerusalem’, but also to the complete failure/sham of the ‘peace process’ and the glaring apartheid that has indisputably emerged here as a result of it.

If things persist in this fashion, there is a possibility that the contagion of ‘people power’ can spread across the Arab regional theater (and beyond?), reigniting the revolutionary fires that the counter revolutionary forces (both East and West) thought they had extinguished these past few years.

Before one gets ahead of oneself, let us absorb these moments and their lessons and prepare accordingly.

I close with two images of the magnificent solidarity demonstrations witnessed this evening in Jenin and Nazareth – two sides of the Green Line, one struggle – for a free Palestine and free Jerusalem. Bless.

Posted May 11, 2021 Israel/Palestine, Uncategorized by Phil Gasper
About Author
Toufic Haddad is an associate member of the Centre for Palestine Studies, SOAS, University of London and the author of Palestine Ltd.