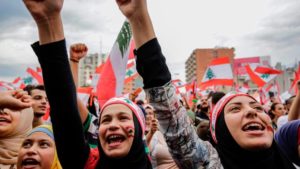 Most news sources are construing or minimizing the Lebanon uprising by claiming it’s only due to a monthly Whatsapp fee, but it is much much more than that. Systemic issues are being raised, sectarian divides are falling, and the wall of fear created by sectarian gangster leaders is being confronted, and hopefully dismantled.

Popular revolts in Sidon, Tyre, and Nabatieh in the South, controlled by Hezbollah and the Amal Movement, were attacked by party thugs but protesters (who generally show loyalty to the parties) continued to show up in large numbers the following day. In Tripoli in the North, which Lebanese media has in the last few decades portrayed as an almost terroristic island on its own, almost 100.000 people showed up in the square and demanded the overhaul of the government. In the capital, Beirut, close to 1.5 million protested, almost half the country when you exclude 2 million Syrian and Palestinian refugees, some of who also participated in protests on the streets and in camps, alongside migrant workers and LGBTQ community!

The government has since retracted the new tax laws, and offered a new budget plan (which is not horrible but far too late, and there is very little trust in the government by the people). It seems people are hellbent on overthrowing government, and have took on Tunisia as a good example of peaceful transition of power in the Arab World. I would argue that the Armenian revolution of last year also had a big influence.

One thing is for sure, that the socio-economic conditions have simply become unbearable. This is a country where there are 2 bills for electricity because it is cut three times a day, there is still no clue about what to do with garbage, unemployment is at an extreme high, drinking water is polluted, mountains and forests are being razed to the ground, extreme nepotism rules, and people are either simply surviving by doing whatever is necessary or hoping their visa applications are accepted, or both.

Last week, 105 wild fires ravaged the country because of either drought or being set intentionally by agribusiness and there was absolute incompetence by the state in containing it. Civilians actually were largely responsible for stopping them in time.

I cannot exaggerate how exciting this is because I am from Lebanon. The streets of Lebanon have come out as secular. Who would have thought?

It is a very interesting development in the only sectarian/confessional state in the region, and perhaps the world. There might be dramatic change, or back to usual but with a little weight off the people’s shoulders. This week should show if Lebanese are truly serious about an unlimited general strike, and my hopes are that some new faces emerge that might be able to represent the spirit of the Intifada. Some truly courageous acts have happened on the streets (Here are some: https://www.facebook.com/nour.hajjar/videos/10157345814691508/ ; https://www.facebook.com/ziad.srouji.5/videos/2817311624946813/ ; https://www.facebook.com/alilatifafakhry/videos/10157502750702980/), and have truly inspired millions of Lebanese around the world.

Posted November 7, 2019 Civil Liberties/Repression, Human rights, Lebanon, Social protests by Jason Schulman
About Author
Kevork Sassouni is an Armenian student activist who lived in Lebanon for most of his life and has participated in several grassroots social movements.