SUBCOMANDANTE MARCOS STEPS DOWN – WHAT'S NEXT FOR THE EZLN?

Subcomandante Marcos, the famous voice of the Zapatista Army of National Liberation (EZLN),announced in the early hours of Sunday, May 26 that he ending his role as the group's spokesperson and military commander. Or as he put it, Subcomandante Marcos, a “harlequin” and a “hologram” created by the EZLN, has now ceased to exist. 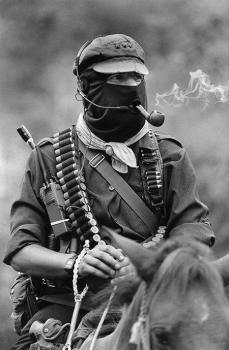 Making his first public statement in five years, Marcos denied claims that he was either in ill health, had died, or had been displaced or purged by the EZLN. From now on, he said, he would be known as “insurgent subcomandante Galeano,” taking his new name from José Luis Solis López, better known as “Galeano,” a Zapatista militant assassinated by a paramilitary group on May 2 in the autonomous Zapatista town of La Realidad.

In stepping down, Marcos pointed to demographic changes in the thirty-year old organization as new younger, indigenous leaders stepped forward replacing an older largely mestizo leadership, several of whom came out of the student and guerrilla struggles of the 1970s and 1980s. With Marcos apparently giving up leadership of the group, what will happen to the Zapatistas? What new political vision and strategy will the EZLN put forward in his absence? And what will be the role of the new subcomandante Galeano?

Marcos, whose real name is Rafael Sebastián Guillén Vicente, was born on June 19, 1957 in Tampico, Tamaulipas. His father and mother were both school teachers; his family was middle class and comfortably well off. He graduated from a Jesuit High School in Tampico, studied philosophy at the National Autonomous University of Mexico (UNAM) in Mexico City, and later pursued graduate studies at the elite Autonomous Metropolitan University (UAM). At UAM he studied and taught in the Sciences and Art for Design Department, offering his students a reading list that included Karl Marx, Louis Althusser, and Mao Tse-tung. While there are stories that Guillén has studied at the Sorbonne, been involved in the Sandinistas revolution in Nicaragua or been a labor organizer among Mexico City bus drivers, none of these has been confirmed and all seem implausible.

Sometime in the early 1980s, Guillén joined a guerrilla organization that later became the EZLN. The National Liberation Front(FLN) had been established in 1969 under the leadership of the brothers Cesar Germán and Fernando Muñoz Yáñez as a Marxist-Leninist organization. Like other such groups of the era its inspiration came from Mao, Fidel Castro, and Ernesto “Che” Guevara. Its goal was the creation of a small revolutionary organization that might lead a revolution such as those that had been carried out in Cuba and in Nicaragua.

The group, which originally operated in Monterrey, Nuevo Leon in northern Mexico, suffered a police attack in 1974 that virtually destroyed the organization. It was then that Fernando Muñoz Yanez took the survivors to Chiapas, Mexico's southernmost state. The FLN was active in Chiapas from 1974 to 1983 and it was during that period that Guillén joined the organization, which in November 1983, merging with indigenous militants, transformed itself into the EZLN. One of the persistent and unanswered questions remains: what was the relationship between the Marxist-Leninist cadres and their indigenous allies?

Chiapas, with a large indigenous Mayan population, is one of Mexico's poorest states despite rich natural resources. The Catholic Bishop Samuel Ruiz García, whose views were informed by liberation theology, sent catechists to teach both the Gospel and to call for social change among the indigenous communities and the mestizo immigrants from other regions of Mexico. It was in this poor, somewhat politicized indigenous population that the EZLN built its organization with tacit support from many of the Catholic catechists.

In 1993, Guillén/Marcos carried out a political coup within the EZLN. Marcos fought and won a power struggle within the group and, inspired by his hero Che Guevara, created a more centralized and disciplined organization, and planned to launch an armed rebellion.1On January 1, 1994, Subcomandante Marcos led the Chiapas Rebellion in which hundreds of indigenous and mestizo troops seized several small towns and briefly occupied the city of San Cristóbal de las Casas. Those events, communicated through the internet to the rest of Mexico and the world, brought Subcomandante to international recognition as the masked face and the sophisticated voice of the Zapatistas.

I recently wrote an overview of the twenty years of Zapatista history since the Chiapas Rebellion, so I will not repeat that analysis here. Throughout the last twenty years, as the Zapatistas established their autonomous communities, engaged in attempts to build a national indigenous movement, and carried out political propaganda against capitalism through their "Other Campaign,” it was Subcomandante Marcos who acted as the group's spokesperson. Since the Zapatistas' political decision-making processes are not transparent, one presumes that Marcos played a central role in shaping the EZLN's autarkic and sectarian strategy that rejected not only Mexico's corrupt political system and parties, but also coalitions and alliances with others on the Mexican left. Zapatistas observe the 20th anniversary of the 1994 rebellion in January 2014.

What Next for the EZLN?

With or without Marcos, the EZLN will continue to face threats from landlords, government enterprises, political parties, and the state itself. The government could see this moment of transition as an opportunity to eliminate the Zapatistas as a factor in the affairs of Chiapas and Mexico. Historically, since the Revolution of 1910 to 1920, the Mexican government has dealt with such movements through a combination of violence and co-optation, killing off the leaders and offering reforms and relative economic security to the followers. Certainly, the government of President Enrique Peña Nieto is capable of just such a strategy. The Zapatistas must be on guard and we must be prepared to offer our solidarity. [The National Committee of Solidarity recently endorsed this statement and has encouraged members of our organization to participate in solidarity events in the US.]

The best defense for the Zapatistas would be a political offensive, projecting the movement as they did in the mid-1990s to Mexico's indigenous population, civil society, and, above all, to its working class, offering a program of democratic socialism such as they have failed to put forward clearly in the past. The question is, will a new Zapatista leadership be able to develop a new left politics based on a non-sectarian relationship to the left and the social movements in Mexico? And will the EZLN be able to work with others on the left to develop a genuine, independent, and radical political party? Mexico and the world wait to know if the Zapatistas can once again inspire hope of a revolutionary transformation.

Dan La Botz is an editor of New Politics and a member of Solidarity in New York City. He is the author of several books on Mexico.

This article was first published on the Solidarity website.