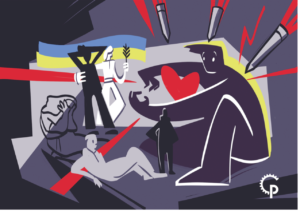 Picture about the importance of mutual assistance and cooperation during the Ukraine war. Katya Gritseva, 2022, digital art, Kharkiv

The brutal Russian invasion of Ukraine has been a litmus test for the Left. A principled and strategic commitment to the Ukrainian people, in their defense against Russian imperialism offers the answer.

Arising out of the Socialism 2022 Conference—held in Chicago over Labor Day weekend—and inspired by a session led by Ukrainian political economist and activist Yuliya Yurchenko, a group of mainly U.S. leftists came together to form what has become the Ukraine Solidarity Network – U.S. (“USN-US”). Over the last few months, and with active support from both Ukrainian leftists (such as Social Movement / Sotsialnyi Rukh), and the growing international solidarity movement, the USN-US is seeking to grow and gain support.

New Politics is built on a commitment to the politics of socialism from below and the vision of a “third camp,” which looks to the force of the working class and the oppressed, and not to rival capitalist states, as the key to our collective liberation. The work of the USN-US, in seeking to support “Ukraine’s war of resistance, its right to determine the means and objectives of its own struggle,” while “stand[ing] in opposition to all domination by powerful nations and states, including by the United States and its allies, over smaller ones and oppressed peoples” is consonant with our vision. We republish that statement here and encourage readers to add their names to the list of signatories.

The Ukraine Solidarity Network (U.S.) reaches out to unions, communities and individuals from diverse backgrounds to build moral, political and material support for the people of Ukraine in their resistance to Russia’s criminal invasion and their struggle for an independent, egalitarian and democratic country.

The war against Ukraine is a horrible and destructive disaster in the human suffering and economic devastation it has already caused, not only for Ukraine and its people but also in its impact on global hunger and energy supplies, on the world environmental crisis, and on the lives of ordinary Russian people who are sacrificed for Putin’s war. The war also carries the risk of escalation to a direct confrontation among military great powers, with unthinkable possible consequences.

It is urgent to end this war as soon as possible. This can only be achieved through the success of Ukraine’s resistance to Russia’s invasion. Ukraine is fighting a legitimate war of self-defense, indeed a war for its survival as a nation. Calling for “peace” in the abstract is meaningless in these circumstances.

The Ukraine Solidarity Network (U.S.) supports Ukraine’s war of resistance, its right to determine the means and objectives of its own struggle—and we support its right to obtain the weapons it needs from any available source. We are united in our support for Ukraine’s people, their military and civilian defense against aggression, and for the reconstruction of the country in the interests of the majority of its population. We stand in opposition to all domination by powerful nations and states, including by the United States and its allies, over smaller ones and oppressed peoples.

We uphold the following principles and goals:

1) We strive for a world free of global-power domination at the expense of smaller nations. We oppose war and authoritarianism no matter which state it comes from, and support the right of self-determination and self-defense for any oppressed nation.

2) We support Ukraine’s victory against the Russian invasion, and its right to reparations to meet the costs of reconstruction after the colossal destruction it is suffering.

3) The reconstruction of Ukraine also demands the cancellation of its debts to international financial institutions. Aid to Ukraine must come without strings attached, above all without crushing debt burdens.

4) We recognize the suffering that this war imposes on people in Russia, most intensely on the ethnic and religious minority sectors of the Russian Federation which are disproportionately impacted by forced military conscription. We salute the brave Russian antiwar forces speaking out and demonstrating in the face of severe repression, and we are encouraged by the popular resistance to the draft of soldiers to become cannon fodder for Putin’s unjust war of aggression.

5) We seek to build connections to progressive organizations and movements in Ukraine and with the labor movement, which represents the biggest part of Ukrainian civil society, and to link Ukrainian civic organizations, marginalized communities and trade unions with counterpart organizations in the United States. We support Ukrainian struggles for ensuring just and fair labor rights for its population, especially during the war, as there are no military reasons to implement laws that threaten the social rights of Ukrainians, including those who are fighting in the front lines.

There are more than 100 initial signatories to this statement, including the individuals listed below. To add your own name, please go to https://linktr.ee/ukrainesolidaritynetwork.

The name of the organization is listed for identification purposes only. The endorser’s position does not necessarily reflect the opinion of the institution.