Socialists Must Fight to Defund the Police 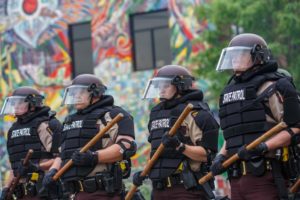 Nearly six years ago in Staten Island, New York, Eric Garner was murdered by the New York Police Department. As gruesome as this murder was, liberals who advocated police reform thought it might be a turning point on the issue of police use of force in the United States. After all, Fox News and similar racist defenders of the police did their best to pick apart the murder of Michael Brown in Ferguson, Missouri to give every possible justification to his murderer. With Garner, what made the murder so gruesome also seemed to make it so powerfully undeniable. It was on video. The violence was clearly one-sided. And most heartbreakingly, Eric Garner was telling the police officers “I can’t breathe” seconds before they killed him.

Five years have passed. Despite the video, the seemingly undeniable evidence, a Richmond County grand jury decided not to indict the cop who killed Garner, Daniel Pantaleo. And on May 25, 2020, yet another police murder of an unarmed Black man, George Floyd, was captured on video, once again pleading with the police officers “I can’t breathe” before he was killed. Sadly those who organize against police murder and violence knew that video footage was not going to change anything. Decades before George Floyd and Eric Garner, Adolph Lyons was choked by the LAPD until he passed out. While he survived, his lawsuit against the city of Los Angeles revealed that sixteen people–twelve African-American–had been killed by chokeholds by LAPD officers. His lawsuit went all the way to the Supreme Court where, in 1983, the Court held that he did not have standing to challenge the LAPD’s chokehold policy.

What happens in reaction to the seemingly unstoppable nature of police murder in the United States is rage. As Black liberation fighter George Jackson wrote in one of his many letters compiled in the book Soledad Brother:

“When the peasant revolts, the student demonstrates, the slum dweller riots, the robber robs, he is reacting to a feeling of insecurity, an atavistic throwback to the territorial imperative, a reaction to the fact that he has lost control of the circumstances surrounding his life.”

And thus the city of Minneapolis went into open revolt against the police that murdered George Floyd. There are two common reactions on the Left to these kinds of uprisings and both could be seen in reaction to the one in Minneapolis. One seeks to totally disavow the revolts as part of a revolutionary socialist project, the other seeks to define the revolts as revolution. This discourse lasts for a few days, and then dissipates until the next revolt.

Socialists are not spectators. It is not our job to provide commentary on revolts that happen in reaction to police murder. Rather, the question we should seek to answer is what to do after the revolts are over. How can the cycle of police murders be broken? What are the steps we must take to end racist police violence?

The answers of liberals have been varying degrees of dysfunctional and feckless. Because the details of the murder of Michael Brown were so hotly debated, requiring body cams on police was often held up as the solution. But police violence has been captured on video for decades now and nothing has happened. Thus liberals have fallen back on the vague promises of so-called “community policing” (a euphemism for increasing the number of police officers occupying neighborhoods) and implicit bias trainings. These misunderstand the problem entirely–the problem is not merely the quality of police interventions but the quantity of police interventions.

The modern police force is treated as a general emergency response force though it is trained to arrest and kill. In addition to targeting Black communities and other communities of color, people with mental health problems are also often the victims of police violence. Police are the proverbial hammer that sees everything as a nail; they do not protect and serve, they assault, detain, and murder.

Thus an increasing number of socialists see that the solution to the problem of police violence is the end of modern policing itself, not its reform. There are still some segments of the Left that view this goal of police abolition as “maximalist” or “utopian,” and indeed dismantling one of the most powerful armed forces in human history (which with “Blue Lives Matter” flags and Punisher tattoos becomes more and more like a kind of nationalist gang) is no small task. But the road to this supposed utopia is fairly straightforward, and the decarceration platform of a DSA candidate shows the steps we should take down this road.

While all of New York City DSA’s candidates are running on a decarceration platform, I am going to focus particularly on Phara Souffrant Forrest and the goal of defunding the police. Defunding the police may seem like an underwhelming solution to police violence, but it is a great platform for socialists to campaign on because it is a concrete demand that can be made by both our electeds and membership generally and it is a demand that fits nicely into our broader orientation of class struggle, particularly during the COVID-19 pandemic.

New York City is haunted by the memory of its near bankruptcy in October of 1975, a major political moment in U.S. history where neoliberalism won a major victory by forcing the City to adopt a range of austerity cuts to social services in return for being bailed out. And that fear is not irrational – just like President Gerald Ford told New York City in 1975 to drop dead (contrary to popular belief, not literally), Mitch McConnell is insisting that the federal government tell local governments in need of bailouts to also drop dead. With this in mind, the City government under Mayor Bill de Blasio is looking at several cuts to social services, such as not opening public pools, eliminating the Summer Youth Program, and so forth.

What has not been on the chopping block is the budget of the New York Police Department. This is neoliberalism at its essence, a recognition that, to protect the status quo from the rage of desperation described by George Jackson in reaction to police violence and to capitalist immiseration in general, a large police force is needed. The NYPD budget has steadily grown over the years, including with the express approval of the NYC City Council, despite crime in the City decreasing.

Thus the debate over the budget embodies how racist police violence is situated in class struggle. At the time when working people need support more than ever just to survive, particularly Black workers who are disproportionately in “essential services” and disproportionately dying of COVID-19, that funding is instead going towards brutalizing them. The Policing & Social Justice Project has proposed a $1 billion cut to the NYPD over four years. Phara helpfully connects her platform of Medicare for All, cancelling rent, and a Green New Deal to the goal of defunding the police. As her platform says, police budget cuts can redirect funding to community investment, healthcare, housing, and jobs. Those budget cuts can be supported with other demands of decarceration aimed at reducing the number of police interventions, such as decriminalizing simple drug possession and sex work. The so-called War on Drugs (in reality a war on Black America in response to the Black Panthers and others terrifying the ruling class) expanded police department budgets to create the monstrous militaristic departments we have today–defunding the police can deflate them and thus save lives while redirecting money to better our communities.

One of the most foolish actions of the NYPD in its history was their quasi-strike in late 2014 and 2015 in response to what they saw as insufficient support from Mayor de Blasio against the backlash from the murder of Eric Garner. They perhaps bought too much into their own lies that they are the only thing standing between “good citizens” and inhuman “criminals.” Rather than showing the public how important the police were, the slowdown resulted in a decrease of major criminal complaints and showed that less policing actually made communities safer.

A major decrease in police budgets can show working people that the police have been harmful to our communities rather than protectors. To prevent more racist murders by the police, to stop austerity, and to support social programs, socialists must work to defund the police.

Originally posted at The Organizer.