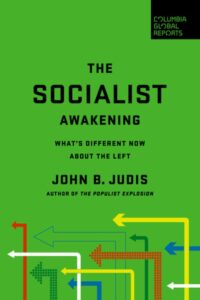 John Judis sees America today awakening to socialism, but he fears that orthodox Marxism and Trotskyism may keep the movement from achieving its potential to bring about reforms that could create something like Scandinavian social democracy. Visions of profound social change and radical cultural views about gender, open borders, and calls to abolish the police will have to be abandoned. And, he thinks, it may not be socialists who carry forward the fight for socialism but rather progressives and even moderates who will be driven to change the system by the current combination of health, economic, and environmental crises. Maybe, he suggests, following Erik Olin Wright, even the word “socialism” should be abandoned. Looking into the future Judis sees the past: the New Deal and Scandinavian social democracy.

Judis, who has been an editor at The New Republic, The National Journal, and Talking Points Memo, has lately been devoting his time to writing short books aimed at explaining the contemporary political experience: The Populist Explosion, The Nationalist Revival, and now The Socialist Awakening. Responding to the Bernie Sanders campaign and the spectacular growth of the Democratic Socialists of America, Judis asks, what are the prospects for socialism in America? (While there is a chapter about “British Socialism and Nationalism” this is really a book about socialism in the United States.) He attempts to answer this question both by looking at the history of the socialist movement and the contemporary context to explain the recent interest in socialism. He refers to some of the classic literature on American socialism—from Werner Sombart to Daniel Bell—and discusses those he sees as the movement’s major figures from Eugene V. Debs and Victor Berger to Bernie Sanders and Alexandra Ocasio Cortez. He also looks at the Democratic Socialists of America and fears that it has already veered off track.

Judis’s thesis, and he puts it simply, is that orthodox Marxism is the problem. Following Daniel Bell, he sees Marxism as religious, chiliastic, apocalyptic and therefore not political and out of touch with practical realities. In America, Marxism dooms any political group to failure. The author begins with an appreciation of Bernie Sanders and Sanders’ idol, the turn of the last century socialist leader Eugene V. Debs. But then Judis drops Debs because “the Socialist Party, Debs insisted, would not cooperate to pursue immediate reforms with the two capitalist parties.” Finding Debs too radical, Judis turns to Victor Berger, the Milwaukee socialist of the early 1900s. Acknowledging that Berger was a racist, Judis nevertheless admires his ability to build a reformist urban political machine. Berger was not a romantic revolutionary but a practical politician, and he is the real forerunner of Bernie Sanders, says Judis.

Judis supports Sanders’ progressive program, but sees it advancing through the liberal wing of the Democratic Party. He believes, correctly I think, that there are few socialist politicians of any significance beyond Bernie Sanders and Alexandra Ocasio Cortez. With Sanders destined to fade from the scene and AOC one of the few remaining standard bearers, Judis places his hopes in figures like Elizabeth Warren—“She’s really a democratic socialist”—and other progressives who may be able to carry the movement forward.

Sanders’ campaign, of course, led to the enormous growth of the Democratic Socialists of America (DSA), today with some 70,000 members. According to Judis, this expansion of DSA was all right at first, “By backing Sanders, the DSA embraced a post-Marxist democratic socialism.” But then the Marxist fly got in the social democratic ointment. How did that happen?

Well, writes Judis, it all began back at the University of Chicago when Bernie Sanders was a student there and joined the Young People’s Socialist League. Michael Harrington in New York was the leading intellectual of YPSL and the inspiration for what eventually became DSA, but there were two figures in Chicago to whom Judis traces all of the problems to come: Joel Geier and Mike Parker. While Harrington wanted to work in the Democratic Party, the dangerous Marxists Geier and Parker were interested in building a labor party. That wasn’t on the agenda, but eventually they would hook up with “Marxist theorist” Hal Draper and together the three—in what is too complicated a story to go into either for Judis in his book or for me here—they contributed to the creation of three little organizations—the International Socialists (IS), Solidarity, and the International Socialist Organization—some of whose members are active today in DSA.

So, as Judis sees it, there is today a struggle within DSA between the wholesome Berniecrats who want social democracy and those Marxists, who he calls “latter-day Trotskyists,” with apocalyptic visions of radical change. He writes, “Some young DSA members became convinced by reading and discussion that Marxist socialism made sense.” (Watch out for those study groups!) He continues:

These orthodox Marxists made up a large part of DSA’s most active core. Many of them function through organized caucuses that take positions and run slates for national leadership. Bread & Roses [caucus] has attracted these organized Marxists.

He believes that the former members of the IS, Solidarity, and the ISO who have joined DSA and hooked up with caucuses like Bread & Roses threaten to drive the organization into the ditch. I found it surprising to find myself named as the “elder statesman of these groups,” which only reveals how little Judis understands DSA.

Before the explosion of 2016, DSA’s politics were left social democratic. The intellectual leader of the group was Joseph Schwartz who shaped the broad contours of the group’s ideology in the 2000s. Schwartz saw Marx as one of the central figures of democratic socialism, but he wanted to “blend” Marxism with anti-racism, feminism, environmentalism. He also often cited André Gorz’s notion of “non-reformist reforms” as the key concept in the contemporary struggle for socialism.

It was within this framework—in a DSA where most members were in their sixties—that a handful of younger thirty-something DSA members and a network of members of the Young Democratic Socialists (YDS) emerged around 2015, leaning a little further left. They formed first a “Left Caucus,” then a group called “Momentum” (after the Jeremy Corbyn supporters in the British Labour Party), and then created Bread & Roses. But the leaders of that caucus rejected revolutionary socialism, which they defined as “insurrectionism,”

Judis’ vision of DSA as having been taken over by the “latter-day Trotskyists” who threaten to poison the well of wholesome, reformist Berniecrats is simply wrong. The tremendous expansion of DSA in the 2010s and the weakness of other left groups, including the complete collapse of the ISO, made DSA enormously attractive to other leftists. Less than 100 members of Solidarity, with no coordination or common strategy, gradually drifted into DSA starting in 2016. I was among the first. Since 2019, dozens of ISO members have also joined. Once in DSA, many but not all Solidarity members joined Bread & Roses, though I was not one of them.

DSA also attracted many other left organizations, including several orthodox Trotskyist groups and a neo-Stalinist organization. The many young radials being attracted to DSA also generated several other caucuses that defined themselves as revolutionary Marxist or even anarchist. Today Marxism forms the framework for much of the discussion within DSA, certainly among its more active members.  DSA’s National Political Committee is made up of people from various caucuses who, beyond DSA’s big-tent democratic socialism, do not share a common leftist ideology.

Ultimately, John Judis’ The Socialist Awakening is disappointing. He has rediscovered liberalism or progressivism, which were in some form always his politics. He puts his hopes in progressive think-tanks and publications: the Economic Policy Institute, the Nation, the New Republic, the American Prospect, N+1, In These Times, Mother Jones, and the Intercept. He looks to a host of NGOs, particularly the youth groups such the Sunrise Movement and United We Dream Action. He believes that Elizabeth Warren, whom he considers a socialist, and other Democrats like Senator Sherrod Brown represent the future of the left. But then for Judis, “Many elected Democrats are socialist in all but name.”

Judis has nothing to say about the questions facing the socialist movement today. He has no discussion of how to rebuild the labor movement, nor of how to unite the labor and social movements, and, of course, he rejects the idea of trying to construct a political party that would represent working people and all of the oppressed. He doesn’t touch on discussions about racism and identity politics or gender issues—except to warn against them. There are no new ideas in this book and one cannot imagine it having much of an effect on radicalizing young people interested in socialism.

Posted October 21, 2020 Uncategorized by Dan La Botz
About Author
DAN LA BOTZ is a Brooklyn-based teacher, writer and activist. He is a co-editor of New Politics.