Dear Friend of the Campaign for Peace and Democracy,

We are writing at this critical moment to invite you to sign the CPD statement "End the Killing of Students Now: Peace, Justice, and Democracy for Mexico." Thanks to all of you who have already signed — please invite your friends and social media contacts to sign as well. We plan to publicize the statement widely — to students, parents, and their allies in Mexico, to Mexican and Canadian government officials, President Obama, Secretary of State Kerry, key members of Congress, as well as to the media in Mexico, the U.S. and Canada.

The statement is below, along with a list of initial signers. We very much hope you will add your name — a large number of signatures can make a real difference and will let people in Mexico know they are not alone. The statement is now being translated into Spanish and Farsi. We welcome volunteers to translate it into other languages.

To add your name, see the emerging list of signers and their affiliations, and/or make a tax-deductible donation to publicize the statement, please go to our website.

You don’t have to donate in order to sign, but please do give if you can, and as generously as you can. 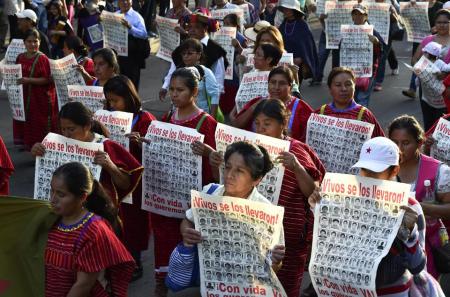 Women hold banners with portraits of the missing students during a protest in Mexico City on November 5, 2014 (AFP Photo/Yuri Cortez)

Statement by the Campaign for Peace and Democracy
November 13, 2014

END THE KILLING OF STUDENTS NOW: PEACE, JUSTICE, AND DEMOCRACY FOR MEXICO
http://www.cpdweb.org/stmts/1024/stmt.shtml

We send our solidarity to the parents of the dead and missing students, to the millions of student protesters, and to the Mexican people!

We feel pain, anger and outrage at the kidnapping, torture, and executions of rural students from the teachers college of Ayotzinapa, Guerrero, Mexico on September 26, 2014, at the hands of police in collusion with groups linked to drug trafficking. This was a crime against humanity. The 43 missing and three of the six whose murders have been confirmed are young students, mostly children of poor rural families. For decades, especially for the past six years, the school where they were studying, the Rural Normal "Raúl Isidro Burgos," a school specializing in training teachers to serve the rural and indigenous poor, as well as rural teachers colleges as a whole, have been subjected to an intense political attack by the state and powerful business groups.

These crimes against humanity, sadly, are the rule not the exception in Mexico. And they are often carried out or tolerated by different levels of the Mexican government and/or in collusion with the drug gangs. As the protesters in Mexico have repeatedly declared, Fue el Estado (It was the state). The federal government is responsible for the safety of people traveling on federal roads, as the students were doing. The federal army has a strong presence in Iguala, the site of the massacre, and was nearby at the time and aware of the attacks. It did nothing. The federal army itself carried out another mass execution of 22 young people in the same region, in the town of Tlatlaya, in the neighboring state of Mexico in June, 2014. The army and the federal government then attempted to cover up these executions in Tlatlaya, a cover-up that included harassing and threatening witnesses. The investigation that followed the September 2014 massacre of the students from the Ayotzinapa college has been deliberately incompetent and staged as an effort to deflect blame to the local level, to cool out protest without attempting to find the disappeared or to get to the roots of the crime.

The depth of the Mexican crisis, the state and drug cartel violence, and the perception that the electoral route is closed because of widespread fraud, manipulation and corruption, means that Mexican popular movements have to work in the middle of a boiling cauldron of repression and violence. The United States is deeply involved in this cauldron through military agreements with the Mexican armed forces in carrying out this repression in Mexico under the cover of the drug war. And Canadian mining companies are also deeply involved as they seize and despoil the waters and lands of Mexican peasants and carry out brutal repression through private armies aided by various levels of the Mexican government against many Mexican communities. The giant oil corporations welcomed in by the privatization of Mexican oil will be protected from popular protests by the Mexican armed forces with the ongoing massive military assistance of the United States. U.S. and Canadian companies and their governments are involved in direct and indirect ways alongside the Mexican state in the repression of the Mexican people and the despoliation of their society.

The drug war, a battle between rival drug gangs, generally linked to different groups of the local, state, and federal authorities, has provided a cover for the renewal of the dirty war of the 1970s, when the Mexican government carried out large numbers of assassinations and forced disappearances in an attempt to stop rising protests and guerrilla movements. State-executed assassinations and disappearances continued at a reduced level in the following decades but have sharply escalated since 2006 and even more so since Enrique Peña Nieto became president in 2012.

The growing repression is only partially linked to the drug wars. It is intimately linked to attempts to eliminate resistance to the ongoing neoliberal offensive in Mexico, an offensive being promoted by business interests and the governments of Mexico, Canada and the United States. The harsh human consequences of the neoliberal offensive in Mexico — a sharp increase in poverty and inequality, the downgrading of the labor market, and the dispossession of large numbers of rural Mexicans from their lands — have been generating resistance, as have the depredations on communities being carried out by the drug gangs, the police, private security forces of mining companies, and the armed forces. For example, many community militias have been formed in the state of Guerrero and the neighboring state of Michoacán to defend their communities against these aggressions. But the state and national governments have arrested the leaders of the community militias and sought to disband them as they continue to tolerate the attacks by the drug gangs and by the local and state government.

The recent changes to the Mexican Constitution promise to speed up the dispossession of rural communities as they allow for the privatization of oil and other natural resources and permit the government to remove local communities for the sake of resource development — communities that are already being dispossessed informally by gangs working for business interests, or by the despoiling of their land by mining development. As resistance has increased, so has repression.

We express our solidarity with the bereaved but courageous parents of the dead and disappeared students of Ayotzinapa and with the millions of Mexican students and citizens demanding justice and a different Mexico, a Mexico of peace, democracy, social well-being and justice. We support their demand for an independent international inquiry not only into the events of Iguala and Tlatlaya but also into the thousands of disappearances, killings and human rights abuses that have been carried out under the umbrella of the drug war. We also call for an end to the role of the United States in facilitating these horrific abuses through the military aid provided in the Mérida Plan and military training, as well as the systematic human rights violations being carried out to protect Canadian and U.S. companies.

We are heartened by the massive size and national scope of the protests. Thousands of protesters, including family members of the missing students, blocked the Acapulco, Guerrero international airport for three hours interrupting flights on November 10. 22 of the 81 municipalities of the state of Guerrero have been taken over by protesters. Nearly four million students staged a national strike on November 5 and the inter-university committee that organized this third national action within the last month continues to plan new protests. The scale of the protests has grown and the demands have become more radical. The righteous indignation of the Mexican people has not succumbed to fatalism or cynicism nor have they been fooled by the various maneuvers of the federal government attempting to demobilize the protests. The more the mobilizations grow and radicalize, the more likely are attempts to end them by force. We must raise awareness of the ongoing struggles and violations of human rights in Mexico. Their struggle is our struggle. We are all Ayotzinapa!

To add your name now, go to the Campaign for Peace and Democracy website.