Should We Create Memes about the War in Ukraine? 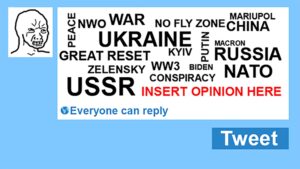 In the postwar period, the German philosopher and critic Theodor Adorno famously condemned directly political artworks, stating “To write poetry after Auschwitz is barbaric.” Today we might well ask whether it’s possible for onlookers to  create memes about the war in Ukraine. Too often even our most sincere statements of solidarity expressed on social media seem crass, not unlike gestures made by outlets, such as the renaming of the cocktail “Moscow Mule” to “Kyiv Mule.” What can Adorno teach us about representations of warfare in the social media age?

Even the familiar opinionated posts and trite gestures we have come to expect, flags replacing profile pics, or declarations that we are all, for example, “Parisienne” (as seen following the Paris attacks of 2015), were curiously and thankfully absent in the immediate period following Putin’s reckless orders. It felt as if the vast online commentariat concurred with the sentiment behind Adorno’s famed dictum that it is impossible to make art about the horrors of war, argued in his 1949 essay Culture Critique and Society. Yet the silence was short lived as people from varied national and political backgrounds soon mobilized to express their opposition to the Russian invasion. This was to be expected in countries where political freedom permits expressive demonstrations of opinion. However, in juxtaposition with rolling news footage of civilians fleeing Ukraine and cities being bombed out, this kind of Facebook posting has demonstrated the vast gulf between those suffering the direct effects of the war (not only Ukrainians but also Russian protestors) and online spectators viewing from their safe homes (or, in the age of the internet, their offices, or their commute or while shopping).

This is not a simple case of stating that no one has a right to speak for disaffected populations or minorities (though that case could arguably be made). Rather, Adorno’s idea is that artistic representations or commentaries on warfare are a form of entertainment from which the commentator and audience can “elicit enjoyment.” Anyone distant from the war (i.e. not involved in it or affected by it directly) would for Adorno be better off not commenting, even though geographical distance is not his target (and that—as they will comment anyhow— their comment will not achieve what they intend it to). Above all, the ability for people to elicit enjoyment from representations of conflict goes to show how far capitalism has come in creating a society where empathy is basically not possible. As Adorno wrote on his essay of 1962, Commitment, with characteristic polemic style: “The so-called artistic representation of the sheer physical pain of people beaten to the ground by rifle-butts contains, however remotely, the power to elicit enjoyment out of it.”

For Adorno, portrayal of conflict risks a repetition of the sadism of violent acts, not because we are all inherently sadistic (whether this be the case or not) but because the world of culture is linked to the industrial and military complex that fuels war. As such, the act of social media posting and viewing other people’s feeds can be seen as a form of participatory entertainment that feeds the profits of social media giants.

What does this tell us now?  We certainly ought not condemn Russian, Ukrainian, and Eastern European artists who find themselves on the front line of a war and wish to draw attention to its horrors so they might convince the west to send more aid. This might rightfully continue with us onlookers amplifying their messages by sharing them so our governments may do more to head off Putin’s imperialist gambit. What Adorno does tell us though is that many of our communicative efforts are too embroiled with capitalism to be able to stand outside it and critique it. This could not be truer of the age of social media, when our every post feeds into the profits of the data capitalist giants.  And aside from fueling the capitalist machine, our knee jerk offerings do little but perpetuate a tendency to rigidly identify and categorize the world around us into over simplified statements which feed conflict.

Right now the Left is split on social media between those who outright condemn Putin, those who stop short of condemnation, qualify it on the basis that the US and the UK invade Iraq and Afghanistan, or support it outright. Such an identificatory split has people posting on social media in rage, creating more data, whilst doing nothing material to support the people of Ukraine and Russia. Aside from being a staunch defense of artistic abstraction (something for which we can have little use in the present moment), Adorno’s reticence to support outwardly political art might at least give us pause for reflection, long enough to ask whether what we have to say might be better than silence.

Mike Watson is a UK born art and media theorist, critic and curator who holds a PhD in Philosophy from Goldsmiths College. Watson curated at the 55th and 56th Venice Biennale, as well as at Manifesta12 in Palermo. He has written regularly for Art Review, Artforum, Jacobin, and Radical Philosophy.