On Scott Ritter’s Attack on the White Helmets 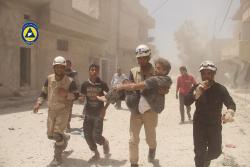 It’s painful to read Scott Ritter’s “The ‘White Helmets’ and the Inherent Contradiction of America’s Syria Policy” and see him joining the ranks of the conspiracists on Syria.

As a weapons inspector for the United Nations Special Commission charged with finding Saddam Hussein’s weapons of mass destruction, he was perhaps the most aggressive and outspoken inspector claiming that Saddam was hindering inspections and could be hiding weapons caches. However, after he left UNSCOM in 1998 he gradually had a political conversion and by 2002 was telling the media that the UN had in fact forced Saddam to destroy his weapons of mass destruction in the ‘90’s. He was given some national coverage, but Senator Kerry refused to allow Ritter to appear at crucial hearings on Iraq before the Senate Foreign Relations Committee. After Bush’s “Shock and Awe” invasion of Iraq Ritter did admirable work fighting the hysterical charges that Iran was amassing nuclear weapons. I interviewed him on the subject in 2005.

But with this article he takes a conspiracist view, denying the obvious motivations of tens of hundreds of thousands of Syrian people in trying to remove the Assad dynasty and instead seeing only manipulation by U.S. intelligence and terrorists. He’s a former intelligence officer and like a number of former government officials has a predilection to see political affairs as geopolitical plots and conspiracies, but that doesn’t make them so.

I want to refute some of his allegations (none of which are sourced with links or footnotes).

Ritter: “moderate opposition to Assad that existed only in the minds of Washington politicians, the reality was that what Power called the ‘Syrian opposition’ was, in fact, largely composed of Islamist fundamentalists…”

My response: For months in 2011 tens of thousands of Syrians marched peacefully against the regime in city after city. Their slogans were democratic and non-sectarian. These demonstrations ended only after so many were shot down or taken to Assad’s torture-to-death prisons and “hospitals.” Even then the non-violent Local Coordinating Committees continued their work and communities set up local governing bodies in areas liberated from the tyrant.  Read Burning Country.

Ritter: “And yet, when Islamic State launched a major offensive against Syrian government forces in and around the ancient city of Palmyra, in May 2015, the U.S. responded with a single airstrike that targeted Islamic State antiaircraft artillery.”

My response: Assad has an air force busy blowing up civilians. He could have defended Palmyra himself. I don’t want the U.S. doing bombing, but the idea that the U.S. is at fault for not doing his job for Assad in Palmyra is bosh.

My response: They never claimed to be apolitical. They have openly opposed the regime from the start as all decent people should. They do claim to rescue anyone who needs rescue and as far as I can tell that is true.

Ritter: “the organizational underpinnings of the White Helmets can be sourced to a March 2013 meeting in Istanbul between a retired British military officer, James Le Mesurier—who had experience in the murky world of private security companies and the shadowy confluence between national security and intelligence operations and international organizations.”

My response: It’s kind of ironic that Scott Ritter, a former aide to General Schwartzkopf, should dismiss Le Mesurier because of his military background. I don’t know about the man, but he doesn’t seem to be hiding. Here’s his website. Maybe it’s all nefarious, but that requires proof, not innuendo.

Ritter: The White Helmets have “120 teams located throughout rebel-held Syria—including areas under the exclusive control of Al Nusra Front and Islamic State.”

My response: This is crap. The Islamic State doesn’t let any independent force like the White Helmets operate in its areas. Al Nusra is different. From what I understand they don’t have totalitarian control of areas in which they operate. They are in and around Free Syrian Army military units usually fighting against them, but sometimes cooperating with them like in the break out attempt from Aleppo a month ago.

Ritter: “video clips of known White Helmet members, in their distinctive uniform, openly celebrating with Al Nusra fighters in the aftermath of Syrian government defeats, and even carrying weapons.”

My response: Show us the proof that this happened in any systematic way. I understand that there were a couple of instances of this and that the people involved were dismissed from the White Helmets.

Ritter: “for all of their heroic rescue work, the White Helmets function as an effective propaganda arm of the anti-Assad movement.”

My response: No, they function as a rescue squad that have saved tens of thousands from the rubble. Of course, they try to sway world public opinion. Syrians are being bombed day and night and they want it to stop.

Ritter: “The images and videos depicting the work of the White Helmets inside Syria are exclusively self-produced and distributed.”

My response: Who else but Syrians are in the besieged and bombed out areas. Assad has killed off independent journalists who’ve tried to report on Syria.

Ritter: “the United States is the No. 1 funder and facilitator of one of the most effective recruiting tools used by terrorists inside Syria today—the White Helmets.”

My response: This is revolting. First he uses the term the “anti-Assad movement,” but now they’re all “terrorists” — exactly mimicking Assad’s “analysis.”

Ritter: In remarking on the decision to give the Right Livelihood Award to the White Helmets he writes, “No mention was made of the murky role played by the White Helmets in fabricating a narrative about a Russian-Syrian airstrike against the Urem al Kubra aid convoy in a way that diverted attention away from Al Nusra Front.”

My response: So Al Nusra has a secret air force that bombed a relief convoy that was sending in material that would be helping people in its area? This is beneath contempt, like the conspiracies seen by some other misguided ex-intelligence professionals who think Syrian oppositionists sarin gassed their own children to gain sympathy from the West and intervention from Obama. The credibility of the Russian-Syrian claims regarding the aid convoy have been convincingly debunked.

Ritter: Since the White Helmets are “operating side by side, and often in cooperation with, Al Nusra Front (and even Islamic State) on the other—the ability to distinguish hero from villain becomes a challenge.”

My response: Again he repeats the claim that the WH operate in Islamic State areas. I’ve never heard that claim before. Prove it.

Conclusion, I’m very glad to see the White Helmets get the Right Livelihood Award along with these other human rights heroes and that Democracy Now! had a favorable report on them on October 13. There is more to the world than great powers and their machinations. Sure, the world’s intelligence agencies are looking for allies and stooges. Popular forces don’t have a lot of choices. They have to seek aid where they can, hoping not to get ensnared. So far the White Helmets have done so. Good luck to them.

Stanley Heller is Administrator of Promoting Enduring Peace and host of “The Struggle” Video News, stanley.heller@pepeace.org.

Posted October 15, 2016 Syria, U.S. Foreign Policy by newpolitics
About Author
Stanley Heller is Administrator of Promoting Enduring Peace and host of the TV news magazine “The Struggle.” He’s author of “Zionist Betrayal of Jews: From Herzl to Netanyahu" and hosts the TV program “TheStruggle”. See https://thestrugglevideo.org Contact him: mail@thestruggle.org