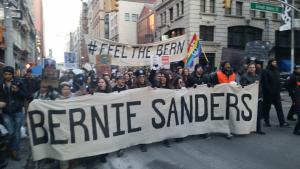 Some 3,000 supporters of Bernie Sanders marched through the streets of Manhattan yesterday from Union Square, historic site of labor and left rallies since the beginning of the last century, to Zuccotti Park, the site of the Occupy Wall Street movement of 2011.

The mostly young, white crowd, dotted by people of color and older supporters, returned to the place that five years ago turned the national conversation from the Tea Party to questions of economic inequality and the role of money in politics. 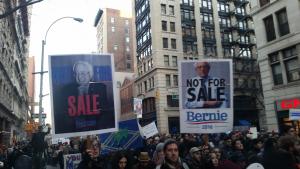 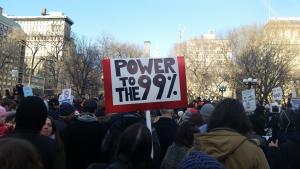 The marchers screamed “Bernie” and chanted slogan’s from Sanders’ speeches, as they waved mostly homemade placards. There were Bernie stickers, life-size photos of Bernie, and Bernie puppets. 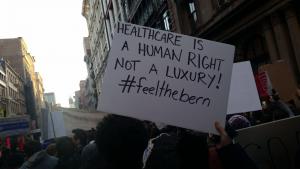 Among the most popular signs was one reading “Not Me—Us” referring to Sanders’ call for a “political revolution” that would involve all of us. Many onlookers took photos and videos, many others waved or made the V for Victory sign, yet others in offices gave the thumbs up, while some came out on balconies to cheeer.

Most had come to the demonstration through People for Bernie or their local groups of Bernie campaign activists.

Among the marchers were leftists from the Democratic Socialists of America and Socialist Alternative, though most of New York’s many radical left groups were notably absent. The photos here give a sense of the demonstration. 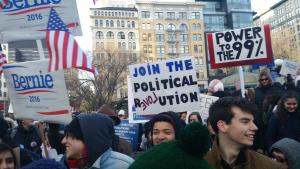