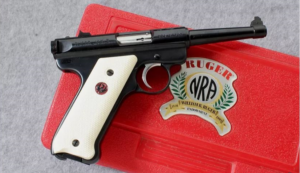 The U.S. company that has sells the most guns is Sturm Ruger. It’s sometimes in the news after a massacre by one of its semi-automatic guns. For instance, its AR-556 pistol was used in the 2017 church massacre in Texas, and the 2021 massacres in Boulder, Colorado and Indianapolis, Indiana. Concern for its sales of its 10/20 model to Israel, which uses them to shoot .22 caliber bullets in Palestinians as a way of “crowd control”, led to the creation of the coalition called “No Rugers to Israel”. There’s less attention paid to the enormous support Ruger gives to the far-right organization called the National Rifle Association (NRA), a group that helped create the climate in which the January 6 attempted insurrection was a sudden storm.

The NRA was started after the Civil War by two Union soldiers who wanted to improve marksmanship. The group testified in support of the first federal gun law in 1934, which cracked down on the machine guns beloved by Bonnie and Clyde and other bank robbers. For many decades it was a club of hunters and sportsmen, but that was long ago. Now it’s intensely political led by men hysterically afraid of regulation which they consider socialism and tyranny.

Back in 2018 the New York Times Magazine took a look at the covers of “The American Rifleman” which is given away free to NRA members. For the magazine’s first 50 years (since its founding in 1923) covers would be about hunting, marksmanship and gun safety, but in 1977 a man who had been the first head of the U.S. Border Patrol, Harlon Bronson Carter, took over the group. Then the organization became heavily political. “American Rifleman” covers changed. Politicians to love or to hate were frequently on the cover. The Rifleman started hammering away about “freedom” and the sanctity of the second amendment and the supposed terrifying threat of crime. Harlon Carter was fiercely against gun control. When asked by a member of Congress if he was so against a screening process would he accept “convicted violent felons, mentally deranged people, violently addicted to narcotics people to have guns”? He replied it was the “price of freedom”.

But Harlon Carter was a cupcake compare to Wayne LaPierre who became the chief exec of the NRA in 1991. In 1992 he predicted President Clinton’s Administration would be a “gun-grabbing goon squad”. Covers of “The American Rifleman” grew more and more hysterical. In 1994 it had a “Stop the Rape of Liberty” with a man grabbing the Statue of Liberty and pulling at her clothing. LaPierre brought up a new theme in his first book, published in 1994. In it he talked about insurrection. “[T]he people have a right…to take whatever measures necessary, including force, to abolish oppressive government.” That year after a gun control measures passed his article in a “Special Report” in the Rifleman was called, “The Final War Has Begun“.

In 1995 LaPierre signed a fund-raising letter asserting that President Clinton’s ban on assault weapons “gives jackbooted government thugs more power to take away our constitutional rights, break in our doors, seize our guns, destroy our property and even injure and kill us.” This just added to the radical-right rhetoric that was influencing unhinged minds in those days who armed themselves to the hilt and formed groups called “militias”. A week after LaPierre’s letter four-year NRA member Timothy McVeigh blew up the Murrah Federal Building in Oklahoma City and killed 141 people. The NRA was widely criticized in the media and LaPierre made a concession that his rhetoric was sometimes “overblown”.

That was just a hiccup, however, In 1997 a cover featuring Charlton Heston talked about a “crusade” to defend the Second Amendment. A couple of years later it featured a now Alzheimer-diminished Heston challenging Al Gore to take away his rifle from “his cold dead hands”. In 2015 the cover was apocalyptic, the words “Are you prepared for the 700 most dangerous days American has ever faced?” over some fanciful red death ray.

Days after seventeen students were killed by a gunman in Parkland Fl, on Valentine’s Day in 2018 one of the NRA’s TV stars said, “mainstream media loves mass shootings”. A week later LaPierre spoke to the Conservative Political Action Conference and ranted on about socialism in the U.S. and Europe and how socialists were smearing gun rights advocates. At the end of that bloody month LaPierre called NY Gov Andrew Cuomo a “communist” because of NY gun laws. In November the Rifleman cover featured a huge wave hitting the Statue of Liberty along with the message “Your Vote is All that’s Prevents the Socialist Wave on 11/6.”

When Philando Castile, who had a permit to carry a gun and who was Black, was shot by a police officer during a traffic stop, the NRA was silent. The Baltimore Sun editorial board commented with a piece entitled “Gun Rights for Whites Only”. Ironically (sickeningly?), the NRA on twitter describes itself as “America’s Longest-Standing Civil Rights Organization.”

The NRA supported the radical-right Donald Trump and associates in the 2016 election to the tune of $50 million. An article on Salon summed up the NRA’s right-wing extremism nicely. It was entitled “NRA laid the groundwork for deadly Capitol riot for years, say gun control advocates” The article also notes, “After the January 6 attempted putsch the NRA waited nine days to comment in a tweet that we should all ‘respect the rule of law’”. Did it learn its lesson? Of course not. On April 14 it tweeted about Biden that “Joe couldn’t care less about his Oath of Office. He wants to light our Constitution on fire.”

It seems plain, even obvious that the “social welfare” organization called the NRA is a Radical-Right outfit.

Ruger donations to the NRA

Sturm Ruger and Co. has its headquarters in Fairfield, CT. It sells more rifles, revolvers and pistols than any other U.S. company. Its connections to the NRA are deep.

First there is the money. Let’s go to 2011. Ruger pledged to give $1 to the NRA for every Ruger weapon sold. By August $279,000 had be raised. The CEO at that time, Mike Fifer, said Ruger was well on its way to send the NRA $1 million. When the campaign ended in 2012 Ruger had sold 1,200,000 guns and so gave the NRA $1.2 million. The Fairfield [CT] Citizen reported on this on January 5, 2012, three weeks after a gunman used a (non-Ruger) semi-automatic weapon to kill 20 children and 6 teachers in nearby Newtown. Here’s a proud NRA video of Fifer presenting LaPierre with a giant check.

That was only the beginning. Ruger sweetened its pledge and promised to give the NRA $2 for every gun sold. After one year of this the new CEO of Ruger, Chris Killoy, gave the NRA a check for $4 million. The New York Times wrote that Ruger “directed $10 million to the N.R.A. in 2015 and 2016.” You recall that 2016 was that special year when $50 million of NRA money went to elect Donald Trump and friends. Once Trump was in donations in 2017 and 2018 declined to $1.5 million.

It’s not clear how much Ruger gave to the NRA in recent years. It was listed as an elite “Defender” rank donor to the NRA legislative arm in media releases in 2019 and 2020. How many millions in donations get you to “Defender” level is not apparent.

There’s also the money Ruger spends on advertising with the NRA. For instance in 2016 Ruger paid the NRA $8.4 million. All in all, Ruger has sent tons of money to the NRA dwarfing contributions from gun-maker Smith and Wesson.

It’s not just money, though. There’s interlocking staff and Board members. Sandra Froman who is on the board director of Sturm, Ruger is a past president of the NRA and a paid consultant for the NRA. She is also a member of the NRA board of directors. was also a former President of the NRA Foundation’s board of trustees. Then there’s the National Shooting Sports Foundation. It’s the firearm trade association whose members are all in the gun industry. It’s based in Newtown Connecticut. Its president and CEO is Steve Sanetti. From 1980 to 2008 Sanetti held various position in Ruger, including President, Vice Chairman, and Chief Operating Officer. Chris Killoy, Ruger’s current CEO, sits on its Board of Governors. Before Killoy Ruger’s Mike Fifer was on the board. Relations between the NRA and NSSF are shall we say, warm. The NSSF proclaims that the NRA and the NSSF are “generally aligned on policy issues.”

One illustration highlights the tight connection between Ruger and the extremist NRA. It’s a picture of the Ruger ~ Mark II William B Ruger Endowment Special NRA Edition on the site of the Cabelas company. It shows a blue-steel receiver with handsome ivory-covered grips. The Ruger’s site tells us that its original (2003) price was $334. We’re told its shipped in a “red Ruger commemorative case with Special Ruger/NRA crest logo.”

If Sturm Ruger ever criticized the NRA publicly, it’s not obvious. It didn’t denounce its ally, not for its hysteria before the Oklahoma bombing, not for using senile Charlton Heston to whip up frenzy, not for its massive support for ultra-right politicians in 2016 and not for “laying the groundwork” for January’s attempt to overthrow US elected government.

Ruger and the NRA seem to be joined at the hip.

Ruger doesn’t propagandize about “freedom” and “tyranny” on its own websites. It leaves that to the NRA. Ruger’s goal is to sell guns and make money. Fear of crime sells guns. Fear of a “gun-grabbing government” sells guns. The NRA creates the hysteria. Ruger rakes in the cash.

I wrote to CEO Killoy by email and postal letter asking for possible corrections or comments, but have not received any reply.

Posted May 6, 2021 Gun control, United States by Dan Fischer
About Author
Stanley Heller is Administrator of Promoting Enduring Peace and host of the TV news magazine “The Struggle.” He’s author of “Zionist Betrayal of Jews: From Herzl to Netanyahu" and hosts the TV program “TheStruggle”. See https://thestrugglevideo.org Contact him: mail@thestruggle.org

2 comments on “Ruger and the Far-Right NRA”