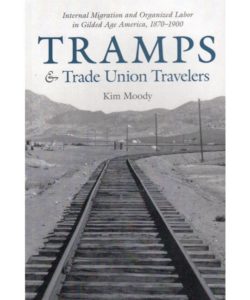 Kim Moody has written another very interesting and provocative book on labor. His other books have generally been about contemporary labor issues. This one focuses on the key issue of American Exceptionalism.

This conservative/elitist formulation says that American workers are different from other workers. They supposedly have always had less class consciousness than other workers. Exceptionalism openly says or implies that U.S. workers can never be the subjects of their own liberation. It is therefore a pessimistic support for apathy and inaction.

This position was most famously put forward in Werner Sombart’s Why There is No Socialism in the United States? He felt the “ship of socialism crashed on reefs of roast beef.” In other words, the high living standards of American capitalism blunted working class consciousness and determined that workers in the U.S. would not become the subject of the self-emancipation that Marx predicted.

This argument has been echoed through out history. In the 1960s elements of the New Left said that workers benefited from imperialism and were too “bought off” to ever make a revolution. Even today after 40 years of declining and stagnating living standards, some leftists still cling to the notion of inevitably conservative, affluent workers. Many liberals and some leftists blame Trump’s victory on the working class, even though Trump voters were more upper income than voters as a whole. Further voters are more upper income than the population as a whole.

Finally, American Exceptionalism assumes that the reason there is no labor party or militant unions in the U.S. is because of a low level of class consciousness among U.S. workers.

Moody rightly opposes this attitude. He reaffirms the high level of class consciousness of workers in the period he is studying, 1870-1900.

On face value, the proposition that blames the working class for the lack of a strong union movement and labor party seems absurd: a large proportion of American workers at any given period were immigrants! If they were not uniquely conservative in their home countries, why were they in the U.S.?

Of course, it is true that the U.S. is different than many other countries of the Global North in particular ways. It is the only Northern “democratic” country without a mass labor or Socialist Party at the national scale. The problem is blaming the working class for this difference.

Kim refutes some of the usual explanations: prosperity, the open land on the frontier, class mobility etc. On prosperity: he notes that other countries also had “prosperous” workers who were militant labor activists. On class mobility: it didn’t really exist here any more than in other countries and sometimes less. On the open land: In fact, the major movement for the period he covers, 1870-1900 was from rural areas to the cities. He also says the two-party political system is given too much credit, noting breaks from it later in the book.

The author does credit two other causes historians often cite—the divisions caused by racism and ethnic differences and repression by the state to some extent. However, on the issue of repression, he discounts the impact, noting the rarity of actual state intervention.

The factor that he thinks is most important is one that historians have downplayed: working class mobility, including mass immigration. This includes country and small-town movement to cities within a state and movement across state lines. He provides impressive statistics to show how important this factor was.

His overall thesis is that the massive mobility of the working class undermined its ability to form strong unions. He further argues that organized labor, unions and the Knights of Labor were the basis of local labor parties. Thus, mobility indirectly undermined the possibility of a labor party.

The mobility of the working class was directly related to the structure of the developing capitalist economy. Industry spread across the U.S. pulling workers in as it went. The way work was organized was more sporadic than it is today. Employers offered far less permanent employment. Work was offered only when there was an immediate market for particular products. This meant that most workers faced layoffs on a regular basis. Instead of the current pattern of long periods of steady employment followed by long periods of layoff, many or most workers only worked part of the year at any one employer. More workers worked on a similar schedule to construction workers today.

When laid off, workers would travel. if necessary, to find other work. This led to constant movement for large sections of the working class. This situation was superimposed on the overall growth of industry across the country. The most traveling took place in boom periods. In depressions workers could not afford to travel and there was less incentive.

This description of work is important in confronting an argument today: Is there a “precariat” which is separate from the proletariat? In fact, at least in this period the whole working class was precarious. Today’s partial return to this level of precarity is not a unique development. The more stable long-term employment of the post WWII period is actually the aberration in capitalist history. In other words, there is no precariat separate from the proletariat.

Also important is that the Gilded Age was actually the period of the widespread creation of a working class in the U.S. Until this period, most people including most workers saw wage labor as a temporary phenomenon. Wage workers were expected to save money and then go out on their own and become independent craftspersons or business people. Workers at first resisted being converted into proletarians. Over the course of this period, working class consciousness developed out of the general producer consciousness. “Producers” had included independent crafts people and the petit bourgeoisie. Producer consciousness was  more common before the Civil War. Working class consciousness grew as more and more workers understood wage work was likely permanent.

This is one of the key arguments that the author makes: U.S. workers had a high degree of class consciousness as shown by strikes and attempts at working class organization during the Gilded Age. This is an important argument against American Exceptionalism.

This developing consciousness crystallized into many attempts to form labor parties in opposition to the interest of capitalists. Moody outlines several attempts. One was in 1877 after the massive nationwide railroad strike when along with the Greenback party workers elected 14 congress people. This effort came under middle class domination and collapsed with the decline of unions in the depression of 1873-79.

In the mid-80s there was another attempt across the country. This fell apart with the decline of the Knights which was the basis of labor party efforts.

The author explains the decline of the Knights from 1886-87 as a result of loss of strikes which increased precarity and the general looseness of the Knights organization. These weaknesses accelerated the underlying problems caused by the mobility of the working class. He gives ideas about how the Knights could have been organized better: Support of strikes, national trades organization and more attention to solid organizing.

Finally, the AFL in 1893-4 came close to endorsing a reformist socialist platform including a call for a labor party. Moody believes that this attempt was not defeated just by pure and simple unionism but also by differences over relations with the Populists. A majority of union members supported the radical program—again showing U.S. workers did not differ markedly in attitudes from their European counterparts.

Moody relates this failure to the weakness of the overall union movement during this period. Again, this in turn was based on precarity/mobility.

Moody’s refutation of conservative dismissals of the American working class is important and very helpful. His inclusion of the mobility issue which was unique to the U.S. is also a crucial addition to our understanding of working-class development.

This book is very useful in expanding the understanding of this period and hence working-class history in general. However, in putting so much stress on mobility, Moody does underestimate other factors. He downplays the importance of repression and totally neglects the resolute opposition of the U.S. ruling class to political reformism. Though mass repression using troops and even injunctions by the courts were less prevalent than some historians suggest. exemplary actions can set a tone and certainly did in U.S. labor history.

More important even than repression is the commitment of the ruling class to laissez-faire. Until the 1930s the courts struck down many attempts at social reform including child labor laws. This allowed very little space for reformism through political action, especially on a national scale

Moody may be correct about the Gilded Age attempts at forming labor parties. However, after this period, many working class activists saw little hope in political reform and national labor parties never got too far. After the 1893-4 period that he discusses the American Federation of Labor (AFL) grew but became dominated by “pure and simple” unionism. It actively rejected legislative reform. Part of this had to do with the opening provided by the National Civic Federation, liberal bosses who wanted stability through collective bargaining. This on the ground economic reformism by the bosses was echoed by the growing labor bureaucracy which wanted to confine benefits to its members rather than providing them through legislation.

This intransigence of the ruling class to political reform bifurcated the labor movement. The Industrial Workers of the World (IWW) also rejected legislative reform but from a revolutionary direction. It only wanted to win gains through the class struggle on the way to revolution. This led finally to a division between the IWW and the growing Socialist Party though at its founding political socialists were part of it.

Why the U.S. ruling class was more repressive and more opposed to regulation or social legislation than other ruling classes is an open question. In Europe, the capitalist class had become the ruling class by this period. However, it still had to compete for allegiance with the remnants of the formerly feudal class and its noblesse oblige. In the U.S. after the Civil War the old slaveocracy had been replaced by capitalist land owners so there was no separate class to compete with the capitalists. Further, the U.S. was a late developing capitalist nation in a competitive world economy. The ruling class was determined to expand capital at any cost, including even nominal welfare of the working class. Whatever the cause of the ruling class’s resolutely reactionary politics, its record is clear.

In spite of underplaying some important aspects Moody’s book is a crucial addition to our understanding of working class history.