Protests Against Biden’s Immigration Policy and Treatment of Haitians 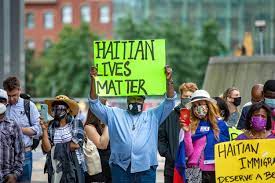 Photographs and videos of U.S. Border Patrol agents using their horses and what appeared to be whips against would-be Haitian immigrants at the U.S.-Mexico border led last week to outrage, widespread condemnation, and to protests against President Joseph Biden, including from leaders of his own Democratic Party who accuse the administration of inhumane and racist policies. There had already been protests against Biden keeping in place a Trump era Rule 42 that used COVID as an excuse for denying entry to asylum seekers, but the scenes of black migrants held in chaotic, dangerous, and filthy conditions in Del Rio, Texas and then of Border Patrol agents riding their horses into the migrants, their reins looking like whips, sparked indignation. The whip is an America symbol of the slavery in which Black Americans were once held.

The Haitian migrant situation is extraordinary. Haiti, already the poorest nation in the Western Hemisphere has recently suffered the assassination of its president, a powerful tropical storm that left a wake of destruction, and a 7.2-magnitude earthquake that added to the disaster. Thousands have sought refuge in other countries. Yet the United States, in violation of its own laws and of international agreements on asylum, used former President Donald Trump’s Rule 42 to exclude the Haitians because of the COVID crisis in the United States and then deported them back to Haiti where COVID is rampant and the vaccination rate low.

Then last week suddenly 15,000 Haitians appeared at the sister cities of Ciudad Acuña, Coahuila, Mexico and Del Rio, Texas. Living in squalid conditions under a highway bridge in Mexico, the Haitians attempted to cross into the United States where Border Patrol agents stopped them.

The Biden administration’s subsequent handling of the Haitians in Del Rio seems arbitrary. Thousands were put on planes and flown back to Haiti, thousands were admitted into the United States temporarily, and others remain in Mexico.

Biden ran for president as the Black community’s candidate and as a proponent of immigration reform. The fact that the Haitians are Black migrants, not Latinos, has shifted the national debate and divided Biden’s party.

Senate Majority leader Charles Schumer stated, “I urge President Biden and Secretary Mayorkas to immediately put a stop to these expulsions and to end this Title 42 policy at our southern border. We cannot continue these hateful and xenophobic Trump policies that disregard our refugee laws. We must allow asylum seekers to present their claims at our ports of entry and be afforded due process.” A U.S. Federal Court in fact declared Rule 42 illegal at about the same time.

The Congressional Black Caucus met with White House officials to express their concern. Representative Barbara Lee, a California Democrat, called on the administration to stop deportation flights to Haiti.

Derrick Johnson, president of the National Association for the Advancement Colored People, the historic black organization, issued a statement reading, “This cruelty is utterly sickening. The events that took place today are all too familiar to those that are aware of America’s ugly history. The actions we witnessed today were inhumane under the last administration, and that sentiment remains. No person fleeing poverty and hunger should be treated in this egregious manner. For far too long, the Haitian community has endured mistreatment at the hands of our nation.”

In addition to the politicians and human rights organizations, hundred of Americans protested the treatment of the Haitians in demonstrations in San Francisco, Houston, Boston, Miami and other cities.

Democratic Party proposals for immigration reform are stalled in Congress and not likely to pass. The Democratic Socialists of America and others in the far left call for abolishing immigration police and opening the border, though such demands have little support.

Posted September 29, 2021 Uncategorized by Dan La Botz
About Author
DAN LA BOTZ is a Brooklyn-based teacher, writer and activist. He is a co-editor of New Politics.