Presidential Election Amidst Conflagration and Coronavirus 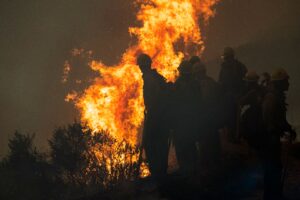 Bob Woodward, the famous journalist, has just published a book titled Rage based on 12 hours of interviews with Trump, that has confirmed what many of us believed. Trump told Woodward that from the beginning he knew that the virus was highly contagious and more deadly than the flu and admits that he didn’t tell the American people the truth because “he didn’t want to create a panic.”

H. Holden Thorp, editor of the journal Science, said, “As he was playing down the virus to the public, Trump was not confused or inadequately briefed: he flat-out lied, repeatedly, about science to the American people. These lies demoralized the scientific community and cost countless lives in the United States.” Trump continues to claim that the virus is under control, though about 1,200 people are dying each day. The United States now has close to seven million confirmed cases and 200,000 coronavirus deaths.

Trump has also been hurt by reports that he called American soldiers who fought in various wars “suckers” and “losers.” He also called America’s top military officers “war profiteers” who got the country into unnecessary wars. Several former military chiefs blasted Trump for both remarks. Remarkably polls show that Trump core supporters—about 40 percent of voters—have not been moved by either his handling of the coronavirus or his remarks about the military. Independent voters, however, may be turning from Trump.

Fires in California, Oregon, and Washington, the result of high temperatures and powerful winds caused by climate change, have over the last three weeks claimed more than two million hectares, an area nearly equal to the island of Sicily. Q-Anon, the conspiratorial group that claims that “pedophiles control the deep state” in America and which supports Trump, blamed the fires on arsonists from Black Lives Matter and Antifa. That claim, spread rapidly on social media, leading some people to arm themselves and interfering with the emergency response, so that fire and police departments and the FBI had to refute the malicious rumors. President Trump, who denies climate change and has forbidden government agencies from discussing it, has ignored the fires, though he is now planning a trip to California where Democratic Party Governor Gavin Newsome has attributed the fires to climate change.

The Republicans have done everything to make it hard for Democrats to win the election, passing state laws and creating regulations that for one or another technicality remove Black, poor, and student voters from the rolls. Trump and Postmaster General Louis DeJoy have also seen to the removal of postal machinery and street corner mailboxes, and have reduced the hours of postal workers, all to impede mail-in voting. On Election Day, as happened in the past, Republicans will use robocalls, social media, and leaflets to spread misinformation to confuse voters.

There are other candidates. Trump and the Republicans are supporting the presidential campaign of Black rap singer Kanye West, hoping he will take Black votes away from Biden. Howie Hawkins, the Green Party candidate and a socialist, remains marginal in an election where votes for him might help reelect Trump. The Democratic Socialists of America and the rest of the left oppose Trump, but remain divided on the election between those, the majority, who will vote for Biden, some who will vote for Hawkins, and those who reject voting.

Posted September 14, 2020 Electoral Politics, Left Politics by Dan La Botz
About Author
DAN LA BOTZ is a Brooklyn-based teacher, writer and activist. He is a co-editor of New Politics.