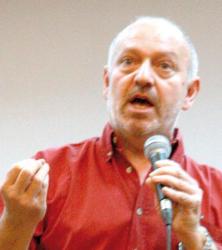 More than 130 of the leaders of the world’s nations are about to sign the Paris agreement on climate change. New Politics had the opportunity to interview Daniel Tanuro, the founder of Climate and Social Justice, a Belgian based environmental organization and author of Green Capitalism: Why it Can't Work. Tanuro’s writings on ecosocialism are well known to those in the European ecosocialist movements. New Politics co-editor Dan La Botz had an opportunity to interview Tanuro about the Paris agreement at the Swiss Solidarity Spring University.

New Politics: Do the Paris agreements begin to solve the environmental crisis?

Tanuro: No. The Paris agreement won’t solve the climate crisis. The nations signing the agreement have adopted the goal of a global temperature increase of 1.5 to 2 degrees Celsius. But this is a phony claim. The important things in this agreement are the INDCs, that is the “intended nationally determined contributions,” or each nation’s contribution to reducing the global temperature. If one takes the INDCs and globalizes them and make projections on that basis, the likely increase in warming will between 2.7 and 3.7 degrees Celsius by the end of the century, or double what the agreement says.

There are among the world’s leaders, some smart people, who understand the seriousness of global warming and the threat it poses to the capitalist system. For example, the former U.S. Vice-President Al Gore; Mark Carney, the governor of the Bank of England; and Nicholas Stern, a professor at the London School of Economic. They want to fight within the bourgeoisie over climate change. The Paris agreement is a victory for this current. Their problem will be to find a way to make up the difference between the goal of 1.5 degrees of warming and the INDCs 2.7 degrees, which is the overall objective of the agreement. If they’re serious in their strategy against climate change, they will have to find ways to make up that difference, at least partially.

Tanuro: It’s extremely difficult because given the climate budget remaining for this century, in order to have a 66% chance of achieving the 2 degree goal, the world must emit less than 1,000 gigatons (GT) of carbon between 2011 and the end of the century. The carbon budget for 1.5 degrees is only 400 GTs. The annual emissions at present are about 40 GTs, so the remaining budget today for 2°C is about 800 GTs and for 1.5°C only about 200 GTs.

To stay within those budgets is totally incompatible with capitalism because it is incompatible with growth, and capitalism without growth is a contradiction in terms. There's no doubt that the carbon budget will be exceeded, so the only way to try to fill the gap, even partially, between 1.5C and 3.7°C will be the use of the so-called “negative emissions technologies.” That's why I say the agreement is not only insufficient, but it entails new threats, threats from geo-engineering on the one hand and threat of a massive appropriation of the ecosystems to capture carbons on the other.

NP: What do you mean by geo-engineering?

Tanuro: The British Royal Society’s definition is this: Geoengineering is human intervention to change the climate system. The massive use of fossil fuels from the beginning of the industrial revolution until today was a kind of geo-engineering, so those who want to stop global warming will have to find something similar to reverse our current direction.

NP: They need a technological solution then. Is there one?

Tanuro: Yes, there are various things that can be done. The first thing would be planting trees, for example. Some research suggests that one could capture10 GTs of carbon yearly simply through the planting trees on a massive scale.

But, there are two social problems with this. One is the appropriation of ecosystems and the other is competition with other land use, such as the production of food, of course. The appropriation of ecosystems would mean a new era of enclosures, something like Marx’s description of “primitive accumulation of capital.” For example, in Africa, where this is already happening, businesses investing in the carbon market expropriate the land from farmers and then turn those former farmers into workers to plant trees.

We should be very critical of this approach because of its social implications. But there are also environmental issues. They aren’t planting forests. They’re engaging in monoculture, that is, planting just one specie such as eucalyptus tress. Or they may plant genetically modified fast-growing trees. I think we should oppose all GMOs, including trees, because new problems can be introduced. If one, for example, one introduces GMO trees, they might create new allergies that would affect humans

Tanuro: The major technology is called BECCS, that is, bioenergy with carbon capture and sequestration. The idea is to combine the use of biomass as an energy source with the technology of geological capture and sequestration. This is very hypothetical. It has been done in Norway on a small scale and there are a few pilots in Europe financed by the European Union, but nobody knows if the gas will stay in the ground or how long it will stay in the ground.

If there is an earthquake the gas could escape. Or perhaps the storage of gas might cause earthquakes. This has already occurred in the North Sea where Norway is experimenting and it also happened in British Columbia, where there was a 4.5 Richter scale earthquake last summer.

BECCS is really the priority for these people and this would be one way that they might try to make up the gap between the goal and the global projection on the basis of the INDCs. According to some researchers, the technical potential of the BECCS could be greater than the 2°C carbon budget.

There are other technologies of course. One is ocean liming. If you disperse lime in the ocean, the CO2 in the ocean will react with this lime and Calcium carbonate will precipitate to the bottom of the ocean. This would create a virtuous circle, because as the captured CO2 fell to the bottom, the water could also absorb more atmospheric CO2. This could be one of the most massive responses in order to lower the concentration of CO2 in the atmosphere and in the ocean (thus lowering the acidification), but nobody knows what might be the effect on the marine ecosystems—nobody knows that. Technically it would be quite tricky to organize. If you want to distribute enough lime to have an impact, you would also have to build as many new ships as currently exist on earth.

NP: Are there other technologies?

Tanuro: One technique is quite similar to the ocean liming, partly the same reaction between CO2 and lime, not at sea, but on the earth. After the reactions take place, the CO2 could be released to be stored in the ground. This would require an enormous economic investment in order to build the thousands of huge of devices that would be necessary.

The discussion of degrowth, therefore, is not absurd in my view. However, degrowth is not a project for a different kind of society. It is not a social alternative.

This is a problem for these smart people that I’ve mentioned, because they know from the economist Joseph Schumpeter that you can’t have capitalism without growth. So they will want to use geo-engineering to deal with the issues.

All of this can be seen in Nicholas Stern’s “Report” on climate change made for the English government. We need to stabilize at 450 parts per million CO2 equivalent, but that would cost 3 percent of the world’s GDP. To stabilize the climate at 550 ppm would take 1 percent of the world’s GDP. The economic costs thus lead Stern to recommend that we not do too much too fast. For him it’s all too expensive and too disruptive. But 550ppm most probably means a 3 to 4°C warming by the end of the century.

NP: Well, what should those of us concerned about these issues do then?

Tanuro: We need to block investments in fossil fuels. We need to throw sand in the productivist machine as happened with the XL Pipeline, and with the struggle against the new airport in Notre Dame des Landes in France, and as is happening with the struggle against the exploitation of brown coal and coal in general in Germany. The German government decided to phase out the nuclear plant but they didn’t change the nuclear power with renewable but by coal. So there’s a very important movement to block the mines. We need to throw more sand in the machine and stop these fossil fuel investments.

At the same time, we have to put forward a program for the transition towards an ecosocialist society. Key demands are the expropriation of the energy and finance sectors – which are deeply interconnected – the development of the public sector and the reduction of hours in the workday. This is the only way to simultaneously solve the ecological crisis and the social crisis, particularly the problem of unemployment.