Our Postwork Future: A Prospect to Win or to Lose? 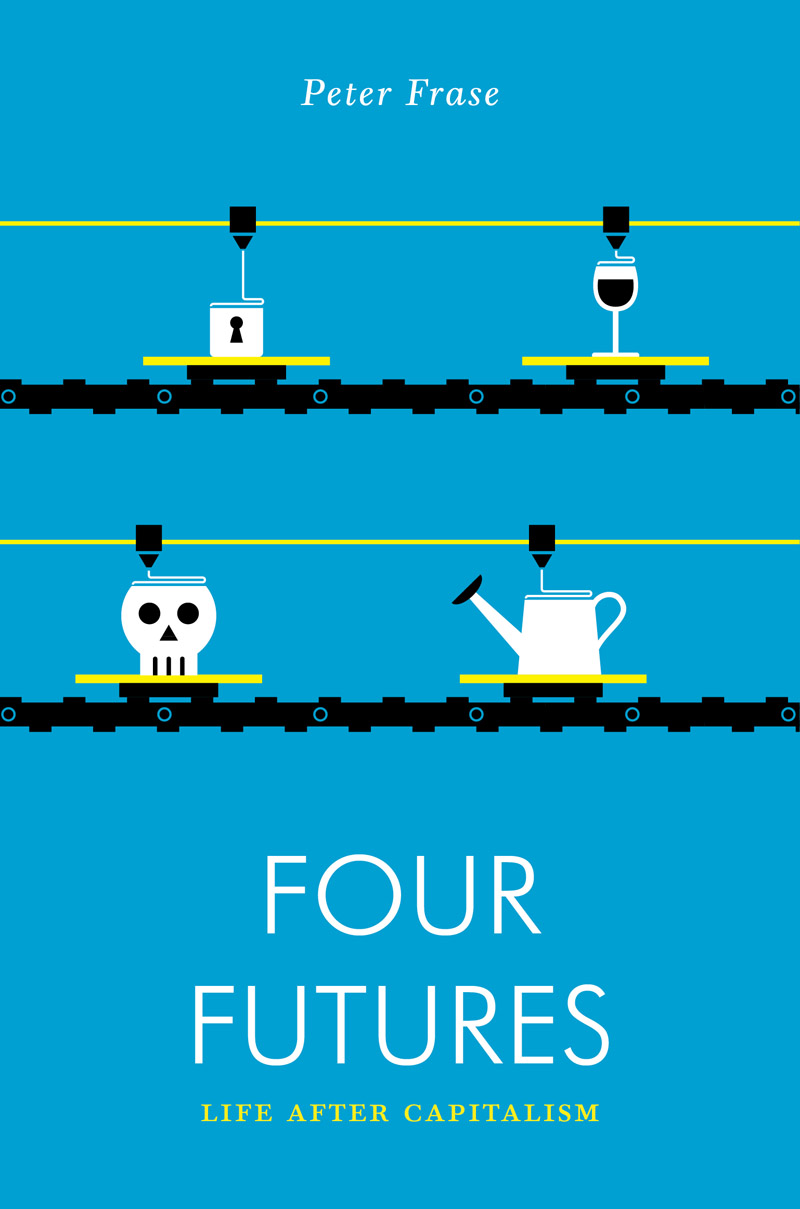 It borders on a disservice to characterize Four Futures: Life After Capitalism as a primer on contemporary political philosophy, since Peter Frase, the author, explodes any expectation of pedantry in his prose, or more importantly, in his approach to political theory, which he calls “social science fiction.”

Primer or not, Frase has written a critical introduction to our times every incoming freshman should read. Frasedistinguishes his approach from the numerous recent accounts of the rise of automation and the disappearance of jobs by situating in his Four Futures class power as central to his speculations. And a ruling elite, bent on self-preservation in a world spirally into a climate change catastrophe, appears in each future as an obstacle to be overcome, or as victor imposing disastrous prospects upon society.

Frase has packed into his small book a bonanza of sci-fi references to illustrate his four futuristic themes. He intends, he states in the Introduction, to “reclaim the long left-wing tradition of mixing imaginative speculation with political economy.” Despite his disclaimer – “my approach is deliberately hyperbolic” – he nonetheless illuminates “fundamental principles” with precision (except for one future, more on that later) and with literary aplomb.

The four futures in the title are divided into two utopias where egalitarianism is realized and two dystopias where coercion rules. These are further characterized by economic preconditions of abundance or scarcity. For example, in the first future to be explored – the communist one – Frase’s favorite, and mine, here abundance prevails, capitalism no longer hinders the advance of science and technology so that, as in Star Trek, the replicator (the future economy) materializes desires. Unlike Star Trek’s hierarchy, radical egalitarianism thrives in the form of “many hierarchies, no one of which is superior to any other.” In the communist future, wage slavery is abolished; everybody receives an income as a human right and work and leisure are transcended by an activity people seek for self-fulfillment and the pleasure of freely being with others.

With the second future, the socialist one, environmental resources are limited by climate change and scarcity infuses society with measures of constraint that result in, shall we say, a more modest egalitarianism. In the next future, Frase retains scarcity, but deletes equality and replaces it with hierarchy to arrive at the future of exterminism – or communism for the few, insured by a massive military superstructure, and misery for the masses preserved by that same superstructure. Hunger Games comes to mind.

The fourth future is rentism. Political economists usually call this rentier capitalism, though historically those who lived off funds by providing access to limited resources, like land, were called rentiers and were differentiated from capitalists who lived off the backs of laborers. Frase tweaks rentierism in ways that may justify his new term since, for him, those collecting rents in this future would do so by controlling the Star Trek replicator and implementing an artificial scarcity based on licensing agreements. Renting ideas is not the same as renting land. In other words, the replicator owners would sequester abundance for themselves by the use of copyrights, patents or other forms of government connivance. Ultimately – we should be clear about this – by the coercive exercise of economic power enforced by violence.

In his discussion of rentism, Frase quotes the accepted estimate that it comprises one-third of the US GDP: a figure that relies on traditional sources of rent like intellectual property rights (music, film, literature) and finance (interest is a form of rent). Though the size of this figure may shock many people, it nevertheless is a gross underestimation of the scope of rentism today, where the rapid, global expansion of platform capitalism rivals finance as the prime source of rent. From platforms like AirBnB, Uber, the giants in this sector, to Mechanical Turk and Task Rabbit that scoop up the exiles of the “sharing economy” too poor to have space to rent or a late-model vehicle to drive, these capitalist ventures are mischaracterized as innovations when really they function as modern day enclosures of the commons that provide astronomical rental earnings for their owners. Counting these “disruptors” as rental sources, as Guy Standing does in his new book The Corruption of Capitalism, seriously magnifies this sector in GDP statistics and defines the US as a rentier economy.

Frase does qualify that the four futures are not merely fanciful speculations. Each one can be seen as an extrapolation of contemporary currents. This is where politics enters his discussion. The point here is that rentism is our present reality, not a future. For example, Frasespeculation about the inherent instability of rentism – due to a lack of demand – occupies today’s headlines. When economists issue warning about sluggish growth or “secular stagnation,” what they mean is that consumerism is withering like vegetation in a drought.

And Frase’ view of employment in his rentism future seems less dystopian than the reality we face today. He imagines, for instance, a tiny creative class designing the code for the replicator, an army of lawyers fighting intellectual property rights cases and legions of marketing and advertising personnel. Finally, since these professions will hardly amount to a sizable portion of the population, Frase includes cops to keep the jobless in line. We have here, he concludes, a society ripe for revolt. Am I wrong? Do I recognize today’s world here?

Yes, recognizable, but missing the grimmer aspects of our reality, especially regarding employment. What about all the meaningless jobs that our economy creates? As just one example among many, enter any doctor’s office and half the staff (or more!) will be processing insurance claims. And what are we to make of the multiplicity of so-called service jobs – from closet organizers to personal trainers? For those who don’t have a nonsense job, we have a “no future” tragedy that leads to the deathly expansion of drug addiction – the misery of everyday life materialized as pills and or injections. And speaking of death, the rising mortality rate of white middle-aged men alone attests to a far grimmer reality than Frase’ rentist future.

Frase describes the utopian, and subversive, communist future in a chapter twice as long as the other three futures. By giving equal weight to the remaining three futures, he misses an opportunity to emphasize in his postwork narrative “politics, specifically class struggle.” Each future raises political choices, because each future resonates with some aspects in our society, as he says. Rentism, however, more than resonates – it dominates and defines our economy.

Posted November 5, 2016 Political Economy, Socialism by Jason Schulman
About Author
Bernard Marszalek, the editor of a collection of essays and speculative fiction by Paul Lafargue, The Right to be Lazy (AK Press), currently blogs at www.ztangi.org.