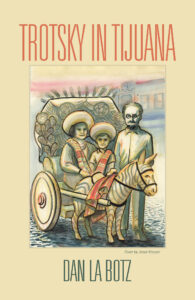 Eighty years ago, on August 20, 1940, Ramón Mercader, an agent of the Soviet Union’s secret police attacked Leon Trotsky, a leader of the Russian Revolution of October 1917, in his home in exile in Coyoacán, a suburb of Mexico City. Trotsky died the following day.

Why was Trotsky killed? Following the death of Vladimir Lenin, leader of the Bolshevik Party and head of the government of the Soviet Union, there was a succession battle between several of the party’s leaders: Lev Kamenev, Georgi Zinoviev, Nikolai Bukharin, Joseph Stalin, and Leon Trotsky. Stalin divided his opponents, won the upper hand, and had Trotsky expelled from the Communist Party, then driven him from the Soviet Union, first to Turkey, then France, Norway, and finally to Mexico, where Stalin had him killed. Trotsky, then sixty years old—he was known as the Old Man—was martyred for his cause, the struggle against Stalin and the construction of a Fourth International as an alternative to the Socialist and Communist internationals.

While already famous for his role as a leader of the October Revolution, he was also famous for a series of book—The New Course, The History of the Russian Revolution, The Revolution Betrayed, and his autobiography My Life—that bolstered his reputation as a thinker and writer. In addition, his articles on the rise of Nazism and the failure of the German Socialists and Communists to unite to stop Adolf Hitler from coming to power had proven him the most astute political analyst of his time. During the last several years of his life he dedicated himself to constructing the Fourth International. And then he was murdered and no doubt, beyond his political and intellectual achievements, his martyrdom contributed to the aura that surrounded him and to the fervor of his followers.

Five years ago, on the seventy-fifty anniversary of his death, I discussed and criticized Trotsky and his legacy in this journal. Now in my new novel Trotsky in Tijuana, I ask, what if his life had been saved on that day in August of 1940? I imagine that both to protect Trotsky and get him out of the way, President Lázaro Cárdenas had sent the Old Man to live in Tijuana, Mexico, then a small town on the U.S.-Mexico border that was virtually inaccessible from Mexico. There Trotsky, Natalia and their grandson Sieva together with the secretaries and bodyguards once again create a home and an office. After finishing my novel, I came across this interesting question:

What might have happened had Trotsky lived through the Second World War, Hitler’s invasion of Russia, and observed the triumph of the Stalinist state, its solidification and expansion? We can only guess, since at one point he stated that if the proletariat did not take power in the war, it would force the question: Is it incapable of doing so, or was the Socialist perspective an unrealizable dream. – Albert Glotzer – Trotsky: Memoir & Critique, 1989.

In my novel, I ask more particular questions both political and personal: What would have become of Trotsky if he had survived and lived in Tijuana for the next thirteen years? How would he have analyzed the Second World War and how would he have explained the Soviet Union’s victory over Hitler’s Germany? What would he have thought of the expansion of the Communist system to Eastern Europe? Seeing the stress he was under, might his wife Natalia have sought a Freudian, Reichian psychoanalyst to work with him? Might Trotsky have had another love affair like his earlier affair with the artist Frida Kahlo? What would have happened to his project, the creation of a Fourth International and its fractious national sections and strong-willed leaders? How would he deal with aging?

Trotsky had predicted that World War II would, like the First World War, be followed by an era of economic depression and revolution in Europe and the United States. What would he have said when his predictions were unfulfilled? Trotsky foresaw in the aftermath of the war the overthrow of the Soviet bureaucracy that Stalin headed, either by workers’ socialist revolution or capitalist restoration, yet neither of those happened. How would he have reacted to the Soviet Union’s expansion in Eastern Europe, becoming a major world empire while the Communist model of society spread to China, Vietnam, and Korea? How would Trotsky have dealt with his erstwhile friend and sometime critic Victor Serge in the post-war period? What would he have thought of Jean-Paul Sartre and his new anti-capitalist but also anti-Communist organization? Might Senator Joseph McCarthy have called Trotsky to testify before his committee, as Congressman Martin Dies planned to do in 1939?

Would Stalin eventually have assassinated him in Tijuana? And what if Trotsky’s favorite secretary, Jan van Heijenoort, had undertaken to assassinate Stalin? Could he have succeeded? And how was it that both Trotsky and Stalin died on the same day in March of 1953? Were they murdered?

On the eightieth anniversary of his death I ask in my novel: Who was Leon Trotsky, the man and the political leader?

Posted August 20, 2020 Belarus, Left Politics, Russia, Uncategorized by Dan La Botz
About Author
DAN LA BOTZ is a Brooklyn-based teacher, writer and activist. He is a co-editor of New Politics.

Top
We publish because of your support

We publish because we know readers like you come to New Politics for pointed debate and smart, readable, informed analysis from an independent left perspective you don’t find elsewhere. So now’s the time to dig as deep as you can, make  donations and buy subscriptions that support our print issue (twice a year) and  content unique to our site almost every day.   Renew! Subscribe!  Close this annoying box, contribute to keep us going, then read that new post or article from our archives.