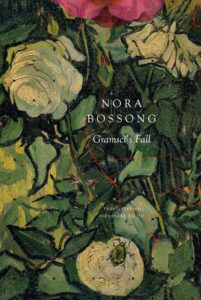 “My biggest weakness was not finding the mettle to remain alone… without any connections, attachments, relationships at all. That is the source of all the misery.” —Nora Bossong, Gramsci’s Fall.

In Nora Bossong’s latest novel, Gramsci’s Fall, we meet forty-six-year-old Anton Stöver whose marriage is falling apart with extra-marital affairs coming to a close and a career in a German university at a dead end. When he is offered an opportunity to research on one of Antonio Gramsci’s missing notebooks, he fights with his wife and readily agrees to join his friend in Rome in the hope to finally make a breakthrough with his childhood obsession. As he delves into Gramsci’s past, we find our narrator falling in love with a young woman, visiting his own past; a childhood he wishes to abandon, a marriage that was a bad decision, a career that never took off and then a child to fulfil his middle-class ideal life.

In alternating chapters, the book intrudes into their personal lives and provides us a picture of the troubled marriages and struggling lives Anton Stöver and Antonio Gramsci lead. On one hand, we find the professor drifting away willingly from his family and on the other we see Gramsci being torn apart reluctantly from his wife and children. They are fighting a battle; a battle to protect what’s closest and intimate to them. In this drama of struggle and conflict, the author guides us into their lives, their thirst for social change, the pursuit of knowledge, and their only wish; to be with the one they love.

I read Gramsci’s theories for a particular course in a semester. I can recall my fascination with his thought and the length it reached. A brief summary on his life made me inquisitive. I was motivated to know the kind of person he was, the life he led. It was this curiosity that pushed me in scooping this novel off a shelf in a bookstore. Needless to say, this book was what I had expected when I spotted it on the bookshelf. It was not a mere biography of Gramsci recounting his successes and losses through a character of the novel as is often the case when novelists try to explore the life of a thinker or a writer who is dead. It was a novel that had Antonio Gramsci, the Italian political thinker, as a character living his life when Mussolini and his fascist dictatorship was its zenith in Italy. In his 1984-acclaimed novel Flaubert’s Parrot, Julian Barnes tried to invoke the life of French novelist Gustave Flaubert’s life through his protagonist. However, Barnes failed to bring Flaubert alive in his work for the reader. Flaubert and his life remained an obsession of the protagonist written down in pages with no access for the readers but through the research materials on his life. It is here, I felt, Bossong stood apart with her novel. She brought Gramsci and his Italy to life before the reader and made us connect to him even though she may have used her agency as a writer to stitch independent facts from his life through tiny threads of her imagination.

In the face of it, the novel may appear a writing on the socio-political matters concerning with social thinkers. Whether it is the politics of socialism that Gramsci wishes to see conquer in Italy, or Anton Stöver’s ambitions to give the world another of Gramsci’s political insight; the stories flow along the lines of wider political struggles marring Russia and Italy back in 1920s and the location of the professor in Rome in the present times where only the memories, murals and tombs of its socialists are alive. Gramsci is at the cusp of his rising political presence traveling from Moscow to Italy in search for what socialism truly is in his eyes. He is aware of Marx, Engles and Lenin, at the same time he is also under the strong influence of Sorel, and the Anarchists such as Bakunin, Kroptkin, Proudhon. His conversations with his friend Piero Straffa, or Eugenia Schucht on communism, or socialism, in practice at that time, helps Gramsci make a breakthrough within the Marxist thoughts extracting it from its economic determinism. In doing so, Gramsci gave Marxism a newer meaning and a cultural way to understand fascism which Bossong tried to cultivate brilliantly throughout the story. Herein, we find the socio-political nature of the novel give way to something else, something more intimate, closer to ordinary human experience and that was the politics of love, which changed Gramsci’s life too.

The novelist, through a careful exploration of Gramsci and Anton Stöver’s personal life shows us the essence of love, the violence, its possession, the ferocity, the care and the protection attached to it. The book, despite all its socio-political nature, is a book on love and a life spent in loving. On the one hand, we find Anton Stöver be disloyal, sleep with as many women as he could back in Göttingen and fall for a young woman in Rome with no sense of fidelity toward his wife. We find him often justifying his infidelity by suggesting monogamy as the tool of capitalism that gives birth to the idea of private property and hence being non-monogamous entailing being true to his marxist principles. On the other hand, there is Gramsci, the man who was never attached to anyone or believed in building connections, drive himself crazy in love with his friend’s sister Giulia Schucht. The childhood that disfigured his body is needs, seeks companionship of Giulia and Giulia only. Even in his loneliest time, he only reminds himself of his commitment to her. His resolve to be monogamous is a sharp contrast to Stöver’s choice and raises the question whether monogamy really is a political exercise or simply a choice that’s outside political ideologies. At the end of the book, Bossong presents an extract from the Prison Notebooks wherein, Gramsci writes how loving one person precedes social love. Consequently, he presents his dilemma with what is better for a socialist society; the social love or the love for one single person. His answer to the question is beautifully and poignantly captured through the story of his life Nora Bossong has tried to tell us in her novel and the title that echoed in its pages. It was after a fall; a coming down and dismantling; both of Gramsci and Anton Stöver.

Even though the principle characters of the novel were two men, not for a second, I felt the presence of women wither into the background. The female characters in the novel are women who have facets that give the novel its strength. Whether it is Hedda, Anton Stöver’s grieving, disheartened wife, or Gramsci’s lonely, sad Giulia; they both have stories that bring out the happiness and exhaustion of marriage and love from a woman’s side. Alongside, we find the dominating presence of Ilsa, Anton Stöver’s mother whose strength and voice scares Anton, makes him hate her but also as someone who is responsible for his communist scholarship. Back to Gramsci’s life, we find him mostly surrounded by women; whether it is Eugenia, who stood as a symbol of a hope of a socialist society, or Tania, who gave up everything to be at his side when he was in pain. The female charters of Bossong aren’t just background props. They are women with stories strewn over their hands and eyes. They are living books that are opened to be read and understood as much as the male protagonists.

The author was unknown to me but that did not deter me in laying my faith on this book. I read the first chapter and realised this is going to be something I would love. There is a smoothness to her prose that flows from one page to another in an assembled manner. From one period to another, snippets from childhood to what’s unfolding at present, from politics in state and family to struggles in love; it all fits together and I could discern a pattern the author lent to her prose. Undeniably, the credit also goes to Alexander Booth, who perfectly translated the book from German to make it available to a worldwide audience. I sincerely hope Bossong’s other works are translated in English as well, and soon. I could feel the characters in book, their joys and apathies. I could see them come out from the pages whenever I opened the book and witness them getting on with their lives. I could hear her characters speak to me about the promises they kept and the many they couldn’t. She brought history to life through her novel.

Gramsci’s Fall was published in German in 2015. It was first published in English by Seagull Books on 4th April, 2020.

Posted April 9, 2021 Intellectual History, Literature by Phil Gasper
About Author
Rahul Singh is a postgraduate student in Sociology. He loves reading literary fiction and  makes an effort to understand it through his sociological training. He writes  short reviews of all the books he reads on his Instagram Handle. His book review of Cleanness by Garth Greenwell was recently published in LiveWire.