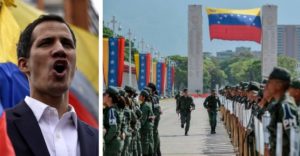 The U.S.-sponsored coup in Venezuela appears to have fizzled on the first day. But the country remains on a knife-edge. A failure of this coup would leave the Trump administration facing the prospect of its own “Bay of Pigs”-type debacle – when John F. Kennedy in 1961 authorized a CIA-organized invasion of Cuba, which was rapidly crushed, a generational humiliation for U.S. imperialism in Latin America.

Venezuela in 2019 is far different from Cuba in 1961, and the world is a different place too. But the Trump gang’s proclamation of “all options on the table” clearly signals, if the regime-change coup sputters, to organize a civil war in Venezuela, a foreign mercenary invasion, a blockade or even direct U.S. military intervention.

This is a return to the longstanding U.S. imperial doctrine that Latin America is “our back yard” to be dominated and exploited at will. In fact, Trump’s national security advisor John Bolton has openly stated that it doesn’t stop with Venezuela — Cuba and Nicaragua are also targets of the drive to enforce U.S. dictates in this hemisphere.  A movement is urgently needed opposing this vicious intervention and U.S. threats to destabilize and destroy governments that don’t obey Washington’s orders.

At this exceptionally dangerous moment, the fact that there’s essentially no opposition from the Democratic Party leadership is both shameful, and utterly predictable. Have you seen any Democratic Congressional leader utter a word opposing Trump’s coup attempt in Venezuela? (A few Representatives including Ilhan Omar, Rashida Tlaib and Alexandria Ocasio-Cortez have spoken out against it, and on May 2 Bernie Sanders tweeted: “The Trump administration is threatening a disastrous military intervention in Venezuela. Under our Constitution, only Congress can authorize the use of force. We must make sure the United States does not get involved in yet another war and destabilize another region.”)

Nor has there been Democratic opposition to Trump’s months of preparation for the coup, including turning over millions of dollars of Venezuelan oil revenues to “interim president” Juan Guaido,  sanctions to cut the country’s access to capital markets, and the blatant political manipulation of purported “humanitarian aid.”

U.S. imperialism in Latin America demonstrates “bipartisanship” in practice. The Democratic administration of president Obama and Secretary of State Hillary Clinton welcomed a coup in Honduras in 2009, which returned that Central American nation to the rule of multinational corporations, death squads and drug cartels. When the Honduran people voted that regime out of office in 2017, the election was blatantly stolen – with the approval of the Trump administration, of course. That’s the main reason why tens of thousands of Hondurans, including whole families, have fled seeking asylum and are being caged at the southern U.S. border.

From the ostensible “opposition” press – CNN, MSNBC, The New York Times – consumed with the 24/7 spectacle of post-Mueller subpoenas, hearings and impeachment chatter – there’s a virtual consensus that “restoring democracy in Venezuela” means putting Guaido in the presidential palace. There’s no consideration of what engineering a rightwing restoration in Venezuela would actually mean for the future of democratic rights, indigenous peoples and working class movements in the region – or what an emboldened Trump gang might undertake next.

The Coup and the Crisis

Juan Guiado proclaimed himself “interim President of Venezuela” when Mike Pence signaled that it was time to do so. Undoubtedly, his April 30 proclamation of the “final push” to overthrow the Nicolas Maduro government was prompted by the U.S. government’s assessment that the time was ripe for the Venezuela military to crack. This may well have been an enormous imperial miscalculation, or as George W. Bush might have put it, “misunderestimation” of the relation of forces.

For anyone with progressive or democratic values, it is essential that this coup fail, and fail decisively.

This doesn’t mean blinding ourselves to the depth of the social, economic and political crisis in Venezuela today. In fact, neither side of this confrontation is politically strong. As some on the Venezuelan left have stated, “the people no longer want Maduro, and no one elected Guaido.”  Popular support for the existing government is thin, Guaido’s pretense of legitimacy is largely promoted by external governments, and in truth much of the Venezuelan population are exhausted and consumed with the daily struggle for survival. The likely prospect is a protracted, grinding struggle as the U.S. government seeks to prey on people’s suffering and desperation for any solution.

Venezuela’s crisis is the product of multiple well-documented factors. These include the failure of the “Bolivarian revolution” to develop well-rooted institutions of grassroots popular power and workers’ control of production; the consequent growth of bureaucracy and corruption in the regime; the collapse of oil prices; and brutal U.S. sanctions that (as estimated by expert economist Jeffrey Sachs) have contributed to some 40,000 civilian deaths in Venezuela.

As desperate as conditions have become for much of the Venezuelan population, a successful coup and U.S.-sponsored rightwing regime would make everything much worse – for Venezuela and for all of Latin America.  As the governments of Mexico and Uruguay have been seeking to bring about a peaceful political solution, the Trump-Pompeo-Bolton gang is determined to destroy anything other than a U.S.-imposed result to show who’s the boss of the Americas.

Down with the U.S.-Guaido coup – only Venezuelans can determine their future!

Posted May 4, 2019 U.S. Foreign Policy, United States, Venezuela by Jason Schulman
About Author
Solidarity was founded in 1986 by revolutionary socialists who stand for “socialism from below,” the self-organization of the working class and oppressed peoples. We are feminist, anti-racist, and democratic. Within our group, we are trying to foster cultural diversity, flexible practice, and straight-forward socialist politics, neither sectarian nor reformist. We advocate a new, creative politics with an attitude of openness and collaboration.