Mike Alewitz, the internationally famous muralist, is fighting for the installation his mural “The City at the Crossroads of History” at the Museum of the City of New York. Commissioned by the Puffin Foundation, the museum has refused to install the piece because of objections to its content. Alewitz calls this a case of censorship, while the museum argues it is a question of “curatorial standards.” There is a petition campaign in support of the installation of the mural. (Find at the foot of this article links to a slideshow of the mural, an interview with Alewitz, and the petition site.)

Alewitz is a brilliant artist whose murals grace the walls of community centers, labor unions, and public buildings in the United States and other countries. The one I know best is his “Sindicalismo sin Fronteras” [Labor Unionism without Borders] in the assembly hall of the Authentic Labor Front (FAT) federation in Mexico City. As one looks toward the stage, the face of the Mexican revolutionary Emiliano Zapata looms behind a landscape of agriculture and industry, in front of him a peasant, a worker, and teacher, and on side Albert Parsons, the Haymarket martyr, and on the other Lucy Parsons, his widow and long time left labor activist. Like all of Alewtiz’s art, the image is dramatic, the composition masterly, the colors stunning, and at the center is the struggle of working people for a better life.

The Story of the New York Mural

In January of 2009, Puffin Foundation President Perry Rosenstein wrote to Alewitz with a proposal to create a major new work for a gallery at the Museum of the City of New York that would be endowed by the Puffin Foundation. “The Puffin Foundation Ltd. has sought to open the doors of artistic expression by providing grants to artists and art organizations who are often excluded from mainstream opportunities due to their race, gender, or social philosophy,” reads a statement on the foundation’s website. Rosenstein reportedly wanted to make the mural “the centerpiece” of the gallery.

The Puffin Foundation commissioned the mural in early 2011, and in November Alewitz made a PowerPoint presentation of his mural that was well received by panel made up of officers and representatives of both the Museum and the Puffin Foundation, as well as other distinguished figures: Peter G. Carroll, Executive Director, Abraham Lincoln Brigade Archives; Esther Cohen, Professor Joshua Freeman, Victor Navasky, Publisher of The Nation, Bruno Quinson, publisher, Professor Christopher Rhomberg and Tom Roderick. “The mural proposal was met with unanimous and enthusiastic approval,” says Alewitz. 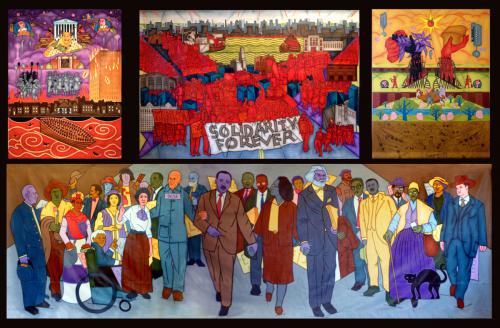 After a private presentation of the mural to Museum Director Susan Henshaw Jones, however, relations between Alewitz, the Puffin foundation, and the Museum began to sour. Alewitz completed the mural on February 24, 2014, but the Puffin Foundation informed him that the museum was refusing to exhibit the work. On January 19, 2015, Museum Director Jones used the occasion of Martin Luther King’s holiday to issue a statement, saying only that the mural “did not meet the curatorial standards or purposes of the museum.”

Alewitz says that Jones objected to representations Rev. Martin Luther King and Coretta Scott King being at the center of the mural, as well as to the absence of other social movements. Rosenstein wrote to Alewitz, “As New Yorkers, we also think that Martin Luther and Coretta Scott King should not be the central figures, as iconic as they may be.” He also suggested that the mural might include “…some less favorable movements (without demonizing or glorifying), such as New York’s nativists or the Women’s Christian Temperance Union.”

Alewitz disagrees with foundation and the Museum. “Anyone who thinks that the Kings should not be iconic figures for New York really needs to read the history of the civil rights and anti-war movement,” says Alewitz. He believes the museum and the foundation also objected to his “unabashed, partisan defense of the labor movement and a radical approach that the one percent, who are the donors to the museum, feel very uncomfortable about. I am not surprised that [the director] as the representative of them—because that’s who funds and runs these institutions—would object to the mural.”

Alewitz was willing to negotiate with the foundation and the museum, but they have been unable to find common ground. The National Coalition Against Censorship asked the museum to discuss the situation, but to date there is no response.

One could compare the “censorship” of his piece to the censorship of Diego Rivera’s famous mural “Man at the Crossroad” commissioned by the Rockefellers for Rockefeller Center in New York. Rivera began painting in 1933, but in 1934, apparently because it had an image of Vladimir Lenin, a leader of the Russian Revolution of October 1917, the Rockefellers had the mural destroyed before it was completed. The incident was celebrated in E.B. White’s famous poem, “I Paint what I See.” Interestingly Rivera was to be paid $21,000 for his work, while Puffin agreed to pay Alewitz $25,000 for his. While Alewitz’s mural, “The City at the Crossroads of History,” the name of which was clearly inspired by Rivera’s, has not been destroyed, still he is aggrieved. He accepted a rather meager payment for his work believing that his painting would find a permanent home where it would be viewed by hundreds of thousands of New Yorkers and other visitors to the museum and above all to many New York working people.

This is not Alewitz’s first controversy. When he was commissioned to paint the Socialist Workers Party’s “Pathfinder Mural”—Pathfinder is the name of the party’s press—the party attempted to direct his work, to which he objected. When Baltimore Clayworks, an arts organization, chose him for a residency in Maryland to paint a cycle of five murals called “The Dreams of Harriet Tubman,” depicting the life, activities, and aspiration of Tubman, a leader of the Underground Railroad, Alewitz again ran into trouble. He painted Tubman, who rescued African Americans from slavery in the South, holding a rifle. Associated Black Charities objected arguing that such an image was inappropriate in a city that had seen 300 murders in in the previous year. Another of Alewitz’s Tubman murals in Maryland was defaced with swastikas and racist slogans but was nevertheless successfully completed.

Alewitz has not shied from this current fight and he and his supporters have a petition campaign to pressure the foundation and the museum to install his mural.

To see the PowerPoint of Alewitz’s mural, go here.

To hear Alewitz talk about his fight for his mural, go here.

To see a “Censorship Fact Sheet” about the museum, go here.

To sign a petition in support of the installation of Alewitz’s mural, go here.

A Google images search will produce dozens of Alewitz paintings, banners, and murals.

Posted February 2, 2015 Labor, New York City by Dan La Botz
About Author
DAN LA BOTZ is a Brooklyn-based teacher, writer and activist. He is a co-editor of New Politics.