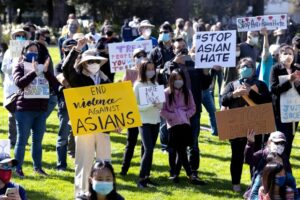 Asian Americans have always faced racism in the United States, but over the last four years there has been an increase in anti-Asian hate crimes. Asians Americans have been slashed, beaten, and burned, and at least one elderly Thai man died after being pushed to the ground. Others have been spit upon, suffered racial slurs, and have been shunned. Those who attack Asians include whites, Blacks, and Latinos. The recent growth of anti-Asian hate can be attributed largely to former President Donald Trump who referred to COVID-19 as the “China virus” or the “Kung Flu” to the cheers of the tens of thousands of supporters at his rallies.

Now a movement against anti-Asian hate is growing among Asians and with support from people of all races. Hundreds demonstrated in New York City this past weekend and other demonstrations took place in California. One woman’s sign read: “We Resist, Persist, Rise.” “If you are trying to decrease the level of stigma, decrease the level of discrimination and hate and xenophobia, words matter,” said John C. Yang of Asian Americans Advancing Justice. “We need smart policies so that people understand that we are all part of America.”

In January, President Joseph Biden issued an executive order condemning anti-Asian hate, the U.S. House of Representatives also passed a similar resolution, and New York Mayor Bill de Blasio also spoke out at the recent rally. The left has also spoken out. Not long ago, the Democratic Socialists of America participated in a Black + Gold Forum in an attempt to build bridges between Blacks and Asians. And three DSA South Asian candidates won elections to state or city office in November 2020.

Asian immigration began in the mid-nineteenth century. Today there are 21 million Asians in the United States, among a total population of 330 million. While economic situations differ greatly, Asians as a whole tend to be better off than others. According to a recent study, “U.S. Census data shows that median household income of Asian Americans was $77,166 compared to $62,950 for White households, $36,898 for African American households, and $45,148 for Hispanic-origin households.” Some Asians may be attacked precisely because they are better off.

In the 1850s Chinese laborers migrated to the United States to work in railroad construction and mining, competing for jobs with native-born workers. Then the Chinese began to open small businesses also became competitors with American businessmen. The California Workingmen’s Party led a violent anti-Chinese movement that burned immigrants’ stores and homes, while nationally Congress passed the Chinese Exclusion Act of 1882 (not repealed until 1943).

Similarly, in 1907 in Bellingham, Washington hundreds of white workers attacked South Asian workers, most of them Sikhs from Punjab, demanding that they be excluded from work in lumber mills. Japanese and Filipino workers in the fields of California also faced racist practices.

America’s wars in Asia—Japan, Korea, and Vietnam—also led to anti-Asian sentiment. After the U.S. declaration of war against Japan in 1941, the U.S. government removed from the West Coast and interned in inland concentration camps some 120,00 Japanese. The Korean War led to soldiers bringing home “war-brides,” that is, marriages between U.S. soldiers and Korean women, but when the brides came to the United States they often faced racial exclusion. Their interracial marriages were illegal in some states. At the end of the Vietnam War, hundreds of thousands of Vietnamese immigrated to the United States, principally to California and Texas where they too faced racial discrimination.

Global economic competition also led to racist incidents. During the recession of 1982, when Japanese automakers were gaining in U.S. markets, two white autoworkers beat to death 27-year-old Vincent Chin, a Chinese American man whom they mistook for Japanese. The men who killed him were charged with manslaughter and sentenced to three years in prison, but never spent a day behind bars. Today’s movement wants to prevent such things from ever happening again.

One comment on “Movement Grows to Stop Anti-Asian Hate”