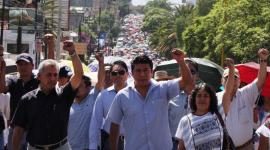 The National Coordinating Committee (la CNTE) and allied dissident groups in the Mexican Teachers Union (el SNTE) declared a general, indefinite strike on May 16. Tens of thousands of teachers left their classrooms, shutting down many schools in four states: Chiapas, Oaxaca, Guerrero, and Michoacán. There have also been protests in the State of Morelos and the State of Mexico.

This is a huge movement, encompassing at least two hundred thousand of Mexico’s more than a million teachers and it involves both bold civil disobedience by the teachers and violent repression by the government. This time, the government seems out to destroy the movement that has been the strongest force in the Mexican working class since the late 1970s.

The strikers in some locations have taken over highway tollbooths, shut down highways, and occupied government buildings. In Chiapas teachers took over four public and private radio and television stations while in Oaxaca teachers blocked the airport that links the state capital to the seaside resorts. In all of the striking states, teachers organized delegations to occupy public plazas in Mexico City the national capital.

The repression has been severe. Some teachers say it is the most serious attack on the teachers movement since the 1980s. More than 4,250 teachers have been fired for missing four days of work, absences often related to their participation in strikes or other protests. The Mexican federal and state governments have mobilized police who violently attacked the demonstrators in Chiapas leading to a pitched street battle involving tear gas, sticks, and stones and lasting three hours. In Oaxaca, la CNTE leader Rubén Núñez told the media that teachers were being arrested, though there were no charges against them and no warrants for their arrest.

In Mexico City the police blocked highway traffic on one highway into the city to prevent teachers from joining protests there. Mexico City police also dislodged teacher from plantóns or sit-ins in public plazas, though the teachers later returned to those or other plazas. In Guerrero police rough up teachers occupying a public plaza, forcing them to board busses to return to their hometowns.

Dissident teachers argue that the Education Reform Law’s required tests are unfair, that the law weakens union rights, and that it will lead to privatization of the public education system. A spokesperson for la CNTE says that the dissident teachers will not be intimidated. “We will continue the work stoppage despite the threat of being fired. We will not take one step back.”

In past years, Mexico’s dissident teachers often struck for weeks and nearly always took over public buildings, blocked highways, and occupied the public plazas of the state capital and the national capital—struck almost every year—but almost all strikers recovered back wages, few were disciplined, and while there were sometimes confrontations, repression was seldom so severe. (Though in the extraordinary events of 2006 in Oaxaca police and civilian death squads attacked strikers and over several weeks of strikes and protests as many as 20 people lost their lives.)

President Enrique Peña Nieto’s government and allied state governments appear to be bent on winning this one through a variety of tactics.

·      Striking teachers are being docked, and, if they miss four days of work, being fired.

·      A few union leaders have been charged with crimes while others are being arrested without charges.

·      Police are being forceful and violent in an attempt to intimidate strikers.

·      The government and the Mexican Teachers Union (el SNTE) are stonewalling the teachers, refusing to negotiate over the Education Reform Law or other issues.

·      Working teachers have received a contractual wage increase of 3.5 percent negotiated by the union.

·      Teachers who take the required tests are being praised, sometimes honored in public ceremonies.

These tactics are intended to isolate la CNTE and its allies from the rest of the union and to discredit them in the eyes of the public.

The teachers’ strike is taking place on the eve of the June 5 national elections when 12 states will choose governors as well as electing other local officials. At the time of the June 2015 elections, the union—to protest not only against the Education Reform but also against the September 2014 murder of six, wounding of 25, and kidnapping of 43 students of the Ayotzinapa Rural Teachers College in the town of Iguala, Guerrero—called for a boycott of the election.

The teachers union and the Ayotzinapa protest movement not only called for a boycott in June of 2015 but also attempted to force the boycott on the public by burning ballots and other election materials in Oaxaca City as well as in other places. In some areas that strategy led to conflicts not only with the authorities, but also with local communities who wanted to vote.

This time la CNTE is calling upon its members, supporters, and the public at large to vote for the Movement of National Regeneration Party (MORENA), the party led by Andrés Manuel López Obrador. La CNTE argues that voters should cast their ballots for MORENA in order to punish the other congressional parties virtually all of which signed President Enrique Peña Nieto’s “Pact for Mexico” that laid the basis for the page of a series of so-called reforms, including the election reform.

The president’s Institutional Revolutionary Party (PRI) holds the lead in polls in the State of Oaxaca; there are no elections this spring in the other states where the teachers are on strike (Chiapas, Guerrrero, and Michoacán).

Also a War of Words

The increasingly violent confrontation has been accompanied by a war of words. The Secretary of Public Education (SEP), Aurelio Nuño Mayer, told the media that, “An overwhelming majority of teachers have demonstrated their educational responsibilities by not participating in the unjustified work stopages promoted by the various currents of la CNTE in three states of the Republic.” Nuño Mayer has claimed that in Oaxaca and Michoacán approximately 85 percent of teachers were working, while in Guerrero the schools operated practically normally.

La CNTE has denied the government’s claims that most schools were operating normally. In Chiapas and Oaxaca, where the strike is strongest, there have been huge demonstrations of tens of thousands teachers, parents and others, though in some cases the marches took place on holidays or Sundays when school was not in session. In some states hundreds and in others a few thousand teachers have blocked highways or seized public buildings, indicating strong support for the movement. Thousands of teachers from seveal states have protested in Mexico City.

Dissident teachers have been demanding to meet with Miguel Ángel Osorio Chong, the Secretary of the Interior (Gobernacion), the office that historically meets with and makes deals between the government and opposition movements. He said that his office would not meet with the dissident teacher organization until they accepted the education reform law.

The head of the Mexican Teachers Union (el SNTE), Juan Díaz de la Torre, argues that 98 percent of Mexican teachers have accepted the education reform and and have demonstrated that by taking the evaluations required by it. (Failure to take the examination can result in termination and a number of teachers have been terminated for failing to do so.) He argues that la CNTE and its allies disdain the opinion of the majority of teachers.

De la Torre also accuses la CNTE of being controlled by “political interests that have nothing to do with education or teachers rights,” though he has not identified what those “interests” might be. He might be implying either the Party of the Democratic Revolution (PRD) or the Movement of National Regeneration (MORENA) party, both of which have links to and have spoken up for the teachers.

The dissident teachers have received support from other unions both in Mexico and abroad. In addition to parents who joined in support of the dissident teachers there have been some important instance of solidarity. In Juchitán, Oaxaca, some 500 members of the National Union of Health Sector Workers (SNTSS) marched in solidarity with SNTE Local 22, which is controlled by la CNTE.

Trinational Education Coalition, an alliance of Canadian, Mexican, and U.S. teachers, meeting in Vancouver from May 13-15, passed a resolution to support the dissident teachers movement.

The problem, however, is that as it has been for years, the dissident movement, powerful as it is, remains a force in just a handful of states. While there is widespread concern among teachers about the Education Reform Law, and though there are occasionally protests in other states, it is only in four states that the movement is strong. Only if la CNTE can mobilize teachers throughout more states in Mexico does it seem likely to be successful in turning back the Education Reform Law.

Still despite opposition from the government and the official union leadership, the dissident teachers movement pledges to continue its strike, demanding negotiation with the government over the Education Reform Law.

Posted May 31, 2016 Labor, Mexico by Dan La Botz
About Author
DAN LA BOTZ is a Brooklyn-based teacher, writer and activist. He is a co-editor of New Politics.