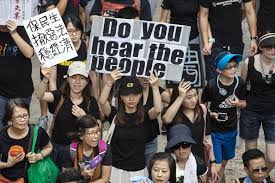 Comrades, students and youth of Hong Kong and Mainland China:

Once again Chinese youth have made history in the streets by standing up for people’s basic civil liberties and the right to self-determination!

Many Iranian youth support the mass protests in Hong Kong against an extradition law that would send dissidents/human rights activists to mainland China to be prosecuted as criminals.  We stand with you in your struggle and offer our unconditional solidarity!

People in both China and Iran live under authoritarian police states which present themselves as “anti-capitalist” and “anti-imperialist”, yet they use the same tools of capitalist and imperialist repression against unprotected communities inside and outside their borders. Supporters of the Chinese and Iranian states argue that “there are better social services in these countries”, but we know that such comparisons are false at best and dangerous at worse. We know very well that there is nothing “communist” in China’s foreign and domestic policies, just like there is nothing “revolutionary” in Iran’s foreign and domestic policies. But since their “enemies” are U.S. and European capitalists, they easily get away with wearing a hypocritical mask of “populism”.

In both Iran and China temporary contracts have become the bourgeoisie’s favorite weapon against the people. Safety and stability have become a luxury belonging only to the 1% elite while the rest of the society pays the heavy price of endless instability, greed and corruption. Even when students survive the increasingly privatized and commodified higher education, the unjust conditions of job and housing markets makes the prospect of a dignified life almost impossible.

Just like the United States, the Iranian and Chinese states are spending more and more of the national budget on militarism and imperialist adventures abroad while they cut more and more of the basic social services at home. They care more about crushing other people’s movements for dignity than fixing the unbearable living conditions of the poor and the working-class communities at home. They have no plan to end the growing capitalist structural deficiencies and contradictions, because they themselves are the crisis and the contradiction.

Their only solution is to blame everything on “foreign actors” and arrest those who dare to show the way out of this crisis. From the oppression of the Uyghur community in China to the oppression of Arab, Kurd, Baluch, Azeri, Bahai and other national or religious minorities in Iran, these racist states are a threat to pluralism, diversity and coexistence in our societies. Chinese and Iranian states have also been united in the democidal war against Syrian revolutionaries who have been struggling against all local-global forces of fascism, capitalism and imperialism for more than 8 years.

But  the yearnings for a better future are beginning to emerge today. The unbearable living conditions in Iran are giving birth to a new popular labor movement which is rising from the peripheries. The fresh wave of leftist student movement has also been standing firmly next to the workers despite mass arrests, raids, torture and forced confessions. Women are demanding their rights and refusing the compulsory hijab.

However, as expected, right-wing nationalism and xenophobia has also started to mobilize in times of change. They have began hijacking people’s imagination and representing themselves as an “alternative”. It is our responsibility to expose their chauvinistic and hateful politics. We know very well that in reality, what right-wing nationalism and localism want is to keep the center-periphery oppressive social and economic relations of the current regimes and simply replace the old capitalist elite class with a new one. We’ve been here before.

Many Iranian youth admire the radical direct actions and the mass mobilizations of Hong Kong youth in the streets. We honor the memory of the rebellious youth in Tiananmen Square who were massacred by the Chinese regime in June 1989. Your struggle is our struggle. Your victory will be our victory, and your loss will be our loss.

Originally posted on the Alliance of Middle Eastern and North African Socialist Website.