Meanwhile, what do we do about Bernie? 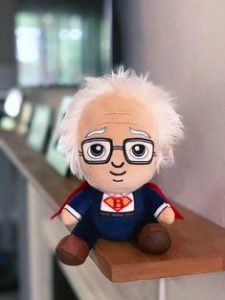 While I found the article critiquing the electoral road to socialism by Kit Wainer and Mel Bienenfeld found in the in the current issue of New Politics quite interesting and informative, I also found it problematic. This is mostly because it treated issues, which to me are not immediately on the agenda, as questions that might virtually lead to a split, questions that because they are not immediately on the agenda are necessarily speculative and abstract.

To me an immediate question is whether or not people who consider themselves revolutionaries should support Bernie Sanders for President and why or why not. Wainer and Bienenfeld acknowledge that in all probability, if he were elected, Sanders would have to rule, pretty much, by decree (that is, executive order). Sanders himself acknowledges this in a back handed way When asked how he could get any of his programs through in the face of a hostile Congress. But he also tips his hat to exactly the perspective Wainer and Bienenfeld are talking about in his most fundamental slogan, “Not Me, Us.” Granted, many of his most enthusiastic supporters don’t really get this and tend to see him as something of a savior, despite his sincere protestations to the contrary.

Besides their absence of any concrete advice regarding what we should all do now, what I find problematic in their review is its level of abstraction. Not that they don’t give loads of concrete examples, but for me they don’t seem to have much to do with what is actually going on in the United States, especially now. The closest thing we have to workers’ councils are the decrepit and moribund county labor councils or perhaps the episodic mass teachers strikes. Impressive, absolutely, but getting from there to revolution isn’t exactly self evident.

Comparisons to the Russian Revolution are unconvincing to me. Russia in 1917 was, after all, the last absolutist regime on Earth and there was nothing democratic about the Provisional Government. Presumably any genuinely democratic workers’ state would be governed by some kind of representative assembly. For all its shortcomings, is that not what Congress is? Granted there are many provisions in the Constitution designed to specifically protect property rights, but is that true of every jot and tittle of the entire document? I for one do not think so and while it is highly speculative it’s hard for me to imagine a revolution in which some alternative system of representation went head to head with the existing representative bodies. Even the National Assembly of the French Revolution was essentially the Third Estate reconstituting itself on the basis of one person one vote.

I realize that here I am doing exactly what I accuse Wainer and Bienenfeld of doing: raising a lot of issues that basically have nothing to do with the issue at hand: what should our position be on Sanders as socialists? Most of the revolutionary struggles of the 20th century were either against Stalinist regimes or Third World dictatorships. The two most prominent examples of something approximating a workers government in an industrialized democracy are probably the French Popular Front in the 1930s and Allende’s Chile. In both cases workers parties had a plurality in such governments, but not a majority. Even Kautsky, prior to World War I, counseled against such coalitions. After World War I it is my understanding that Kautsky was not against soviets or workers councils as instruments of civil society. Rather, he opposed them as instruments of state power because he saw them as less representative and therefore less democratic than a geographically based parliamentary assembly. It seems to me that any revolutionary movement in the United States, no matter how massive, would run up against the same problem.

In his excellent exposition of Russian soviets prior to Stalin some time ago in New Politics Tom Harrison characterized their structure as pyramidal, at least that’s how I understood his explanation. When challenged he defended this system in which, as I understand it, workers would vote only for the first, local, level of representation. Every higher level of representation would not be elected directly by the workers but chosen rather by the next lower level of representation. How is this different from when state legislatures used to pick U.S. Senators? I’m not suggesting that existing models of worker representation can’t be improved upon, but neither are they necessarily perfect models.

In his 1932 campaign book Norman Thomas, perennial Socialist Party candidate for President, devoted an entire chapter to whether a parliamentary system or a government of workers councils is more democratic. Thomas was hardly a great Marxist intellectual, nor did he think of himself as one. Nevertheless, he was and important public figure and the standard bearer of democratic socialism in the United States from 1928 until his death in 1968. As such his views on this matter are worth consideration and he concluded that there was simply not enough evidence to suggest that one or the other system was more democratic.

I am not suggesting here that a successful democratic socialist movement would not require a massive popular upsurge. Of course it would and Sanders says as much. But it does not follow from that that a government of workers councils is some how inherently more democratic than a geographically based parliamentary system. Indeed, quite the opposite may well be the case. In any event I acknowledge again that this is all highly speculative, which is my basic point. This is not on the agenda, and it is most certainly not a split question. At least not at this point.

Wainer and Bienenfeld bring up the issue of bureaucracy as though this is a problem inherent specifically to capitalism rather than a problem that any large, complex society necessarily faces. Of course bureaucratic institutions, by definition, are inherently undemocratic and as such are an impediment to the democratization of society, but it is not exactly self evident to me how a government of workers councils would be better equipped to democratize bureaucratic structures than would a geographically based representative assembly.

Finally, Wainer and Bienenfeld point out that our state based federal system provides geo-political spaces where reaction could continue to fester, but the opposite is also the case. The federal system also provides some limited protection where radical experiments could take place relatively protected from interference from the central government. The whole issue of dual sovereignty is extremely complicated and has as much to do with the geographical size of the United States as it does specifically with capitalism. In the here and now and in terms of historical experience, state based radical parties have generally had more success than something that starts from the beginning at the national level.

To summarize, I completely agree that a socialist revolution cannot take place without violence. Violence is already here. Capitalism is inherently violent, but insurrectionary violence is another matter. I also agree that a democratic socialist revolution cannot take place without the active engagement and involvement of a majority of society or at least a substantial minority and in the course of this activity both new institutions such as workers’ councils will be formed and existing institutions will be reformed and transformed. To say definitively that a government of workers’ councils will necessarily replace and displace geographically based parliamentary assemblies is essentially speculative. We don’t know how a democratic working class will chose to govern itself and society.

Meanwhile, what do we do about Bernie?

Posted January 30, 2020 Electoral Politics, Left Politics, Socialism, Uncategorized by Dan La Botz
About Author
Robert Gabrielsky lives in Los Angeles where he is a member of the Democratic Socialists of America.