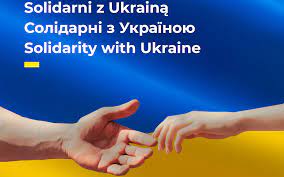 On the 24th of February, Russia launched an illegal and unjustified military invasion of a sovereign and independent state – Ukraine. We, as progressive parties from Ukraine, Lithuania, Finland, Czechia, Romania, Poland (…) strongly condemn this aggression as it disregards every value we stand for.

We categorically oppose an order in which the stronger imposes its will on the weaker by force – and this is how Moscow’s aggression must be seen. The Ukrainian people have a fundamental right to live freely, choose their leaders and govern themselves. The future of Ukraine should depend solely on their free and independent decision. Hence, it is with pride and determination that we express our solidarity with the Ukrainian people in their fight for dignity and sovereignty.

Such solidarity must not remain an empty slogan. In the face of this unprovoked aggression, Ukraine needs help to resist Russian forces and ensure the safety of its citizens. We call on the governments of our countries and the European Union to provide all necessary assistance. We support, inter alia, the sending of military equipment, the provision of water, food and medical help for civilians and the mobilisation of all possible diplomatic channels to establish humanitarian corridors for the evacuation of people and the supply of material means.

Our solidarity also finds an expression in echoing the demands of Ukrainian Sotsialniy Rukh and labour unions. Ukraine has been succumbing to massive external debt and spending about 10-15% of the GDP on its servicing. International loans, including those from the IMF, were granted on the condition that social spending was reduced, and their repayment forced people to save on basic needs and apply austerity in basic sectors of the economy. Today, the state will need resources to protect the civilian population and provide housing for displaced persons and medicine for the wounded. Ukraine needs to be freed from the burden of external debt and destructive neoliberal pressure. Therefore, we call on the European Central Bank to take over the cost of its servicing.

We need to remain attentive to the plight of all refugees that enter our countries fleeing war in Ukraine. Our governments must be held responsible for making sure that all refugees receive the same rights and treatment as their citizens – regarding labour conditions, access to housing and education as well as healthcare or to any other public service. In this context, we appeal to the European Union for solidarity and financial support in order to shore up social systems in the receiving countries.

At the same time, we must make sure that there is constant pressure to force Russia to stop its aggression and withdraw its forces from Ukrainian territory. The European Union and its member states must act firmly and without regard to business interests and lobbying. We call for the confiscation of Russian oligarchs’ assets in Europe and transferring them to the Ukrainian state. We also demand the exclusion of Sberbank and Gazprombank from SWIFT and for an immediate stop of fossil fuels imports from Russia into the European Union. We believe we can use the impact of these sanctions on our energy systems as an opportunity to hasten the green and just energy transition.