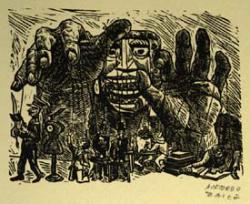 The Mexican left is more divided than at any time since the early 1980s as some 80 million Mexican voters will go to the polls on June 7 to elect 500 federal representatives, nine governors 641 state legislators, 993 mayor and 16 borough chiefs in Mexico City.

Four rival leftist parties will be competing for votes—the Party of the Democratic Revolution (PRD), the Workers Party (PT), the Citizens Movement (MC), and the Movement for National Regeneration Party (MORENA)—though is some cases they will ally with each other and in others with one of the two dominant parties: the Institutional Revolutionary Party (PRI) or the National Action Party (PAN). The Zapatista Army of National Liberation (EZLN), one of the country’s important left organizations, remains opposed to elections as always. Some in the Ayotzinapa protest movement—protesting over the killing of six and disappearance of 43 students at a rural teachers college in Guerrero–have called upon voters to abstain altogether.

Why is the left split? Principally because after Enrique Peña Nieto won the presidential election in 2012, he enticed both the PAN and the PRD as well as other parties to join his Pact for Mexico, creating a kind of government of national unity to pass what some have called his rightwing, pro-business “counter-reforms” in the area of education, labor, energy, and telecommunications. The PRD’s alliance with the PRI and PAN disgusted many on the left, leading to resignations or desertions to MORENA.

The deeper issue, however, is that the PRD, founded in 1989 as an alliance between former PRI leaders and leftists, always remained divided into several hard factions and then became involved in old-style corrupt political arrangements at many levels. Many walked away. Among those who left the party are its leading founder and former presidential candidate Cuauhtémoc Cárdenas, former Mexico City mayors Alejandro Encinas and Marcelo Ebrard, and most significantly Andrés Manuel López Obrador, another former presidential candidate who left to found MORENA.

Why haven’t the social movements been able to push politics to the left and push the left toward unity? While there were widespread protests over Ayotzinapa throughout all of Mexico, the protests have not been large enough, sustained enough, or cohesive enough to result in the transformation of a spontaneous social movement into political power. They are now largely over. Similarly with the recent farm worker strike in San Quintín, Baja California which, after a spectacular beginning, was quickly defeated. The most important movement remains that of the dissident teachers. The National Coordinating Committee (la CNTE) of the Mexican Teachers Union (el SNTE), while it commands the allegiance of tens of thousands of teachers in Chiapas, Oaxaca, Guerrero, Michoacán, and Mexico City and has significant power at the state and local level, does not wield power at the national level. While some in these movements hate the PRI and the PAN, many are now deeply disappointed with the PRD and some have reservations about Andrés Manuel López Obrador and his MORENA party. Yet, for many, abstention is not a very attractive option either. They want to cast a vote against “bad government,” but for whom to vote?

The PRI is Likely to Win

The PRI—the party of President Enrique Peña Nieto—currently has a plurality in both the Senate and the House and, according to polls, is expected to be the biggest winner on election day with about a third of the vote. The PRI’s allies—the Green Party (PVEM), the New Alliance Party (PANAL), the party of the teachers union, and the new Social Encounter Party—should give it a clear majority in both houses. The conservative PAN is expected to come in second with 25 percent of the vote, while the PRD and MORENA are expected to divide the left vote about 13 and 10 percent respectively. The PT and MC will get less than five percent each and there is some chance they could lose their ballot status.

A rule of thumb is that the Mexican electorate is divided into three large slices with the PRI, the PAN, and the PRD each having about a third in one election or another over the last twenty-five years. Now the left’s piece of pie (formerly represented by the PRD) has crumbled into cobbler. At the same time the PAN’s piece of pie has shrunk to a smaller slice because of the failure of the Vicente Fox presidency and disaster of the Felipe Calderón administration. So the PRI has the best chance.

Why will the PRI win? While fraud will of course play its party, the PRI has strong support from the corporate TV duopoly: Televisa and TV Azteca as well as a strong party organization in most regions of the country. Though it is true that neoliberalism and the privatization of industry and the breakdown of the ejido (collective farms) have undermined the old organization, still the PRI is effective in maintaining clientelistic relationships. The PAN, whose base is found historically in the financial elite, the active Catholic vote, and in the middle class, will despite the failures of Fox and Calderón probably do well several regions: the North, a few of the Central states, and possibly in Yucatan. The PRD will do well in Mexico City, Michoacán, and Tabasco, its historic bases, though it will lose some votes to MORENA. For MORENA, this is its first run and it remains to be seen how strongly it can both pull from the PRD and win disgruntled voters from the major parties.

While MORENA will generally be running alone, the PRD will in various states enter into alliances with the PRI, the PAN, the PT, the PVEM, and PANAL. These are just the sort of opportunistic arrangements that have led PRD leaders and rank-and-file members to leave the party. Some of them will surely vote for MORENA.

The Zapatista Army of National Liberation (EZLN) has made it clear since it appeared on the national scene with the Chiapas Uprising of 1994 that it has nothing but contempt for Mexico’s political system, for its parties, and for its politicians. As EZLN spokesman, Subcomandante Marcos particularly aimed his fire at the PRD and its candidates, calling for a rejection not only of the parties but also of elections. In 2006 the EZLN organized “The Other Campaign,” a national speaking tour calling not for voting in the elections, but rather for the overthrow of capitalism. When it was clear that the government had stolen the vote from López Obrador of the PRD, the EZLN refused to join the protests, a sectarian position that undermined its credibility and appeal in much of the Mexican left. The People’s Revolutionary Army, a small, underground guerrilla group, argues in the latest issue of its newspaper El Insurgente for “conscious political abstencionism,” rejecting elections in Mexico at this time.

The Ayotzinapa movement in Guerrero and some other parts of Mexico also calls for abstention. The Organization of the People and the Workers (OPT), which had been attempting to build a radical, left-labor party, appears to have adopted this posture as well. One Mexican radical argues that voting “will only restore some of the damaged legitimacy of the regime and the PRI government.” On the other hand, Raúl Vera López, the influential, left-of-center Catholic Bishop of Saltillo who has been calling for a Constituent Assembly to write a new Constitution and refound the country, is urging people to vote.

Will the campaign for abstention have any effect? In 2012, voters participated at a higher rate than usual as some 63 percent of voters cast ballots in both the presidential and legislative elections. We would expect the vote this time to be between 57 and 60 percent of the electorate if there were no campaign. Another important factor, however, is the high level of violence in states such as Guerrero and Tamaulipas which could interfere with the elections. At least two candidates and one campaign manager have been killed already.

Ironically, despite the national sense of horror at Ayotzinapa and the indignation at the “white house” scandal involving the President and his wife buying a house on favorable terms through a government contractor, it is most likely that the PRI will win. The movements are too weak and the left too divided to have any impact.

One has the impression that with the PRD/MORENA split we are at a major turning point in left politics in Mexico. The PRD represented a uniquely Mexican combination of social democracy and populism, and with its passing from dominance perhaps to marginality, the question is: What new force on the left might arise? At this point it is not clear.

Posted May 27, 2015 Electoral Politics, Mexico by Dan La Botz
About Author
DAN LA BOTZ is a Brooklyn-based teacher, writer and activist. He is a co-editor of New Politics.