It’s Time For a People’s Court 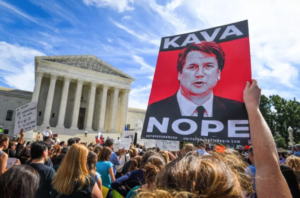 Draconian legislative attacks on abortion access in Georgia, Ohio and Alabama require a renewed defense of women’s and trans men’s bodily autonomy. The Supreme Court cannot be relied on to provide this defense under any circumstances. The American left should hear the call to defend Roe v. Wade and come back with a more radical demand: abolish the Supreme Court.

Justice Clarence Thomas, writing for the conservative majority in the Supreme Court decision overturning the court’s commitment to precedent set by previous Supreme Court majorities, wrote that “stare decisis is not an inexorable command and we have held that it is at its weakest when we interpret the Constitution.” A majority may rule as it likes; the until-now-sacred adherence to precedent is a matter of convenience. Justice Stephen Breyer, writing for the minority on the court, wrote that “today’s decision can only cause one to wonder which cases the court will overrule next.” The majority’s new prerogative to ignore stare decisis poses a renewed roadblock for all progressive efforts and threatens to strip women and trans men of bodily autonomy. We must entrust defense and advancement of rights to popular power, not to a historically conservative institution.

The Supreme Court is undemocratic and reactionary in its history and design. The court has a long record of taking decades to swing towards social justice, meanwhile handing down decisions that make real progress difficult. Landmark shifts in civil rights are marked by Supreme Court cases not because the court reliably decides in favor of protecting and extending social rights but because it is often the last thing in the way after public opinion and even legislators have climbed aboard the engine of social change driven by mass movements. At best, the court is ineffective, unable to enforce Brown v. Board or the decision meant to stop the horrific Indian Removal Act. Most often, it is a bastion of reaction, stymieing efforts to build a more just world. Recent—and, given the court’s history, relatively mild—examples: the court gutted the voting rights act, which led to renewed voter repression in the black belt; removed the Affordable Care Act’s mandate, effectively hobbling any chance that legislation had at lowering insurance premiums; took the brakes off bourgeois political spending with the Citizens United decision; crippled public sector unions in the Janus decision; narrowed the protections afforded to whistle-blowers by Dodd-Frank; and on and on. This historical unreliability is enough to make us rethink the wisdom of entrusting political judgment to a handful of judges whose legal careers invariably cement them in the hegemonic order. The court has never reflected the will of the people. This is by design. The court’s function is to enslave the living to the dead, binding us to the will of the slave owners and reactionaries who chartered the court. The court has and will continue to protect capital at all costs, and can only be used to advance social justice within that impossible confine. If we want to protect hard-won progressive victories, we must give the people the power to judge our laws.

A call to abolish the Supreme Court is not a call to abolish judicial review. No socialist, nor any progressive with common sense, should trust in a bourgeois legislature. Rather, the Supreme Court should be replaced with a people’s court, selected by lot with a requirement of residency and not citizenship. The court would sit for a year and participants would be given a salary during that time. A people’s court should have 150 seats. 150 persons is the upper limit for a deliberative body. Beyond that number and the difficulty of deliberation increases. In choosing the upper limit, we ensure the maximum number of people get to practice political judgment at a given time. This maximizes the transformative impact of that practice, encouraging the widespread an awareness of and use of world-building power among American residents. We already entrust to the people decision-making in our criminal courts, where they have little control over the norms they are asked to enforce. We should expand the people’s power of judgment and entrust judicial review to the masses.

Drawing lots was and is the way of democracy. Historically, partisans of democracy have considered elections aristocratic. Elections are meant to select the “best” of a class of eligible governors—as David Van Reybrouck writes, “a government led by the best—did that not mean aristokratia in Greek?” Sortition, or drawing lots, is the truly democratic practice. Lots eliminate the influence of personality and family as well as oligarchic tendencies. Selection by lot gets rid of the fundamentally aristocratic notion that some people are better than others and more deserving of a say, whatever the guise in which that notion comes to us. Drawing lots prevents the sorting of people into classes of decision-makers and subjects. Continuing in that same vein, drawing lots from the total pool of residents instead of citizens ensures that distinction is not smuggled through customs by excluding marginalized communities from citizenship. An elected court only gives us illusory power—the power to constitute another class to rule over us. As Rousseau wrote in 1762, the people “deceive themselves when they fancy they are free; they are so, in fact, only during the elections of Members of Parliament: for, as soon as a new one is elected, they are again in chains, and are nothing.” We must not turn over political judgment to the people only to have elected representatives steal it from them as legislative power has been stolen.

Drawing lots to establish a popular court is not enough to ensure just political judgment, especially not in a state built on slavery and genocide. The lot should be weighted to ensure the new court is liberatory. The lot should be weighted according to the following idea: identity populations are personalities. An identity community constitutes a fictive person, a “species of man” as Frantz Fanon might put it. Each community is itself heterogeneous, but shares basic constitutive experiences. These personalities all must make decisions together in order for any judgment to be actually democratic. Each personality, each community with its own set of common experiences and its own perspective and voice, must have an equal say. This is the truly progressive and liberatory interpretation of “one person one vote”. We must apply that principle at both the individual and social-historical level. We should weight the lot so that each gender, sexual and racialized community is represented in equal proportion. This would be simple enough math that all could understand it and be sure of its fairness. If we fail to do so, we will not be able to overcome Rousseau’s problem of interest groups. The hegemonic identity will institute tyranny of the majority, and democracy will be suffocating rather than liberating. As Rousseau rightly noted, we could never ask any person to accept such a body as legitimately expressing the general will, let alone their own will.

Establishing a people’s court along these or similar lines disproportionately represents marginalized communities who historically and presently don’t have access to the means of world-building and who are always disproportionately subjected to the current norms of political judgment. The court would be dominated by workers and caregivers since the overwhelming majority of American residents are both those things. The class interests involved in political judgment would change overnight as housewives, sex workers, day laborers, service and office workers, and the unemployed replaced lawyers and political appointees. Judicial review would be transformed from a conservative force to an organ of considerate popular power. Women and trans men would not have to rely on political appointees to protect Roe; black people would not have to place their faith in a White court to uphold voting rights; workers would not have to trust in lawyers to protect collective bargaining; those affected by disability and chronic illness would not have to count on the able bodied to defend their right to care and accommodation. Prisoners and their loved ones would decide cases on criminal justice reform; trans folks would judge transphobic laws; immigrants and the children of immigrants would write opinions on nativist policy; indigenous people would rule on betrayals of their traditional sovereignty. The people’s court would be a place where civil rights are protected and expanded by those to whom they matter most.

We all share in the labor of making a social world, but the political boundaries around that social world are drawn by bourgeois elites. Political judgment, even more than legislation or executive authority, is responsible for defining the norms that bound the political world. Devolving the power of political judgment to the people would be a real measure of democracy for the first time since colonization. To demand a people’s court is to demand a vast redistribution of power from bourgeois elites to the masses of people. A people’s court is the first step to creating genuinely public political space, a space for popular politics that is not cordoned off and divided up ahead of time by the people wielding actual power. A people’s court will give the people an institution where they can constitute their will for themselves. The people’s court could constitute a counter-hegemony to the bourgeois state. It would, speaking with the late Mark Fischer, “subordinate the state to the general will.”