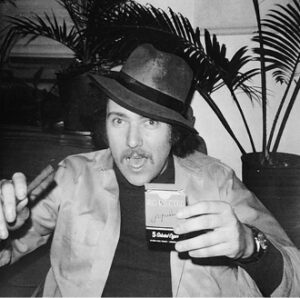 Michael Hirsch, a veteran labor activist, journalist, raconteur, and devotee of Karl and Groucho Marx, passed away on December 16, 2021, after a valiant multi-year struggle against cancer, myasthenia gravis, and other medical issues. He fought the good fight ’til he could fight no more.

Michael was born on Manhattan’s Lower East Side, the son of Joseph Hirsch, a ship’s carpenter and long-time member of the National Maritime Union, and Belle Patel Hirsch, a former member of the International Ladies Garment Workers Union. As a child, Michael played in his maternal grandfather’s shoe repair shop on Broome Street, using a small hammer to drive tiny nails into hunks of scrap leather. His lifelong commitment to social justice may well have taken root there. As the 19th century abolitionist Thomas Wentworth Higginson observed, “radicalism went with the smell of leather.”

When Michael was eight, the family moved to Washington Heights, a few miles, but a world away, from the Lower East Side. He attended P.S. 187 and graduated from George Washington High School, in 1963. By that time, Michael stood well over six feet tall, towered over his parents, and cut a dashing figure in khaki pants, penny loafers, and white socks! He was a serious “hoops player,” with a great head-fake and killer jump shot. Alas, posting-up was not his strong suit.

Michael began to gravitate toward social and political activism in high school – passions that would sustain him for the rest of his life. Over the years, he was involved in numerous protest movements and organizations, including the early Students for a Democratic Society, the antiwar movement of the 1960s and ‘70s, the International Socialists, Ed Sadlowski’s campaign for leadership of the United Steelworkers of America, the Democratic Socialists of America, the Left Labor Project, and New Jewish Agenda.

A talented wordsmith, Michael was a staff writer for the United Federation of Teachers, a freelance writer for The Indypendent, a contributor to The Village Voice, Democratic Left, Labor Notes, and New Labor Forum, and a cultural moderator for Portside. He was a longtime editorial board member of New Politics and Radical America.

Michael’s devotion to political activism was mated to an enduring commitment to the life of the mind. After earning a B.A. from Long Island University, in 1967, he received an M.A. from the New School for Social Research, pursued graduate studies in sociology at the University of Chicago, and completed an M.A. in journalism from New York University. A voracious reader, he acquired a formidable and wide-ranging collection of books that occupied pretty much every surface in the family’s Manhattan apartment.

Michael loved the music of John Prine, Sandi Denny, John Coltrane, Johnnie Hartmann, the Grateful Dead, and the Rolling Stones. When he first heard The Doors in 1967, he was floored, asserting that “they were better than the Beatles.” But left politics was his mainstay, the center of his intellectual universe. He loved to regale friends and family with stories of sectarian squabbles and factional infighting, and he thought long and hard about the problems and prospects of empowering America’s working people.

Alternately charming and exasperating, funny and disputatious, Michael was a big man with a big personality who largely charted his own course and had only two main regrets in his life: That he never finished his Ph.D. and that he passed up the opportunity to see John Coltrane and Ornette Coleman in concert!

Posted August 10, 2022 Left Politics, United States by Shannon Ikebe
About Author
MARK HIRSCH is an historian at the Smithsonian National Museum of the American Indian, in Washington, D.C. He earned an M.A. from the Center for Social History, University of Warwick, England (1977), and a Ph.D. in American history from Harvard University (1984). He is Michael’s brother.