The gifted political cartoonist Phil Evans passed away earlier this year in the seaside town of Hastings, England. He was 68. 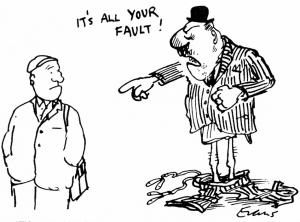 Philip James Evans was born in West Yorkshire and grew up in London, Uganda, and Scotland. His father taught English literature and his mother was an art teacher. As a teenager in Aberdeen he became active in the Youth Campaign for Nuclear Disarmament. He studied at the Sunderland Art College and the Leeds College of Art, and started drawing political cartoons as a result of his involvement in the anti-Vietnam War movement of the late 1960s. He joined the International Socialists (IS) during this period and contributed numerous illustrations, gag cartoons, and comic strips to Socialist Worker and other IS publications. During the 1970s and 1980s his eye-catching work frequently turned up in labor, tenant, and anti-war periodicals.

The successor organization to the IS, the Socialist Workers Party UK, published a collection of his cartoons in 1982, titled The Joke Works. His illustrations and cartoons also appeared in Trotsky for Beginners (1980), Marx’s Kapital for Beginners (1982), Ireland for Beginners (1983), Commodities: How the World Was Taken to Market (1987), The Politics of Childhood (1987), Best Pubs in London (1989), Best Pubs in Devon and Cornwall (1989), Understanding Economics (1995), More Years for the Locust: The Origins of the SWP (1997), and London for Beginners (1999). He dropped out of the SWP in the early 1980s but remained active on the left, supporting himself as a freelance cartoonist for labor movement and mainstream publications, including Tribune and the Radio Times. 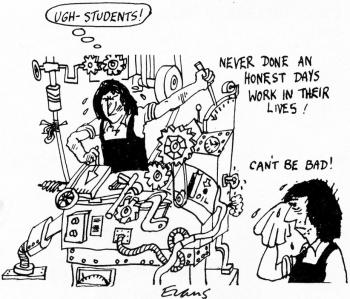 In his introduction to The Joke Works, Evans reported that, “When I was younger I wanted to be an oil painter, a portraitist. More recently I realized that to be a cartoonist is just as difficult—more difficult perhaps—because you have to get your hands dirty in the political fight. I have always been interested in propaganda—I’ve always felt that if you’re good at something then why not try to make a point with it? A little pamphlet, with cartoons, on the struggle of a tiny group of ordinary seamen against their right-wing union leaders, or textile workers against a sweatshop employer, is more important than the cracks on the face of an important diplomat or princess.”

In an obituary for the Guardian, Murray Armstrong described Evans’ cartooning as “funny, concise, and uncompromisingly on the side of the exploited and the oppressed.” His style “was bold and simple, but his characters had doubts, idiosyncrasies, and conflicting ideas and attitudes.…Evans’ keen observation of the detail of everyday life gave his cartoons an edge that was neither moralistic nor dogmatic.” Armstrong also notes that he “could be difficult when disturbed at his work but usually, as one friend noted, ‘he could charm the spuds off a hungry pig.’” 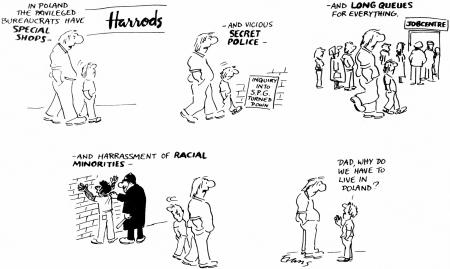 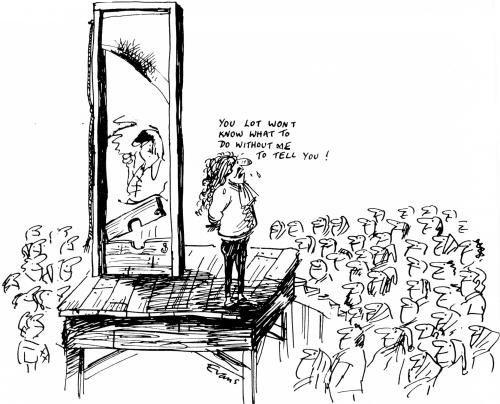 Phil Evans moved from London to Hastings in the early 1990s to be close to his mother. He is survived by his sister, his brother, and his three granddaughters. He left his papers, drawings, and royalties to his eldest granddaughter. 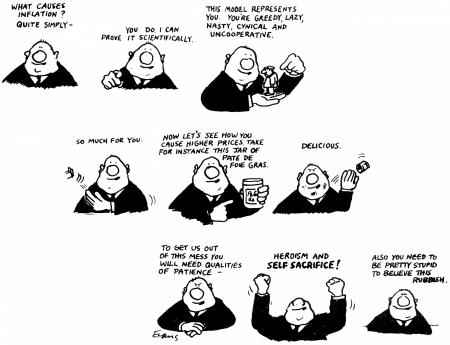 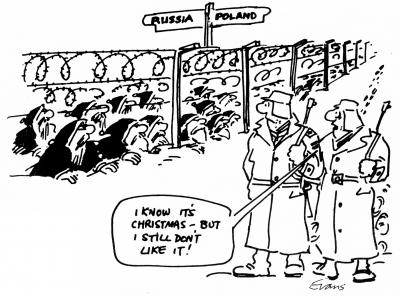 Posted July 2, 2014 by newpolitics
About Author


Kent Worcester’s latest book, Peter Bagge: Conversations, will be published by the University Press of Mississippi in 2015.