As we go to press, the hearings of the U.S. House Select Committee on the January 6 attack have revealed the seriousness and the scope of the conspiracy to prevent the winner of the 2020 election, Joseph Biden, from becoming president and keep Donald J. Trump in power. While the planning and execution of the attempted coup were clumsy, January 6 and the related events represented the first such attempt to nullify an election, overthrow a duly elected president, and install an illegitimate autocrat. The hearings have made several things clear: the transformation of the Republican Party—the leadership of which orchestrated the attempted coup—into a far-right party, the continued growth of armed far right groups and outright fascist militias, and the growing threat of political violence. The investigations may also chip away at Trump’s supporters: six in ten Americans say Trump should be charged with crimes.

At the same time, and in line with these developments, the Supreme Court, now dominated six to three by right-wingers, has overturned Roe v. Wade, ending national abortion rights; eliminated restrictions of some gun laws; curtailed the EPA’s ability to regulate emissions and ruled that if states provide public funds to private schools, then they must also provide them for private religious schools. Last year the Court delivered a ruling weakening voting rights. SCOTUS is on its own parallel path to an authoritarian state.

In this issue of New Politics attorney Elizabeth Rapaport discusses the end of Roe, Dan Davison and Ewa Pospieszyńska ask what comes next, and Dawn Marie Paley looks at the feminist movement in Mexico.

William I. Robinson and Salvador Rangel argue that the capitalist global system is undergoing profound crises, but that emancipatory forces face significant challenges. As it did a century ago, fascism once again contends with the left for the allegiance of the discontented, as Martin Oppenheimer discusses in his “Will the Real Fascists Please Stand Up?” And Nicole Fabricant looks at the economic, health, and environmental impact of fracking in Appalachia, a region in which discontent runs deep.

South of the border, progressives in Latin America have gained ground at the ballot box, and social movements continue to push against austerity, high fuel prices, state violence and extractivism. A recently ended Indigenous-led uprising in Ecuador serves as a reminder of the power of grassroots mobilization in the face of reactionary governments.

In Colombia, where protests a year ago brought on brutal repression, Gustavo Petro and Francia Márquez, running from the left, won in the second round in June 2022, a defeat for conservative forces that have for so long ruled the country. Electoral gains were also made in Honduras where social democrat Xiomara Castro took office in January, as did leftist Gabriel Boric in Chile in March. In Bolivia Luis Arce won the presidency after the political crisis in 2019. Even so, much of the hemisphere, from Brazil to Guatemala, remains under the thumb of the conservative, Christian, and militarist right.

The left has already raised concerns about some of these progressive governments, specifically about AMLO’s militarism in Mexico and Boric in Chile. The latter has reinstated a state of emergency used to suppress Mapuche organizing, something he pledged during his campaign that he would not do. Though some optimism is warranted, in Colombia, as elsewhere, hope for meaningful change remains intimately tied to the ability of social movements to avoid cooptation and capture by politicians.

We have for four months been focused on Ukraine, fighting to defend itself from the Russian invasion launched by Vladimir Putin. Unfortunately, some on the left either openly support Russia or are pressing for Ukraine’s surrender. Some argue that NATO caused the war. While we are well aware of the danger represented by military alliances such as NATO, it is not the culprit in this case. New Politics supports Ukraine’s right to defend itself and to get arms to do so wherever it can. Our journal has been collaborating with Commons, the independent Ukrainian progressive publication and with Social Movement (SR), the Ukrainian socialist organization.

In this issue, Andrei of Sotsialnyi Rukh offers his reflections as a Ukrainian socialist on the war; Tom Dale asks why some on the left don’t stand with Ukraine; Pietro Maestri writes about the impact on the Italian left of Russia’s war against Ukraine; and Khury Petersen-Smith discusses the issue of sanctions.

Two articles – by Michael Karadjis and Peter Ranis — hone in on one of the key questions on the left today: is China socialist and, if not, what is it?

As always, we are happy to feature writing about writing, new and old. Ali Shehzad Zaidi discusses the work of Pakistani poet Faiz Ahmed Faiz with unpublished English-language translations by Daud Kamal, while Martha Sonnenberg examines the dialectical imagination of Victor Serge’s novels.

In review essays, Llanon Davis offers a critical take on Graber and Wengrow’s The Dawn of Everything and Dan Fischer takes up two books offering solutions to the environmental crisis. Hank Kennedy reviews Paul S. Hirsch’s Pulp Empire: A Secret History of Comic Book Imperialism, the story of comics in World War II and the Cold War. Ravi Malhotra discusses Renton’s Against the Law: Why Justice Requires Fewer Laws and a Smaller State, which puts law in the context of labor and environmental issues, and Frieda Afary takes up a collection of interviews with Iranian women political prisoners.

We are sad to report that Michael Hirsch, our long-time comrade on the New Politics editorial board, died on December 16, 2021. We offer remembrances by Mark Hirsch and Jason Schulman.

Finally, in the face of powerful rightward currents in American politics, we are inspired to see an uptick in labor and social movements. Workers have begun to organize, creating unions at 150 Starbucks cafes, at a huge Amazon warehouse in New York, and at Apple stores. This rise in labor organizing, accompanied by protests and walkouts—strikes have doubled—represents a sea change in what has been for decades a largely stagnant labor movement. And, hundreds of thousands have been marching to defend abortion rights and regulate firearms.

Happy reading, and we’ll see you on the picket lines. 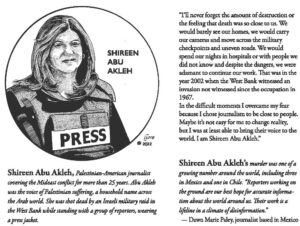