The Left and the Environmental Crisis

Humanity today faces what may be its greatest crisis—the destruction of our environment threatening the continued existence of life on Earth. The Left began to address this issue over the last two decades, but only in the last few years has it been recognized that coming to grips with the environmental crisis must be a top priority not only of the Left but of all the peoples of the world. 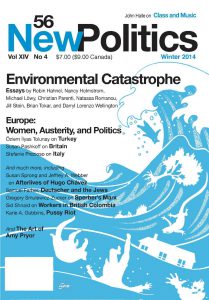 From the Editors
The Left and the Environmental Crisis

The Left and the Environment, Nancy Holmstrom
Economic and Ecological Transformation—There Is No Alternative, Jill Stein
Shadow Socialism, Christian Parenti
The Myths of “Green Capitalism,” Brian Tokar
Ecosocialism: Putting on . . .