The Greek and the European Crisis in Context

At the beginning of the new millennium, Greece, a weak, peripheral nation in the European economy, was still licking its wounds from the greatest politico-financial scandal in its post-war history — the collapse of the Athens stock exchange. The wild stock market speculation had been fuelled by often-repeated statements from various government officials (with Finance Minister Yiannos Papantoniou leading the chorus) that the upward trend was an accurate reflection of the robust state of the real economy.

Wrestling on Shaky Ground: Israel, Palestine, and the Decline of a Superpower

Since the beginning of 2011, Israeli politicians, generals, and diplomats displayed a growing nervousness in anticipation of "September," i.e., the proclaimed Palestinian intention to seek a full United Nations Membership for the State of Palestine.

Music of Change: Politics and Meaning in the Age of Obama

Obama, Austerity, and Change We Really Can Believe In

Barack Obama took office three years ago on a euphoric wave of aspirations.

From Occupy Wall Street to Occupy the World: The Emergence of a Mass Movement

The Occupy movement has changed the American political landscape. We are at the opening of a new mass movement and a radicalization that presage an era of coming social upheaval and class conflict that require the left to both analyze these developments and to develop a strategy to intervene. The left today, small, divided, and weak, must develop an approach that will make it possible for it to grow and unite so that it can influence events. 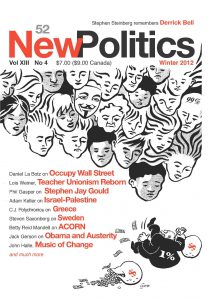