The financial collapse of 2008 was a sudden, shrill alarm that abruptly exposed neo-liberalism to be nothing more than a fool’s paradise. For decades, many Americans marched to the hypnotic music of free market fantasy and willfully ignored the low, droning crescendo of social decay. The hypnotic melody of constant growth, full employment, low taxation, and rugged entrepreneurialism muffled the warning sirens that had gone off around them.

Costas Panayotakis’ Remaking Scarcity is a bold attempt to combine the analysis of the ecological limits of capitalism with the call for “economic democracy.” A work that is both topical (with frequent discussion of contemporary developments such as the Arab Spring and the crisis in Greece) and scholarly, the book unfolds as a series of overlapping discussions on four key themes: scarcity, inequality, democracy, and ecological crisis.

The Crisis Upside Down

The financial crisis that began in 2008 has accelerated many economic trends already at work in the neoliberal period of capitalist development. Wages continue to decline, the class struggle bursts out in contradictory fits and starts at the same time as the societal value of work, and therefore the people who do it, continues to depreciate.

No Movement, No Justice!

Most of the current literature on the international education crisis gives little to no big-picture context for planning a fight back. Given the parochial view of most popular education authors, many earnest, well-intentioned proposals for fight back are written within parameters the ruling class tolerates.

Bosnia and Herzegovina: The Left and the Forgotten Partition

On January 9, 1992, as the Socialist Federal Republic of Yugoslavia splintered, the Serbian citizens of Bosnia and Herzegovina (BiH) announced the independence of the Republika Srpska (RS). The precipitous announcement of Serbian autonomy could be considered the diplomatic origin of the RS quest to ethnically cleanse Bosnia, thereby making it suitable for inclusion in a Greater Serbia as was the goal of the RS’s first president, Radovan Karadžić.

HUAC and the Red Trilogy of World War II

ONE OF THE CONCERNS that supposedly brought the House Committee on Un-American Activities (HUAC) to Hollywood was that the Communist Party-U.S.A. had quietly infiltrated the film industry. Members of the CP and fellow travelers were charged with having surreptitiously inserted ideological messages into mainstream American cinema. Screenwriters were considered particularly culpable. Among the primary HUAC concerns was what it considered grossly flattering and inaccurate depictions of the Soviet Union.

As the housing crisis plows through our neighborhoods, it leaves behind the same bleak scenes. The former owner separated from her home, her neighbors, her children’s schools, and possibly her children themselves ― a tragedy anonymous to millions of analogous others across the country. Neighbors staring down the dead, wall-eyed windows of the vacant homes on their block and seeing the promise of rising crime and falling attendance at block parties.

Special Section on Asia and Africa

END_OF_DOCUMENT_TOKEN_TO_BE_REPLACED 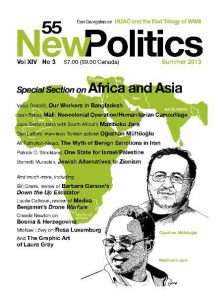 From The Editors
Letters
Special Section on Asia and Africa

Our Workers in Bangladesh: Toiling for $50 Per Month, Vasja Badalič
Long Live the Tyrant! The Myth of Benign Sanctions, Ali Fathollah-Nejad
Turkey, the Erdoğan Government and the Left . . .

END_OF_DOCUMENT_TOKEN_TO_BE_REPLACED

Removing the Stigma of Past Incarceration: “Ban the Box” Laws

Picture yourself going into a job interview, as many readers of this publication no doubt recently have done or will do in the future. You have a solid record of experience relevant to the position, but you will still need to stand out in a large field of candidates for the same job. Imagine your employer asking the usual questions about your background and suitability for the job, which you handle with ease. Then comes the question: “You checked the ‘yes’ box for the question on whether you have been convicted of a crime.