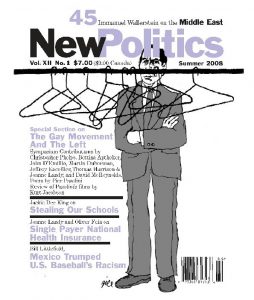 END_OF_DOCUMENT_TOKEN_TO_BE_REPLACED

WITH PUBLIC EDUCATION, teacher unions and classroom teachers under one of the most severe attacks in history by corporate funded think tanks, education profiteers, self-proclaimed pundits, and politicians from both parties, along comes a hagiography of Albert Shanker by Richard Kahlenberg, to add to the drumbeat.

LET ME USE MY SPACE in part simply as memory, reflections by a homosexual whose sexual orientation, at 78, is academic.

Socialism without fucking is dull and lifeless.

— The heroine, WR: The Mysteries of the Organism,
a 1971 film directed by Dusan Makavejev.

THE PRESENCE ON MANY CAMPUSES of a significant number of liberals ("Of course gay people are entitled to the full rights of citizenship") proved critical in allowing lesbian and gay studies to gain a toehold. But as I kept discovering, unpleasantly, a willingness to grant us basic rights wasn't remotely the equivalent of actually wanting to know about our lives — let alone of believing that our distinctive perspectives might have anything of importance to say to them.

Can the Left Ignore Gay Liberation?

THE JESUITS TRAINED ME WELL. My high school speech and debate coach taught me how to speak in complete paragraphs and to construct what he described as a "seamless" argument. Many years later, a close friend and fellow historian used the same word in reference to my historical writing. He described one of my books as a "seamless" narrative. Well, that skill, if I have it, has eluded me as I've tried to compose my contribution to this discussion. So, instead, I offer a series of disconnected, but I hope relevant, observations.

GROWING UP IN A COMMUNIST FAMILY and in Communist circles in New York City in the late 1940s and 1950s sexuality of any kind was never discussed, ever, in any context, for any reason. I am not laying claim to any kind of universal experience in saying this; I am only commenting on the absence of discussion in my own experience.

THE GROWTH OF SOCIALISM in the United States has been hampered by the lack of imagination of the leaders of socialist thought. The appeal of the socialist has always been to the future, with a paradisiacal vision of economic plentitude and true democratic freedom. That is — the level of appeal has been a mixture of economic and social goods and leisure in a milieu of democratic-liberal sentiment. This has been good but not good enough.

On Socialism and Sex: An Introduction

PREFATORY NOTE: While researching a book on African-Americans and the anti-Stalinist left in the archives last summer, I stumbled across a striking and long-forgotten document, "Socialism and Sex," in a 1952 discussion bulletin, The Young Socialist. In one page, its author H. L. Small — almost surely a pseudonym — provided an elegant, concise exposition on behalf of destigmatizing consensual sexuality between same-sex lovers.

We Can Do It! The Case for Single Payer National Health Insurance

[Ed. Note: This is a chapter in a forthcoming book Ten Excellent Reasons for National Health Insurance, eds., Mary O'Brien, M.D. and Martha Livingston, Ph.D. (New Press).]
THE TIME HAS COME for single payer National Health Insurance in the United States. We have excellent hospitals, skilled practitioners, the technological infrastructure — and we're already spending enough money to insure everyone and to improve access to care for many who are covered today by inadequate plans. All we need is the political will.

TEACHERS IN EVERY PART OF THE WORLD are in the forefront of the struggle to ensure that children receive an education — whether in U.S. cities, the mountains of Chavez's Venezuela, in civil war-torn Nepal, in Europe's towns and countryside, or in the refugee camps of Sudan. In prosperous nations, identified by global justice activists as the global north, teachers' wages, their voice in policy, and the quality of their working conditions have been reduced.

THE FEDERAL "NO CHILD LEFT BEHIND" law is in trouble. Critics and supporters alike predict that it will not be reauthorized in this legislative year. A growing chorus of voices from the grassroots and from major national organizations is calling for an overhaul of the law or even scrapping it altogether. Many teachers and parents hope that a newly elected Administration next year will examine the damage being done by the current law and take steps to change it.

[Note: The first two letters below appear in New Politics no. 45. Further correspondence is available on the web only. Additional comments are welcome; please submit to the editors.]