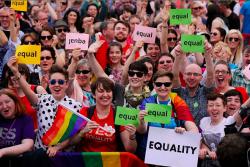 While the youth turnout at polling stations generated a buzz, there were many older voters who also voted yes. These people are of a generation who grew up in a Catholic conservative state, a generation suffocated by stringent Church laws that prohibited an equal society. This was their chance to reject something that had blighted most of their lives, a chance to turn the tables on the Catholic Church.

The margin of victory for the yes side in the gay marriage referendum showed modern Irish people’s rejection of church morals. Some 62.1% of the electorate voted in favor of marriage equality compared to 37.9% who voted against.

All political parties in the country supported the introduction of gay marriage which left the no side backed up by conservative Christian groups and the Catholic Church who ran a campaign on fear. Posters from the no side were adorned with children that played up to the “normal” family nucleus. One poster from the no side depicted a baby with a man and woman; its slogan was: “Children deserve a mother and a father.”

The referendum had nothing to do with children; it was a marriage referendum, yet the no side ran their campaign on the fear of what may happen to children. They cried foul of the prospect of two men or two women raising children, which is rather ironic when you look at the history the Catholic Church has with children in Ireland. Where were these same people to speak out for the many children who had to spend miserable childhoods in church run industrial schools across the land? Where were they when unmarried pregnant women were sent to the dreadful Magdalene laundries and then had their babies taken from them and sold to the highest bidders in America and elsewhere? Where were these people when so many children were abused by the likes of the Christian brothers in schools and churches across the country?

Those times thankfully and hopefully are gone. With the overwhelming acceptance of gay marriage, the people of Ireland sent a message to those who want to keep us in a backwater.

On that fine day in May, as count centers across the country began the process of counting the votes, a surge of anticipation was bubbling up across social media and on the ground. By early evening the country was heaving in celebrations.

At the main count center in Dublin castle, thousands thronged in its courtyard to listen to results coming in. The place was awash with rainbow flags, singing, dancing, happy people young and old, mothers, fathers, children, all there to be part of history.

While the streets burst with jubilation, a number of people made their way to a quiet park outside the city center at Fairview where they lay their “Yes to Equality” badges and rainbow flags on a bench in solemn dignity.

In 1982 a gay airport worker in his early 30s called Declan Flynn sat on that very bench when he was set upon by a gang of thugs and beaten to death. It was a time when gay people were hunted down by such bigoted bastards and little was done to prevent it. Church and state turned a blind eye to such activity and while the men who carried out the murder of Declan Flynn were arrested, they later received suspended sentences.

This was an Ireland where gay people were treated as second class citizens while the Catholic hierarchy lorded over its flock with menace but, now Ireland has changed utterly. Ireland has voted in favor of equality. Ireland has rejected hate. Ireland has emerged as a leading light in what can be a very dark world.