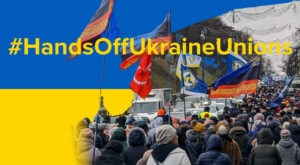 Interview by Ignacy Jóźwiak, from the Polish trade union OZZ-IP, member of the International Trade Union Network of Solidarity and Struggles.

Vitaly, first of all, tell us what the current situation of workers workers in Ukraine is. What do your union members do?

Some go to work and others stay at home or hide in bomb shelters. Some are trying to go to Poland, others have gone to Western Ukraine to stay with their families.

Yes, war does not give leave. Those who have not left and for whom circumstances allow it, work. Even on the territory controlled by the Russian Federation.

What is the current situation of workers in Ukraine?

It is very bad, the situation of workers, and their rights, will now be the last concern of all.

So, what role can trade unions play in these difficult conditions of war, and how can we support you?

I see two main areas of support. The first concerns the protection of Ukrainian réfugié.es.nes and Ukrainian migrant.es.nes in Poland. And the second is fundraising for citizens who have remained in Ukraine and become refugees or have remained in territories where hostilities are taking place.

As for Poland, unfortunately, a large part of Polish companies will try to take advantage of the context. The réfugié.es of Ukraine do not know the regulations, do not speak the language, so the situation is very difficult. They will be forced to take different jobs than they had. I am very concerned about this huge illegal exploitation that is going to be done by our fellow citizens of Ukraine. With such an influx of refugees, this problem will be much more acute than in 2015, 2016. That is why we need the help of Polish trade unions and European trade unions in general to help ukrainien.es workers  protect their rights. I hope there will be as little need for your help as possible.

The second direction in which the Polish trade unions could help us is the organization of the delivery of basic necessities, essential medicines that are already indispensable in Ukraine and will be even more so in the near future. If we consider our experience of fourteen years in Donbass and apply it to the current situation in Ukraine, in major cities like Kiev and Kharkiv, where hostilities are ongoing, with the population level it will be a huge catastrophe. If these actions are extended for another week, we will have a major humanitarian crisis, which has already begun. You have to try, even if you can’t prevent it, at least to minimize it. That is why I hope for the help of the European trade unions.

What would you like to say to trade unions and people from left-wing movements in Poland, Europe and the world?

I would like to ask everyone to support Ukraine, support Ukrainian réfugié.es.nes,  Ukrainian migrants and help everyone in Ukraine. Stay with us. Together we will win. It is important to send a clear signal to employers that there will be no room for their possible unfair practices. They must be afraid of this: we are already angry now, do not get angry even more.