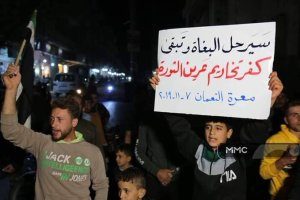 Over the past few days a popular uprising has broken out across Idlib against the hardline Islamist group HTS (formerly Al-Qaeda linked Nusra) which is militarily dominant in much of the province.

The recent uprising began when HTS increased Zakaat (taxes) on a number of goods and services including bread, electricity and olive oil .

In Kafar Takharim, a town in north-western Idlib, which is dependent on olive oil production for income, locals refused to pay increased taxes and attempts by HTS to control the olive oil presses.

HTS surrounded the town and demanded that locals hand over a number of individuals who participated in the protests under threat of retaliation. The locals refused and determined to continue their resistance against the militants.

On 6 November HTS forces besieged the town and began attacking it with mortar and machine gun fire killing at least 3 people and injuring others. But the locals continued resisting and all around Idlib towns and villages rose up in solidarity with Kafar Takharim, demanding that HTS and it’s leader Jolani leave the province. People took to the streets in Idlib city , Salqin, Maarat Al Nu’man, Darkush, Samarda, Ariha, Kurin, Armanaz and elsewhere. People from Armanaz and Idlib city began marching towards Kafar Takharim to try and break the siege but were blocked by HTS militants. On 7 November protesters from Salqin managed to break into the town from the north.

Popular resistance to HTS has been a regular occurrence in Idlib province and chants against Jolani are regularly heard at the anti-regime protests which are held almost every Friday. Many see the group’s authoritarianism as no different from that of the regime.

HTS militants increased their control over the province in January following intense fighting with rebel groups. Since then it has attempted to impose control over civilian governance through the creation of the Salvation Government which has taken over service provision, local councils and education despite the wide-spread resistance of locals who have courageously attempted to defend their autonomy and the democratic institutions they established following liberation from the regime.

People were further outraged by wide-spread arrests which have targeted civil society activists and media workers some of whom are reported to have died under torture in HTS-run prisons. HTS is widely believed to have been behind the assassinations of Raed Fares and Hamoud Jneed in November 2018 who were key figures in revolutionary organizing in Idlib and involved in the popular independent radio station Radio Fresh.

In September large scale protests erupted against HTS and the continuing aerial bombardment of the province by the regime and Russia. The regime intensified its assault on the province in April conducting a scorched-earth campaign against residential areas which has caused around half a million to flee, has killed over 1,000 and has directly targeted civilian infrastructure including over 50 hospitals and medical centres.

The dominant narrative promoted by the regime and supporters of Syrian fascism is that Idlib is a ‘terrorist enclave’. The presence of a few thousand extremist militants is presented as justification for the campaign of extermination waged against Idlib’s civilian population of some three million people, which includes one million children.

Today’s uprising should challenge this narrative. Syrians have continually resisted all forms of authoritarianism and sought to defend their autonomy and desire for freedom and democracy since 2011.

Despite being trapped between the regime and extremists, Idlib remains home to many inspiring civil initiatives and outpourings of creative resistance. Just a few weeks ago, 20 year old rapper Amir Al Muarri released the fierce track ‘On All Fronts’ produced in Idlib. The video (which has subtitles in English, Spanish and Russian) provides a portrait of the province and the diversity of its residents who continue to survive and resist despite living apocalyptic conditions. He spares no criticism for the brutality of the regime, the armed factions which have hijacked the revolution and the foreign interventions of Russia, Iran and Turkey.

It’s people like Amir and the civilians risking their lives to protest today who are Syria’s future and who defy lazy assumptions that the choice Syrians face is between a fascist regime and Al Qaeda. There’s always been a third option.

Posted November 12, 2019 Civil Liberties/Repression, Human rights, Iran, Social protests, Syria, Turkey by Jason Schulman
About Author
Leila Al-Shami is British-Syrian, has been involved in human rights and social justice struggles in Syria and elsewhere in the region since 2000, and is co-author (with Robin Yassin-Kassab) of Burning Country: Syrians in Revolution and War (Jan 2016, Feb 2018).