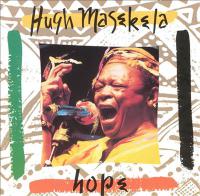 Now 75 years old, Masakela remains one of the world’s great musicians, and Mahlasela’s magnificent voice—he sang his moving “Say Africa”—was the perfect complement. They were backed up by Francis Fuster on the conga drums, Ian Herman on drums, Abednigo Sibongiseni Zulu on bass guitar, and Mongezi Ntaka on guitar, a fabulous team.

Before the concert, Masakela spoke to an audience of professors, students and community members about the relationship between art and social movements. Asked about the situation in South Africa today, Masakela told the audience, “We fought for freedom and we got democracy—and we’re still trying to understand what that is.”

While careful not to mention the ruling African National Congress (ANC) government—telling the audience “I hope you have bail money”—he was clearly critical of the current regime. The freedom movement, says Masakela, gave way to administration, and administration became a “private preserve.”

“We’ve got this democracy, but what is it? The poor of South Africa are still there as they were in apartheid times.” 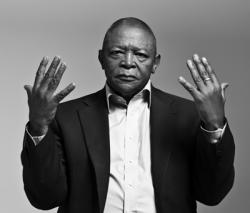 “The views of the artists of the freedom struggle don’t sit well with the new administrators, because these artists still focus on injustice,” he said. And there is still injustice in South Africa, Mandela suggested and alluded to the massacre at Marikana where the South African government’s security forces killed 44 striking miners on August 16, 2012. He compared the situation in South Africa to that in the United States after the civil rights movement, saying that even after great movement that “the police still shoot and kill African people in the streets of America.”

“Very often after liberation, the liberation movement’s leaders become the new dictators, though we don’t have that in South Africa," he said ironically. "In the underbelly of South Africa, nothing has changed. The rich are still rich and the poor are still poor and little trickles down.”

Yet, said Masakela, he still had hope for the future, both because the South African people had fought for over three hundred years against the Europeans who tried to take their country and because the government of South Africa is still young.

Masakela and Mahlasela are continuing a heroic tour, having performed with Dave Mathews in October 2014 at Carnegie Hall while in that same month Masakela give the Steve Biko Foundation Memorial Lecture at the London School of Economics, an edifying and inspiring discussion of the South African freedom struggle that continues today.

Posted February 20, 2015 Culture & History, South Africa by Dan La Botz
About Author
DAN LA BOTZ is a Brooklyn-based teacher, writer and activist. He is a co-editor of New Politics.