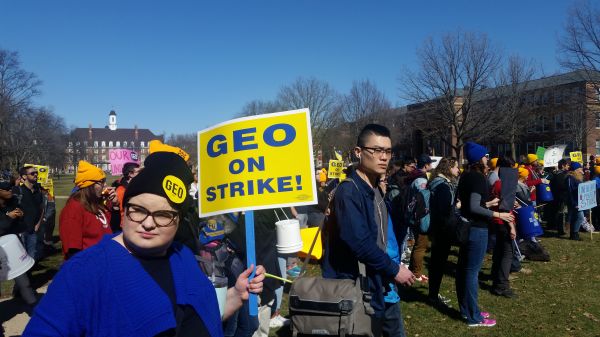 Amidst an upsurge of militancy among educators in places like West Virginia and the UK, graduate students in the US Midwest carried through the longest strike in University of Illinois history.

Members of the Graduate Employees’ Organization, which represents about 2,700 teaching and graduate assistants on the U of I Urbana-Champaign campus, started withholding their labor on February 26 and did not pack up their picket signs until a tentative agreement was reached with the administration on March 8. They voted at the Urbana-Champaign Independent Media Center that night, and the union announced the next day that the agreement was approved by 98% of voting members.

The strike was over. In addition to securing a raise and improving healthcare coverage, the union obtained contract language protecting tuition waivers for graduate student employees. The latter had been a major sticking point in negotiations and became a major impetus for the strike.

“Before the strike the administration wanted to bust our union,” said Marilia Correa, a PhD student in history and the co-president of GEO. “I believe they were committed to changing the language on tuition waivers to weaken our union. Together, we stopped their efforts. We stayed out for a long time.”

During that time, union members tried a variety of tactics. Dozens occupied the president’s office on March 6.

Not the university president, nor the chancellor, nor the provost, had ever been to a single bargaining session with GEO, Correa said.

“Since they refused to meet with us, we went to them,” she added.

Using the hashtag “#occupyUI” on Twitter, GEO announced members brought their sleeping bags and would stick around until they got a fair contract.

The union tweeted that police were stationed at all entrances once the occupation was underway, and police prevented a professor from entering the building to join the demonstration.

Officers and union members did not have any clashes with police, though, Correa confirmed.

The lack of confrontation prevailed even though Andreas Cangellaris, vice chancellor for academic affairs and the university provost, sent a message to students advising them to “please contact the department that offers the affected class or call the University of Illinois Police Department” if they had “concerns” or experienced “any difficulties” during the strike.

In addition to the occupation, members continued picketing entrances to several buildings on campus until the union reached their tentative agreement with the university, Correa said.

The 2018 GEO strike started the same week that 150 years prior Illinois Industrial University, the precursor to UIUC, opened its doors to students. While the duration of the late February-early March strike was unprecedented for UIUC, the graduate student workers had several examples in history, recent and otherwise, to draw inspiration from.

Lecturers were in their second of a strike against pension cuts and the privatization in the United Kingdom when graduate student employees in Illinois hit the picket lines on campus. As the GEO strike neared its end, Oklahoma teachers – who, like West Virginia educators, have been some of the lowest paid in the country – announced that they would walk out of classrooms on April if they were unable to get a raise. In West Virginia, teachers defied restrictions on the right to strike and rejected the initial agreement between their official union leadership and the state legislature.

“Administrators all around the world are trying to make education more profitable,” Correa said about the concurrent struggles. “We all need to push back on this effort no matter where we are. Education is not supposed to be a product for profit. It should be accessible to all. Our fight in Champaign-Urbana is a fight for access to education, and so is the fight in West Virginia and the UK.”

Educators in West Virginia were able to draw inspiration from the stories about militant miners who made news during their state’s infamous “coal wars” in the early 20th century, which culminated in the Battle of Blair Mountain, the largest armed uprising since the Civil War.

Likewise, graduate students in Urbana-Champaign could draw on a militant labor history of their own.

Illinois is notably the grave site of the Haymarket Martyrs of the late 19th century who helped popularize May Day as an international workers’ day after labor organizer August Spies made remarks before being hanged that have been etched into labor history.

“If you think that by hanging us you can stamp out the labor movement – the movement from which the downtrodden millions who toil in want and misery, the wage slaves expect salvation – if this is your opinion, then hang us! Here you will tread upon a spark,” he said, but here, and there, and behind you, and in front of you, and everywhere, flames blaze up. It is a subterranean fire. You cannot put it out.”

Those metaphorical flames Spies spoke of rose about a century later in Central Illinois, about an hour from Champaign, where in 1995 an estimated one in four households were directly affected by strikes against A.E. Staley, Bridgestone/Firestone and the equipment manufacturing giant Caterpillar, as historian Sharon Smith documented. Decatur, Ill., Smith noted, was termed a “war zone” by those in the labor movement at the time. Those strikes, as Smith suggests, occurred following workers’ struggles against the three industrial titans that had started in the early 1990s, when many graduate students now attending the state’s premiere public institution were kids.

The UIUC campus itself also has a recent history of labor unrest.

In 2009, the GEO staged a strike that lasted a single day.

As with the more recent and protracted work stoppage, tuition waivers were the “focal point” back then too, according to Kevin Taylor, who was a master’s student in philosophy and a GEO steward at the time.

“Because a place like U of I relies so heavily on teaching assistants” – in fall 2015, the school ranked among the top 10 universities nationwide wherein TAs teach the most classes – undergraduate students often formed a stronger bond with graduate students than they did with professors, Taylor said. “They saw us more than they saw them.”

Seven years later it was the non-tenure track faculty’s turn to withhold their labor, which they did for two days in April 2016, after more than 18 months of negotiations failed to produce an agreement on issues like multi-year contracts and reappointment notifications.

Shawn Gilmore, who was president of the Non-Tenure Faculty Coalition Local #6546 when they organized their two-day action, said then that his union had “a lot of solidarity” with the GEO when they went on strike several years prior. Gilmore said his union worked with the secretarial pool to process room switch requests for classes that would be affected.

Correa said that this time around many organizations not affiliated with UIUC offered space to professors who did not want to hold classes in picketed buildings.

Gilmore, who is now secretary of NTFC Local #6546, said his organization urged the university to bargain with GEO in good faith during this last strike.

“While we are prohibited from striking in solidarity,” Gilmore said during the recent graduate employees’ strike, “we have provided support for our fellow unionists in GEO, including donating to their strike fund, supplying materials, food, and strategy support, and by urging our members to participate in their pickets, and honor the buildings they are striking as fully as possible, while still honoring our collective bargaining agreement. GEO has clearly expressed its members’ concerns and now is exercising its legal option to strike. NTFC had to do the same in 2016 to settle its first contract; the parallels between these situations, as well as the faculty strike at UIC in 2014 and faculty strike at UIS in 2017, are striking. It is fair to say that GEO’s struggle is our struggle.”

Assistance from other unions was not limited to UIUC campus – or even to the Midwest. The union representing graduate student workers and undergraduate tutors across the University of California system, UAW Local 2865, which organized its own two-day strike on UC campuses in 2014, contributed $1,000 to the strike fund GEO created.

Solidarities aside, the term “labor struggle” remained apt in the organizing work GEO activists did before and during their ~11 day action.

The hardest part had to do with educating the entire bargaining unit about the strike, Correa said.

“Although we have many members who are engaged with the union, many grad workers have many responsibilities and are not able to always stay connected with the union so closely,” she said. “Thus, we had to go on office visits and tell people about the strike and what was at stake for all graduate workers. These visits required a lot of time from members.”

Despite this, the word spread. By the first day picketing had effectively shut down Lincoln Hall, one of the most frequented buildings on campus.

“Before the strike the administration wanted to bust our union,” she said. “I believe they were committed to changing the language on tuition waivers to weaken our union. Together, we stopped their efforts. We stayed out for a long time. This was the longest strike in U of I’s history. This long strike showed me that we can combat injustice together.”