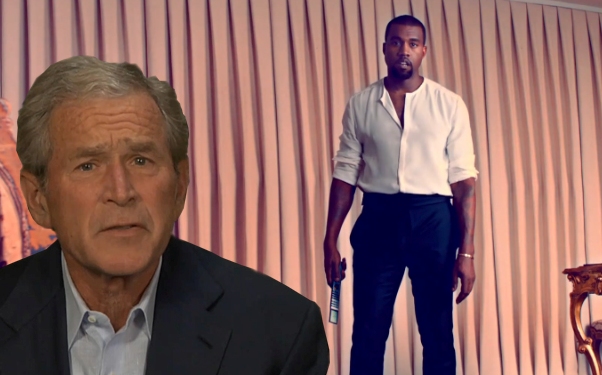 I was sitting in a one-bedroom apartment watching the telethon for Hurricane Katrina when it happened. After a commercial break, Kanye West stood nervously looking like he was about to do something that would end his career. He was fidgety and sweating when he said it: “George Bush doesn’t care about Black people.” It was a transcendent moment for Black America.

Kanye articulated what we’d all felt watching the aftermath of Katrina: neglect. It was impactful, but also deeply misunderstood. Kanye West was ridiculed. Bush called it a nadir of his presidency. The backlash to his statement never diminished this unmistakable fact: Mr. West was right.

Kanye's assertion "George Bush doesn't care about Black People" is misunderstood if you read it as a statement only about Bush, the man. Kanye's statement comes from a democratic understanding of the president as the face of the American Empire. Historically (and in that moment), America drags its feet when responding to calamities suffered by people of color; that is, if it responds at all. There has been much hand wringing about the death of black people at the hands of the police, but that is not the only thing that ails black America.

Poor healthcare, poverty, unequal sentencing, inadequate prison oversight, and de facto school segregation are all adverse conditions that disproportionately affect people of color in this country. There has been a great deal of talk about these ills, but aside from the Republican-contested Affordable Care Act, we have yet to see meaningful policy implemented to correct them. If the president is the face of America, then Kanye’s analysis still holds.

George W. Bush recently returned to New Orleans. He was invited to attend a ceremony marking the ten-year anniversary of Hurricane Katrina. When he spoke about the disaster, he said, "The storm nearly destroyed New Orleans…” President Bush is as wrong in this statement as Kanye was right a decade before.

George Bush was the face of America in 2005. He was ultimately responsible for the horrible response to the catastrophe that disproportionately impacted the lives of working-class black people in that city.  The slow response of the Bush presidency still affects black people in New Orleans. The black middle class has left, poverty is above the national average, and what has been called rebuilding is really gentrification at the expense of the poor.

With that understanding, it is safe to say that Kanye was right. And because of the continued impact of Bush’s presidency, his words are relevant today.  George Bush (still) doesn’t care about black people.

Lawrence Ware is a professor of philosophy and diversity coordinator for Oklahoma State University’s Ethics Center. A frequent contributor to Democratic Left and contributing editor RS: The Religious Left, he has also been a commentator on race for HuffPost Live, CNN, and NPR.