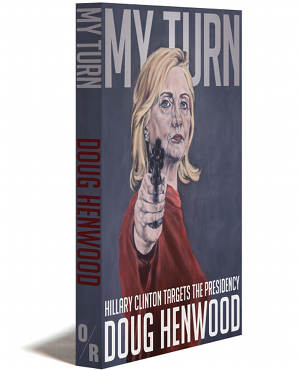 Doug Henwood’s My Turn: Hillary Clinton Targets the Presidency (O/R Books), published in late 2015 when it seemed like she’d take the Democratic presidential nomination without a significant challenge, does a masterly job of exposing the unappetizing corporate-Democratic slop on the end of Clinton’s fork. Hillary Clinton talks a populist game now, but throughout her career, she has acted as a neoliberal warrior-cum-austerity-freak, not a genuine force for social change. Feeding off corporate money, she is certainly not a liberal, a progressive, or a populist.

Assaying her deficits is where Henwood shines. Reminding readers “the U.S. president is essentially the chief executive of the global elite,” he charts Clinton’s rise from “the Rose Law firm, which represented the moneyed interests of Arkansas.” In that job, she was the architect of a legal challenge to a Little Rock ballot measure that had significantly shifted electricity rates from residential to commercial customers. She argued that the rate change was an unconstitutional “taking of property” from corporations.

Could Donald Trump, Paul Ryan or Rand Paul have put it worse?

In defending her husband’s welfare “reform” initiatives, which gutted public assistance to the poor, Clinton declared that the plan “would motivate and equip women to obtain a better life for themselves and their children,” when, as Henwood notes, “the whole point of welfare reform was disciplining the poor, not helping them.” She has repeatedly promoted “personal responsibility” over government-aided social solutions, and her record on economic issues includes her embrace (until recently) of free trade over fair trade, six years on the Walmart board, and spearheading and crashing what Henwood calls an “impossibly complex” health-insurance scheme in 1993-94.

When covering her 2000 Senate race, The New York Times wrote that “she went out of her way to note her support for the death penalty, welfare restrictions and a balanced budget.”

As a senator, she was uninspired. Henwood, using the upper chamber’s argot, likens her “to a workhorse, not a show horse.” She worked prodigiously long hours, but with “not much to show” for it … other than an unwholesome friendship with the Republican leadership and the chamber’s fundamentalist prayer group. In 2003, she “cast her vote for the Iraq war without having read the full National Intelligence Estimate,” Henwood notes. That report, available to Congress uncensored, was skeptical of the Bush administration’s claims that Iraq had chemical, biological and potentially nuclear weapons, and that dictator Saddam Hussein had connections to al-Qaeda. Then-serving Florida Sen. Bob Graham, no noted peacenik, read it before voting against authorizing the war. Why didn’t Clinton?

“Other than warmongering, defending creditors and eagerly making friends with the opposition, her Senate accomplishments were minimal.” Henwood writes.

As Secretary of State, Clinton was among the most vociferous opponents in the Obama administration of reversing the 2009 coup against Honduras President Manuel Zelaya. In her ghostwritten memoir, Hard Choices, she admits she used her position to ensure that Zelaya would not return to office, even though he had not finished the term Honduran voters had elected him for.

The Guardian in June characterized her as “the leading champion in office to push for the overthrow of Muammar Gaddafi in Libya, despite Pentagon reluctance.”

She also used her position for what she loftily called “economic statecraft” — aiding corporations with financial deals abroad. Microsoft, Boeing, GE and others returned those favors with massive contributions to her family’s ostensibly philanthropic nonprofit Clinton Foundation. The foundation’s philanthropy, Henwood demonstrates, was both business-centric and hugely incompetent when it came to helping the world’s poor in job creation and disaster relief, as in its failed reconstruction efforts in Haiti.

The foundation’s deals, “like the Clinton family itself, are beautiful emblems of our political economy at its highest level: the intimate bonding of public and private through money,” Henwood concludes in one of the book’s strongest chapters. “[The Foundation’s] impact points to profound structural limitations of the philanthropic approach to social problems — a strategy promoted by the neoliberal stripping of the state of its better functioning and passing off the business of melioration to foundation program officers.”

Unlike Bernie Sanders, Henwood does think that Clinton’s use of a private server for emailing was a big deal, “certainly symptomatic of her desire for secrecy and control … To normal people, those not intoxicated by the Clinton charm, it still looks shady.”

After the valiant Sanders challenge, Clinton has again emerged as the great hope to stop a Donald Trump presidency and a Republican-dominated Congress. While the plus side of defeating Trump’s personality cult of loudmouthed bigots is clear, the actual benefits of a Clinton administration would be meager. She wouldn’t appoint outright reactionaries to the federal courts, and there might be a modest increase in the federal minimum wage or maybe Social Security benefits if the Sanders-Warren wing of the Democratic Party can prevail upon her.

Hillary Clinton is no second coming of the New Deal. She will never say, let alone act on, what Sanders told his supporters: “We understand that our mission is more than defeating Donald Trump. It is transforming our country.”

When I catch her act, I don’t think first of enlisting in a popular antiracist front against the fascist noise of Trump and his supporters. I think of Emile Zola‘s line in Germinal, “There’s only one thing that warms my heart, and that is the thought that we are going to sweep away these bourgeois.”

Hillary Clinton is the same person who 16 years ago launched her Senate campaign by describing herself as “a proud New Democrat.” There’s nothing proud about that. She’s the non-Trump, the default candidate. Her biggest appeal: that Donald Trump is worse. Me, I live in New York. Trump is highly unlikely to carry the state. I’m voting Green.