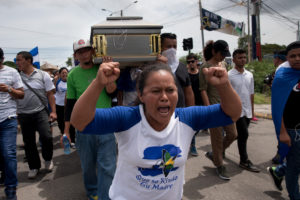 This awakening was not about ideologies, but for the country and against a common adversary: the Ortega-Murillo dictatorship. Nobody prepared us or financed us.

HAVANA TIMES – We all asked for changes, but never thought of demanding, living and writing them. April is a month that brings with it a lot of dry heat and the winds of revolution. Many were those who criticized my generation for permanently being on devices, cellphones or social networks, but almost nobody predicted that we were silently accumulating all the social discontent of eleven years of Daniel Ortega’s authoritarianism, plus the fatigues of the eighties and nineties.

We started the tenth of April 10 shouting an alert regarding the fire that was destroying “Reserva Biologica Indio Maiz” (Biological Reserve). For the most part, we were strangers who for the first time were participating in sit-ins and chanting slogans. Without realizing it, we were marking the beginning of the end, by demanding the Ortega Government to act. The protest reached another level on April 18, when the demand was to repeal the newly imposed Social Security reforms. Already on April 19, the national cry was the same as today: They must leave!

Before April we had, on the one hand, a Nicaragua submerged in apathy, kidnapped by appearances and with a conformism that allow others to accumulate power and to nest a nepotistic and criminal dictatorship: the Ortega-Murillo dictatorship. On the other hand, we had another Nicaragua represented by peasants, feminists, LGBTIQ groups, political activists, among others, who struggled from their spaces against this dictatorship. They must be recognized for having prepared the way for us to arrive in April.

Some of us young people lived a social discontent, everything seemed to be more of the same and we lacked role models. Nobody thought for us, because no one represented the feelings of youth. It even seemed that we did not believe in ourselves. There were few oases, like the classrooms at the Central American University, were we could vent our idealism and desire to remake our country, even if only on the blackboard. All this changed and for every evil there wa s a solution: the uprising, not to allow the abuse of power.

During the dawn of April, we saw the best of Nicaraguans: the determination for social change once and for all, overflow of solidarity, the historical courage of a struggling people and the effectiveness of working together, although we were “disperse vitalities.” We also saw the worst: the repressive and murderous arm of the dictatorship and its operators, the blindness of fanaticism and the hypocrisy.

On a daily basis, in each community or village, we amended the ways to resolve the conflict, through civic and peaceful resistance, because we considered that the success of the nonviolent struggle is to group more people under the same interest. We did not believe in violence, therefore, even if it was more complex, we did not want to repeat past mistakes. The youth are the first to want peace!

While we were involved in the different forms of protests, carrying the blue and white flag, we realized the power we had to corral a regime that was staggering, after a month and a half of daily mobilizations. We started having role models in an unfortunate way.

First were our heroes, those killed by the dictatorship. Today their names are treasured in our memories or on the walls of Masaya, Jinotepe, Leon, Esteli and the Caribbean Coast. Others are alive, but without freedom, imprisoned without being able to feel the sun. Nothing is hotter than the “Infiernillo” (little hell) or colder than the cement of “La Esperanza.” Others wear a soutane and they are called Baez, Alvarez or Mata. Some give away water and they are street vendors, or were in the barricades and roadblocks, carrying only their desire to return and something to eat.

In these twelve months of struggle, we have realized that changing reality will be costlier. Also that we have done a good exercise as a society, monitoring and being part of the processes to build an incipient democracy, ensure our human rights and demand justice. We have won some victories and advances, which are not the result of chance or handouts, but the sum of efforts of the youth, men and women who took the streets, losing the fear to demand a path to change, that also became the slogan that we all have plotted.

We have the challenge and the opportunity to make a real change. For that, we need to travel a difficult path, which goes through the struggle that will unleash the transition from a dictatorship to democracy, the democratic transition itself and the long-awaited consolidation of democracy that we all want.

We are in the process of getting out of the crisis of the Ortega-Murillo regime, as well as getting out of the dictatorial scheme that will allow us to rebuild the state. Before all this, a common agenda that draws red lines such as: not to allow Daniel Ortega to govern from below, that politics is not privatized by the elites and that, even in the midst of differences, unity persists. All this to establish in Nicaragua a political, social and economic model that represents, listens and operates heterogeneously, given that April made possible a spring of political actors and, social spaces that should be reflected.

The dream is to rescue the social gains for a more inclusive and prosperous country, that there are institutions and equal opportunities. That the young people who gave everything, despite having nothing, are rewarded. First of all, is to make sure that we close the cycle, and that this will never be repeated. We believe that truth, justice, reparation, and guarantees of non-repetition will enable us to honor the legacy to this eternal April in 40 years.

Needless to say, because of his stubbornness and cruelty, Ortega managed to get Nicaragua to unite against him. This time, his “divide and conquer” did not work. This fight is not about who did more or less, since we have all contributed regardless of age, social position, education or origin. It is exciting to see that [religious] believers marched with non-believers, others who participated in the [1979] revolution along with those who were in the counterrevolution [Contras-1980s].

This awakening was not about ideologies, but for the country and against a common adversary: the Ortega-Murillo dictatorship. Nobody prepared or finance us. We only decided to change the present and future of our beloved Nicaragua, attached to the blue and white flag that represents us with the banner of freedom, justice and democracy.

The future belongs to all. We want a Nicaragua where we will not be killed for thinking differently. That is why it is time for decent Sandinistas to abandon ship. They should not continue supporting crimes against humanity. Those who are not stained with blood, it is time to react inside their structure. It is not necessary to approach “El Carmen” [the presidential bunker/residence/headquarters] to see the weakness of the regime. It holds up only with arms, and the fear of those who wear the uniform is palpable. We all know that it is a corpse and that soon we are going to his burial.

I am inspired by the humility of Nicaraguans. For the memory of our heroes, the legacy of their families, the firmness and dignity of our politically kidnapped, the braveness of all those forced into exile, the resistance and insistence of the people in general and because it hurts all of us to breathe. We will never stop struggling.

We will not get anywhere, if we do not go together. United we will triumph, and without unity there is no victory.

*University student. Member of the Nicaraguan University Alliance (AUN), and the Civic Alliance for Justice and Democracy.

The photo at top: Susana Lopez demands justice for her son Gerald Vasquez murdered during the Ortega paramiliary forces attack on the UNAN Managua University and a neighboring church where the students took refuge in June 2018.  Photo: Carlos Herrera / Confidencial

Originally published in Confidencial. This translation taken from Havana Times.

Posted April 17, 2019 Uncategorized by Dan La Botz
About Author
University student. Member of the Nicaraguan University Alliance (AUN), and the Civic Alliance for Justice and Democracy.