Ellen Meiksins Wood: A Marxist who put Class at the Center of Her Analysis 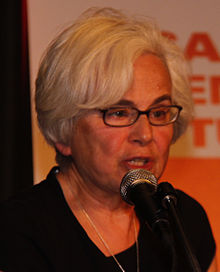 Ellen Meiksins Wood, the wife of former Canadian New Democratic Party leader Ed Broadbent, has died of cancer at the couple’s Ottawa home at the age of 73.

She was a noted intellectual figure on the international Left, whose studies of class, politics and political ideas influenced several generations of thinkers and activists.

Wood’s writings were thought-provoking and luminous.

She first came to a wide Left audience with The Retreat from Class: A New ‘True’ Socialism (1986). This was a collection of her intervention in debates, conducted through the pages of New Left Review and the Socialist Register, that took place in the wake of Eric Hobsbawm’s famous polemic, The Forward March of Labour Halted? (in Marxism Today, 1978 – expanded in book form with replies from supporters and critics in 1981).

Many Left intellectuals not only backed Hobsbawm’s view that the material importance of class institutions in shaping politics was declining with the drop in numbers in the industrial working class, but extended this to question the relationship between class and politics itself.

Post-Marxists began to argue that a plurality of ‘democratic struggles’ and social movements would replace the central place of the labour movement in politics. Some contrasted  ‘civil society’ a more complex and open site of democratic assembly to the alleged ‘monolithic’ vision of politics embodied in the traditional labour movement. In a diffuse way this was associated with the once fashionable idea that “a “post-modern” society dissolved reality in ‘simulacra’. Others claimed it  meant the end of “grand narratives” – or more bluntly, that the ideas of socialism and the Left was splintering so quickly that only a fragmented series of ‘critical’ responses were possible against neo-liberal regimes of ‘governance’.

Wood argued for the importance of class in shaping not just political interests but the potential constituency of  radical socialist politics. Fights over power were at the centre of Marxism and these were part and parcel with disputes over exploitation and the appropriation of the social surplus. The ‘new social movements’, the women’s movement, the rising ecological movement, campaigns for racial and sexual equality, were interlaced with class conflicts. Democracy could not be abstracted from these relations. To appeal, as writers such as Ernesto Laclau and Chantal Mouffe did, to the formation of a new hegemonic strategy based on  relations of “equivalence” between various democratic demands ignored the basic facts about class and power. Like her comrade Ralph Miliband, Wood saw socialism as an effort to bring together people around the central issues of exploitation and oppression in democratic organisations that could shape politics. This had historically been the result of conscious action, and this kind of collective work was needed more than even against a very real and growing grand narrative – the reality of neo-liberal economics and government assaults on working people, and the unemployed – in building a new regime of capitalist accumulation.

In academic as well as left-wing activist circles Wood became known for her “political Marxist” approach to history. This focused on the issue of the transition from feudalism to capitalism and social property relations. The Pristine Culture of Capitalism (1991) was a summary of this approach. It was also directed against the views of Perry Anderson (editor of New Left Review) and Tom Nairn (today best known for his Scottish nationalism). In the early days of the Second New Left they had asserted  that the so-called ‘archaic’ British state was a reflection of a an equally ‘pre-modern’ capitalism. They also claimed that the ‘supine’ bourgeoisie – who abdicated political rule to the ‘aristocracy’ (which they claimed continued to dominate UK politics in the early modern period) – had been mimicked by a supine working class. In later writings Anderson talked of the need for a new wave of democratic modernisation to bring the country into line with the ‘second’ bourgeois revolution of modernity.

Wood, by contrast, pointed out that the UK had a developed capitalism, indeed it was the most ‘modern’ form of capitalism. Its state form was related to its early advance, and its allegedly old-fashioned trappings – from the monarchy downwards – had not thwarted capitalist expansion but arisen in relation to needs of its own bourgeoisie. The labour movement had developed in struggle with these forces, not in deference to them.

On all the essential points present-day Britain was no more, no less, ‘modern’ than anywhere else in Europe or in any contemporary capitalist state. Indeed it was for long a template for bourgeois democracy. In particular Wood attacked the claims of Tom Nairn that in some fashion Ukania (his ‘funny’ word for the United Kingdom, modelled on the novelist (1880 – 1942) Robert Musil’s term for the Austro-Hungrian empire, Kakania – shit land) owed its economic difficulties to its constitution.  Economic problems  arose at root from the general contradictions of capitalist accumulation, in a specific form. The problems of British democracy were due to its capitalist character – it is hardly alone in having a monarchy to begin with – not to the issues Nairn-Anderson dreamt up about its sonderweg.

More widely Wood is known as an advocate of a version of the ‘Brenner thesis’ (after Robert Brenner’s article “Agrarian Class Structure and Economic Development in Pre-Industrial Europe,” 1978). The creation of market relations in British agriculture were considered to be the foundation of modern capitalism. The essential condition was separation from non-market access to the means of subsistence, the means of self-reproduction. Wood argued that it was the capitalist transformation of agriculture, followed by the rise of merchant class expanding these forms through international trade, created the ground of Western capitalism.  It was also responsible for the distinctive state forms that emerged in Britain.

In “The Agrarian Origins of Capitalism” (1998) Wood summarised her views:

The distinctive political centralization of the English state had material foundations and corollaries. First, already in the 16th century, England had an impressive network of roads and water transport that unified the nation to a degree unusual for the period. London, becoming disproportionately large in relation to other English towns and to the total population of England (and eventually the largest city in Europe), was also becoming the hub of a developing national market.

The material foundation on which this emerging national economy rested was English agriculture, which was unique in several ways. The English ruling class was distinctive in two major and related respects: on the one hand, as part of an increasingly centralized state, in alliance with a centralizing monarchy, they did not possess to the same degree as their Continental counterparts the more or less autonomous “extra-economic” powers on which other ruling classes could rely to extract surplus labor from direct producers. On the other hand, land in England had for a long time been unusually concentrated, with big landlords holding an unusually large proportion of land. This concentrated landownership meant that English landlords were able to use their property in new and distinctive ways. What they lacked in “extra-economic” powers of surplus extraction they more than made up for by their increasing “economic” powers.

Wood’s political stand was firmly within the Marxist ambit. In 1999 she stated (in “The Politics of Capitalism“):

…all oppositional struggles—both day-to-day struggles to improve the conditions of life and work, and struggles for real social change—should be informed by one basic perception: that class struggle can’t, either by its presence or by its absence, eliminate the contradictions in the capitalist system, even though it can ultimately eliminate the system itself. This means struggling for every possible gain within capitalism, without falling into the hopeless trap of believing that the left can do a better job of managing capitalism. Managing capitalism is not the job of socialists, but, more particularly, it’s not a job that can be done at all.

This broader focus on the links between capitalism and state forms continued in her study Empire of Capital (2003). This analysed how the “empire of capital” (rather than the vague ‘globalisation’ or the ‘rhizome’ of Michael Hardt and Antonio Negri’s Empire) shapes the modern world through“accumulation, commodification, profit maximization, and competition”.

Wood had a profound influence on countless people.

She was a democratic Marxist, a feminist, a perceptive writer and a force for good.

Homage to her memory.

Posted January 15, 2016 In Memoriam by newpolitics
About Author

One comment on “Ellen Meiksins Wood: A Marxist who put Class at the Center of Her Analysis”