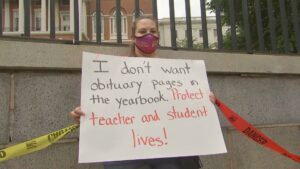 C.R. Mills argues that the current ‘teachers vs. parents’ framing surrounding school reopenings, must be reframed.

Trump Lost the Election, But What is the Future of Trump and Trumpism?

Having lost the election, what is Trump’s future? At the top of his agenda is arranging a pardon for himself, for crimes of which he has not been convicted. He might try to use the presidential pardon to pardon himself, which would almost surely end up in the Supreme Court.

Lysenko Comes to the CDC: Exploring the Relationship Between Science and Politics

The specter of Lysenko is haunting the CDC and the entire Trump administration, revealing that the perversion of science is as likely in a capitalist democracy as it is in a Stalinist state, and always with dire consequences.

Why We Campaign to ‘Save the Middle Class’ and Shouldn’t

The centering of “saving the middle class” in presidential politics not only left open the possibility of direction of anger and misunderstanding towards the racialized poor, but encouraged it.