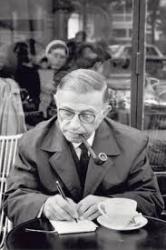 Cafes bring memories of the unpleasantly bleak days of my undergraduate studies in which I sought my peace of mind in the rough and stormy sea of Jean-Paul Sartre’s world, his philosophy and his novels shining light on the notion of loneliness for me. And I lived inside his books and through the characters he created. However, the more I grew critical, the stranger I found Sartre’s intellectual legacy.

Agitated, the philosophical underpinnings of Sartre went up in smoke for me in the next few years. However, his charismatic intellectual figure has remained a revered model for my ntellectual roaming, rambling, and gypsy soul that wanders hither and yon to find a safe shelter.. I am beholden to Sartre, for he taught me that philosophy could occur everywhere, especially in cafes, which were sources of many examples for his philosophical discussions in Being and Nothingness. His book coloured my moments of loneliness when I was a fresh-off-the-boat student, and also defined cafes for me, standing out among so many other places in which one can philosophize!

Sartre teaches us to bridge our thinking to crowded places such as cafes so that we no longer can snub others and learn how to think in the presence of other people; how to think of them and see them as the extensions of our thoughts, selves, and beings. “Hell is other people” is often quoted from Sartre, to prove his philosophy ignores others due to its being overly self-centric. It is true and this is why I have kept my intellectual distance from him for many years. Ironically enough, although Sartre never centred his philosophy on the notion of otherness, how could he have elaborated the concept of bad faith without his examples inspired by cafes in which he spent hours thinking and observing? Imagine reading Being and Nothingness without Pierre, a waiter of a café whose name is repeated over hundred times in the book; what do we get out of the notion of negation? Whether Sartre’s ideas are still tenable or not, his ways of philosophizing in crowded places, where people are socially engaged, can still speak with us and inspire us at best.

Twenty-five years after Sartre’s demise, I am pondering what Sartre could have possibly thought of franchise branded cafes and their patrons. I really long to obtain some answers to these questions: what could Sartre possibly observe in one of the franchise branded cafes such as Starbucks? How could he add a new chapter to his widely hailed masterpiece while spending time in one of these cafes? Where could he find his Pierre, the beloved woman and her lover, and patrons? In this figment, could Sartre hear the echo of his experience of cafes from years ago? Are cafes still sites of socialization or have they simply become the sites of isolation and forgetfulness?

Seeing many people in cafes-who keep busying themselves with their laptops, cell phones, or iPads–with their eyes glued to the screens– never ceases to keep me wondering. The more my eyes ramble around to meet with the wandering others aimlessly and curiously observe people, the more I grow dismayed. Cafes used to be sites of the haphazard socialization of people from different backgrounds, to share their insights together. The fact that Sartre, like many pioneer writers of the twentieth century, was tied to the crowded cafes of Paris has taught me that if we cease to see the face of others, we lose our ability to think and write. How can one write when s/he does his/her best not to be exposed to random conversations with strangers, who ever-increasingly are considered potential sources of danger and threat in our age?

Any writer needs to keep her/himself floating in the surrounding atmosphere to stay current on society, the ways people behave with different characters, the varied stages of laying out details, and generally how things truly are and why. Many in-depth intellectual discussions, which left tremendous impacts on many souls, were triggered in cafes where people like Sartre or Andre Gide submerged themselves, either as curious observers or active participants in discussions. But ever-increasingly, we are losing these socially oriented cafes and stepping towards isolated ones, which are anything but idea-inspiring.

Cafes are not unique but are typical and reflective of our age in which we are wedging ourselves into our small and thick shelters to avoid seeing and knowing, armouring ourselves against any possible external danger. We are lonely; it saddens me that we delight to be alone not because we are happy in our isolation, or shells, but because we are unable to decide in the spur of the moment to live otherwise. What if our isolated souls can trample our Aristotelian legacy as social animals? If we lose the social aspect of our nature, then we are left alone with the animal part of it. Isolated human beings are not far away from dehumanized animals, which lack any idea of society. Are we losing our humanity then?

My friend, who is American, once unveiled why he has been living outside the country for more than fourteen years. He told me that in the States, many people believe that they are the happiest people in the world and think that other people from other parts of the planet are longing to enjoy the same happiness. It never occurs to them that happiness could exist in any other places! But when he moved down to Mexico he realized that there are many jubilant people, who are enjoying not-yet-neo-liberalized happiness. Neo-liberalism is devouring our imagination, and in its place, rents out its own perception of happiness to us. The black-and-white dichotomy of happy western people versus non-western “backward,” “miserable,” “resilient,” and unhappy people who are in need of western charity- either humanitarian aids or interventions- to enjoy the same happiness is ubiquitous. Neo-liberalism engineers our happiness through images of McDonald’s, Starbucks, Walmart, Tim Horton’s, and countless other franchises, underneath these images we can only celebrate our isolated happiness.

I had the same experience towards cafes where I used to spend hours of my days or nights back in Iran. Cafes are smoke-free zones in Iran. I have enjoyed groups of my companions and my intellectual friends in cafes, and was enthralled by their genuine thoughts. I had so many random discussions with people who I barely knew. Cafes were sites of socialization for me and for many of my friends, and we found our resistance against imposed political and social restrictions inside crowded places such as cafes where we read poetry, discussed new philosophical and social ideas, and theorized about almost every single detail of our daily lives. Cafes were sites of resistance against the oppression of everyday life for us. It was not absurd and pointless to me to go to the cafes and spend hours with my friends there. Significant parts of my intellectual life were shaped inside these cafes, among other people. This is why the more time goes by, the less I can go to one of the branded cafes such as Starbucks and bother myself by seeing the ever-increasing isolation.

Yes! There is a plenty of happiness in the world, as it is much more diverse than we (or neo-liberalism) imagine it to be. Frantz Kafka brilliantly said, “ There is plenty of hope in the world, but not for us”. I am in favour of Gorgio Agamben’s interpretation of this quote (in his book Profanations, written with Martin Rueff) where he maintains that Kafka meant that plenty of hope and happiness in the world exist, but not in places that are already defined as our sites of happiness by capitalism (p. 20). We need to find such places outside of our defined and engineered portion of happiness. In the past couple of decades, happiness was separated from socialization and we are disciplined to individually enjoy our happiness but not collectively. We are losing our social aspect in this isolating system and becoming more and more dehumanized. But we are not turning out to be animals. There is no animal in the world that can live up to such a degree of loneliness. We are the loneliest animals on the earth, as we are dehumanized ones! By the way, who is calling the shots?