Brazil: Marielle’s death was not just more of the same 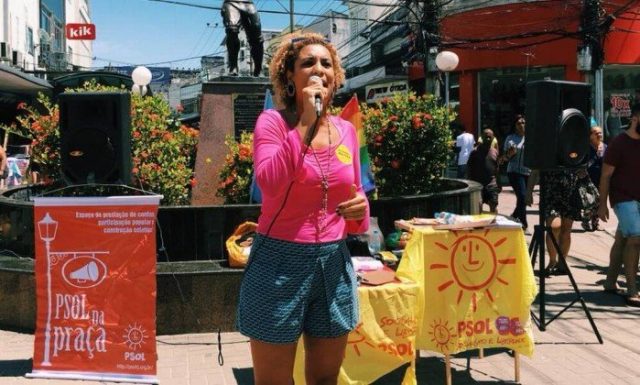 On 14 March, Marielle Franco, a city councillor in Rio de Janeiro, Brazil, of the Socialism and Freedom Party, was assassinated. In a piece originally published on the website of the Brazilian New Socialist Organisation (NOS) and republished here from the website Esquerda Online, Giambatista Brito argues that her death marked a new low in the country’s descent into political repression following the coup d’état of 2015. Translation by Max Leak.

The death of Marielle Franco was one more killing in the violent capital of a violent state within a violent country in violent Latin America. But it was not just more of the same. It wasn’t a random slaying, a killing over “suspicious behaviour”, a firefight, death following from assault, or anything so typical as these. It wasn’t everyday violence which killed Marielle. These were four bullets to the head, fired very proficiently in a premeditated attack. The bullets which took the life of Marielle also took that of Anderson [Anderson Pedro Gomes, her driver], but we shouldn’t lose sight of the fact that these bullets were meant solely for her. Anderson, a precarious worker like so many others busting a gut to help feed his family, was an unreplaceable loss to his loved ones, but he, in an assassin’s lexicon, was “collateral damage” – she was the “target”.

There has been no shortage of voices affirming that Marielle was killed for being a woman, for being black, for being a favela dweller, and for being LGBT. And yes, this much is true. But it’s also important to say that this is just one part of the truth. Women, black people, favela dwellers, and LGBT people are killed in Brazil every day. This death forms a part of that reality, but that reality is not the last word. Women, black people, favela dwellers, and LGBT people are killed because, in the daily brutality of Brazilian existence, their lives are seen as worthless. Marielle could not possibly be seen thus, and the assassins knew it. They waited two hours outside a meeting she was attending before they killed her. Those who took her life did it not because her life “was worth nothing”, but because, to them, her death was worth a great deal.

It has also been said that she was killed for being an activist and a defender of human rights. And once again, this is true, but once again, that is not the whole truth. Brazil has been killing community leaders, peasant leaders, indigenous leaders, Afro-Brazilian leaders, left, right and centre since forever. Chico Mendes, Zé Maria do Tomé, Dorothy Stang, and an endless list of such men and women. Marielle’s death forms a part of that list, but that, too, is not the whole story. Marielle was one of the principal voices in the fight against police violence and the power-grab of the federal government in Rio de Janeiro.

Everything said up till this point is true, but even together they aren’t sufficient, nor do they give an image of the gravity of this pitiless slaying. This was not just “more of the same”, and if we fail to understand that, we run the risk of being caught up in the discourse and the narrative of those who want us frightened, divided, on our knees – and, if not this, dead.

They killed a PSOL (Socialism and Freedom Party) councillor, an elected leader of the socialist left, and that is, indeed, new. Brazilian democracy was always very violent, but it had never yet done something like this. It was different from, for instance, Mexican democracy, where 111 mayors have been killed over the last 12 years, the great majority assassinated in cold blood. It is true that, here too, in cities gripped by drug trafficking, albeit in small proportions compared with what’s faced by our brothers in Mexico, political candidates are even elected officials are killed as part of disputes over power and territory, as criminal enterprises lash out against rivals who have involved themselves in politics. But this is not a case of that. It’s necessary to clarify that a rubicon has been crossed here. The death of Marielle was an assassination with openly and overtly political motives, and one which may very well have been carried out by agents of the state.

Until the night of the 14 March, the elected councillors of big capital cities were “big fishes” to an extent that protected them from murder. We are not facing “just one more” of the many murders committed against our people over continual years. Not a bit of it. This was a first. And that fact is why the squares and streets of the whole country were occupied, even putting some in mind of the protest movement of June 2013.

This movement must grow larger and more potent, with a unity of the socialist left and the other movements that have arisen. If it does not, then either, on the one hand, the narrative of “tackling violence” will win out, with the strengthening of the federal government presented as an escape, or, on the other, this kind of event will become routine, and after Marielles, there will be Sônias, Marcelos, Renatos and Guilhermes too.

This was not “more of the same”, and it cannot be responded to as such. Indeed, this would be a bad moment to allow any discourse of division to gain ground among us, or to ask for silence from any voice of indignation, no matter who they are or where they come from. It is not the time to allow space to an “apolitical” discourse of any kind. We need the courage to fight in unity against those with power, who are advancing against us.

For our dead, not a moment’s silence, but an entire life of struggle. Let these not be empty words.