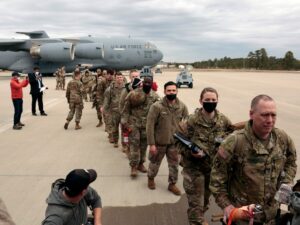 U.S. Army soldiers from the 18th Airborne Division prepare to board a C-17 aircraft as they deploy to Europe from Fort Bragg, N.C., on Thursday, Feb. 3, 2022. AP Photo/Chris Seward

U.S. President Joseph Biden has begun to send small numbers of U.S. troops to Eastern European nations—some 8,500 altogether have been put on high alert—though none will go to Ukraine, which is not a member of the North Atlantic Treaty Organization (NATO). Is this a first step toward war?

President Vladimir Putin has mobilized some 140,000 troops that threaten Ukraine, largely because of the country’s increasing alignment with the West, and specifically because Putin opposes its joining NATO. Ukraine’s government has expressed a desire to join NATO, but European nations and the United States both oppose it joining now.

Biden has also warned Russia’s President Vladimir Putin of economic sanctions that will be “enormous” and “severe” if Russia invades Ukraine. The sanctions on banks, corporations, and the Nord Stream 2 gas pipeline would have a devastating effect on the Russian economy, but also perhaps on the economies of Europe and the entire world. Biden’s opposition to Putin may also be motivated by concerns that if the United States doesn’t oppose him, it may encourage Xi Jinping, China’s leader, who would like to seize Taiwan.

Meanwhile in Congress, House Leader Nancy Pelosi has fast-tracked a bill that would give $500 million in military aid to Ukraine and impose further sanctions on Russia. Some House members have complained that fast-track, which eliminates much debate, will lead to military rather than diplomatic solutions.

The Progressive Caucus, which has 97 members in the House and one (Bernie Sanders) in the Senate, released a statement saying, “We continue to watch Russia’s threatening behavior towards Ukraine with alarm. There is no military solution out of this crisis — diplomacy needs to be the focus. We support the Biden Administration’s efforts to extend and deepen the dialogue, allowing for robust negotiations and compromise. We have significant concerns that new troop deployments, sweeping and indiscriminate sanctions, and a flood of hundreds of millions of dollars in lethal weapons will only raise tensions and increase the chance of miscalculation. Russia’s strategy is to inflame tensions; the United States and NATO must not play into this strategy.”

Bernie Sanders, criticized Putin for threatening to invade the Ukraine and called for diplomatic solutions, but would not speculate on military options.

The issue of support for Ukraine has roiled the Republican Party, with influential rightwing pundits and politicians opposing military aid to Ukraine and some even supporting Vladimir Putin of Russia. Former president Donald Trump, who admired Putin and tacitly supported Russia on various issues, opposes U.S. involvement, stating that Ukraine “is a European problem.” So, a beneficial side effect of the Ukraine controversy has been to cause a split at least on this issue.in the Republican Party that until now has been united behind Trump,

The U.S. far left has long opposed war and militarism. The Democratic Socialists of America, for example, calls for the abolition of NATO. The largest anti-war organization in the United States, Act Now to Stop War and End Racism (ANSWER), called for demonstrations on January 21 with the slogan “Stop War with Russia.” ANSWER, however, is a campist organization some of whose members actually support Russia. With COVID Omicron rampant and cold weather throughout much of the country and the anti-war movement weak, turnout was small and there was no media coverage.

Russia’s threats to Ukraine have created a new foreign policy political landscape. Some of the far right and much of the campist left now both share sympathy with Russia. The neoliberal Democrats and Republicans as well as the internationalist left support Ukraine, but for very different reasons. The U.S. government wants to expand its influence, while we on the internationalist left oppose Russia, NATO, and the United States and support self-determination for Ukraine.

Posted February 6, 2022 Uncategorized by Dan La Botz
About Author
DAN LA BOTZ is a Brooklyn-based teacher, writer and activist. He is a co-editor of New Politics.