Monsters and a Critique of Everyday Neoliberalism:

An Interview with David McNally
By: Tessa Echeverria, Andrew SernatingerJuly 4, 2014

[This is part two of an interview with scholar-activist David McNally on the current economic crisis. The first part focused on the crisis itself, its causes, the way in which working life has been reorganized, the perspective of ruling elites in managing the crisis and pursuing austerity policies, and how this should help inform our stance as movement activists.

An Interview with David McNally
By: Tessa Echeverria, Andrew SernatingerJune 29, 2014 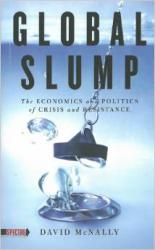 [It’s been nearly seven years since the onset of the global economic crisis that began in 2007. In order to get an understanding of the crisis—of its origins, depth, and trajectory, we spoke with David McNally, activist, political economist, and author of Global Slump: The Economics and Politics of Crisis and Resistance (2010) and more recently Monsters of the Market: Zombies, Vampires and Global Capitalism (2012). For readability’s sake, we have broken this interview into two parts. This first part focuses on the crisis itself, its causes, the way in which working life has been reorganized, the perspective of ruling elites in managing the crisis and pursuing austerity policies, and how this should help inform our stance as movement activists.

We’re at an interesting (and terrible) moment where we’re witnessing attacks on most every gain working people have made for at least the last half century. The curious exception to that has been the advance of marriage and civil rights for gay and lesbian couples in many U.S. states and core imperialist countries.