Are We “All in This Together”? 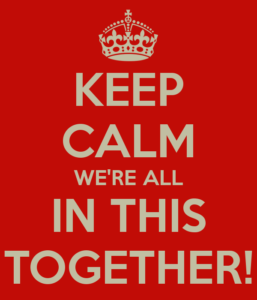 The coronavirus crisis has provoked different reactions. Many have responded with compassion, kindness, and solidarity. Some have used it as another opportunity for money gouging, scams, and rip offs. Collective human warmth and love has battled cold individual selfishness and hatred. Solidarity has fought racism. Social responsibility has combated hedonism.

In the face of these reactions, the media and politicians have engaged in a multi-pronged propaganda campaign. Celebrities from LL Cool J to Young Sheldon’s Ian Armitage and everyone in between have repeated “We’re all in this together” over and over on TV.

But is this mantra true?

In the most superficial biological sense, yes. we are all in this together. COVID-19 can strike anyone and kill with impunity — the young and old, rich and poor, of any race or gender. That true of the coronavirus and every other pandemic.

As Frederick Engels noted, programs of public health grew out of this realization in the 1800’s. The rich discovered that they, too, could be felled by pathogens. When the poor in the slums got cholera, tuberculosis, small pox etc., the rich in their mansions were not immune. Hence, society-wide efforts at sanitation and the provision of clean drinking water.

Though the rich care about their own health and that of their children that is not their only relation to this issue. As Marx noted, each capitalist is the “personification of capital.” Capital is driven by competition to accumulate for the sake of accumulation. The drive for profit dominates all. Each economic unit must exploit its workers as much as possible, cut corners, and reduce expenses. Capitalists, as capitalists are first of all concerned with the survival and expansion of capital.

The drive for profit impacts every aspect of society. If public health spending cuts into profit, capitalists try to limit it to the minimum necessary to keep the system running. This has clearly played itself out in the coronavirus crisis, in which the near-collapse of the hospital system has been a logical outcome of decades of a neoliberal campaign to increase the concentration of wealth at the expense of workers and the poor.

Neoliberalism is not an aberration but flowed directly out of the competitive position capitalists found themselves in during the mid- to late 1970s. Their response was to undercut the funding of public services (through reduced taxation) and to privatize them whenever possible.

Neoliberal policies impacted the whole world and they continue, in one form or another, everywhere. Massive cutbacks in health spending have become a fact of life even in social-democratic countries. While everyone might be guaranteed the right to health care, neoliberalism in practice has meant its reduction in availability and quality. Neoliberalism in medical care has also drawn on “just-in-time” in manufacturing — and approach tat profitability by making production lean and efficient. At the level of the individual hospital, this has taken the form of keeping only limited stockpiles of medically necessary equipment on hand, since storage and pre-ordering cut into the bottom line. Smaller hospital staffs and unsafe nurse-patient ratios also ensured the highest possible quarterly profit.

These competitive measures have taken effect in the vast majority of hospital — even public hospital and those legally labeled as non-profits, where CEOs, board members, and senior administrators often receive grossly inflated compensation. This is why the health care system as a whole was unprepared for the pandemic.

The impact of a pandemic varies by class. The rich might not be able to avoid communicable diseases totally, but a mansion enables social distancing whereas a crowded slum does not. The very poor, the homeless, and those living in former colonies are even more susceptible. We are hardly “all in this together” on equal terms.

What is true of individual health outcomes is also true of economic outcomes. The fear of social unrest and economic collapse has forced the government to provide expanded unemployment compensation and even direct payments to the working class. However, these are limited and bureaucratically distributed. Workers and the poor will continue to suffer from unemployment, eviction, foreclosure, and even worse health conditions as this crisis unfolds. On the other hand, the rich can live in high style for years off of the accumulations they made from exploiting the poor.

The impact of the crisis will be differential within the working class as well. Some can maintain their salaries by working at home. Others must face disease and possible death by continuing to go to work. Some will not face more racism than usual while others, especially Asians, will. Women are losing their right to abortion. Those already in poor health suffer the most as even normal health care is cut back. Even before the current crisis poor economic health often yielded poor physical health and less access to health care.

The most profound way that we are NOT all in this together is in solutions. A real solution to the current pandemic and future health crises is collective. It requires focusing resources on human health at the expense of accumulation of wealth. It requires international planning and coordination rather than competitive profit-mongering. It requires asserting the interests of the vast majority against the capitalists. It requires intense class struggle.

This understanding needs to inform how we fight back against this crisis and future crises. The message trickling down from the top of society is aimed at social stability. “We are all in this together” when spoken from above means: “Don’t fight back, obey the law, listen to your leaders, work harder, and accept new government repression.”etc. It aims at maintaining the status quo that brought us this crisis in the first place.

For ordinary people, “we are all in this together” can mean solidarity with neighbors and co-workers. It can mean humanitarian aid. We should build on this sentiment while rejecting the ruling class’s spin. We need to support the workers striking and demonstrating for better safety precautions, hazard pay, production of more health equipment , more social spending etc. If workers don’t fight back, the rulers will use this crisis to impose more exploitation and repression, more cut backs and misery. As with every other issue, it is struggle against the system — not acquiescence to it — that improves conditions.

Finding ourselves “all in this together” does not mean that class collaboration is the answer to this crisis, or any other. The profit-orientation of the current system is the root of the problem. That root must be torn up and destroyed. We need a system based on collective public ownership and workers democratic control so that human needs dominate decisions. That system is international socialism. To paraphrase Marx: Workers of the World Unite, you have nothing to gain but your lives!

One comment on “Are We “All in This Together”?”