Can We Save the Postal Service?

The U.S. Postal Service is in deep trouble. The postal Board of Governors has asked Congress for $75 billion to keep the agency afloat; without it, the outgoing Postmaster General said, USPS could “run out of cash” by September.

A big drop in letters during the emergency shutdown has intensified the budget crunch, but the underlying crisis predates the pandemic. The good news is, the problem is mostly artificial—Congress created it with the stroke of a pen, and could fix it the same way. If it wanted to.

A 2006 law requires USPS to prefund its retiree medical benefits 75 years in advance—meaning it has to set aside money for the old-age care of future employees who haven’t even been born yet. This onerous requirement makes it look like the postal service is in the red. That was the point: to create an excuse to cut service, eroding support for this very popular public service, and let corporate vultures swoop in and privatize the juiciest parts.

Since then, postal workers and the customers who love them have fought several waves of closures of mail plants and post offices; they won some and lost some. The mail got slower. But so far the service as a whole, with its guarantee of universal service at universal rates, still stands.

Now we have foxes in charge of the henhouse: an openly hostile president and postal Board of Governors, and a ghoulish incoming Postmaster General from the private logistics industry. They’ll happily offer cuts, outsourcing, and union-busting in exchange for the quick infusion of cash the agency needs. The Letter Carriers (NALC) are especially vulnerable—their contract expired last fall and the next one is in front of an arbitrator right now.

Even the latest stimulus bill proposed by Democrats in the House [only] included $25 billion for the postal service—just one-third of what the agency requested. “That’s their starting position, from which they will compromise and bargain down,” said Alex Fields, a rural letter carrier in Knoxville, Tennessee. “The Democrats wouldn’t give us nearly enough, even if they could have everything they wanted. We have to fight for our own future.”

Who benefits from postal privatization? Plenty of logistics companies would love to get their paws on the postal service’s proprietary data, with routes sequenced to reach every address in the U.S. every day. Developers want the great real estate that’s sitting under post offices in certain zip codes. And if you think UPS and FedEx prices are high now, wait till you see ’em without public competition.

But the public will suffer. No private company wants to deliver a letter for 55 cents, or cheaply ferry prescriptions to rural addresses, or guarantee the integrity of a vote-by-mail election for free.

Privatization would be a huge loss for labor. There are nearly a half-million postal workers; it’s the largest union workforce in the U.S. It’s an important source of decent jobs—located in every neighborhood of this country—for Black workers (21 percent of the postal workforce), veterans (18 percent), and women (40 percent, compared to 20 percent at UPS).

Not to romanticize; these jobs aren’t great. Under financial pressure, all four postal unions have accepted a tier of permatemp “non-career” jobs. New hires sign on for substantially lower pay and lesser benefits. Meanwhile the workload has steadily intensified. Turnover among the permatemps is high.

But what would replace these union jobs is much worse—more low-wage, nonunion, Amazon-type jobs. Or worse, “independent contractor” gigs. Or worst, especially in rural areas: nothing at all.

Ironically, while letters are down, the postal workload is anything but slow. Packages are way up, with a pandemic surge in online buying.

For postal workers pressed into overtime, it’s like the Christmas season all over again—but without a peak-season pay boost, with summer temperatures and no air conditioning in the ancient delivery vehicles (the fleet is overdue to be replaced, but budget troubles keep delaying it), and with some co-workers out on coronavirus-related leave.

Postal management fumbled the early weeks of the pandemic. Safety talks about personal precautions were distributed to supervisors, but in many places, never read aloud. The Postal Workers (APWU) got management to agree that gloves, sanitizer, and masks would be provided at all stations—but that wasn’t the reality for weeks afterward. Management was cagey about who had come down sick and who might be at risk.

People were mad, and worried. Some facilities saw informal sickouts. Fields started an online petition for safety precautions, hazard pay, and administrative leave with full pay for anyone at high risk. He hoped to use it to build a network of rank and filers in his region—but the petition took off. Within a day it had tens of thousands of signatures from all over the country.

The effort congealed into a 20,000-member Facebook group and a series of organizing calls and webinars where members of the four U.S. (and one Canadian) postal unions exchanged information and tactics. As workplace conditions stabilized somewhat, the core group shifted its emphasis to the fight to save the postal service. See here for how you can help.

Print Out a Free Poster 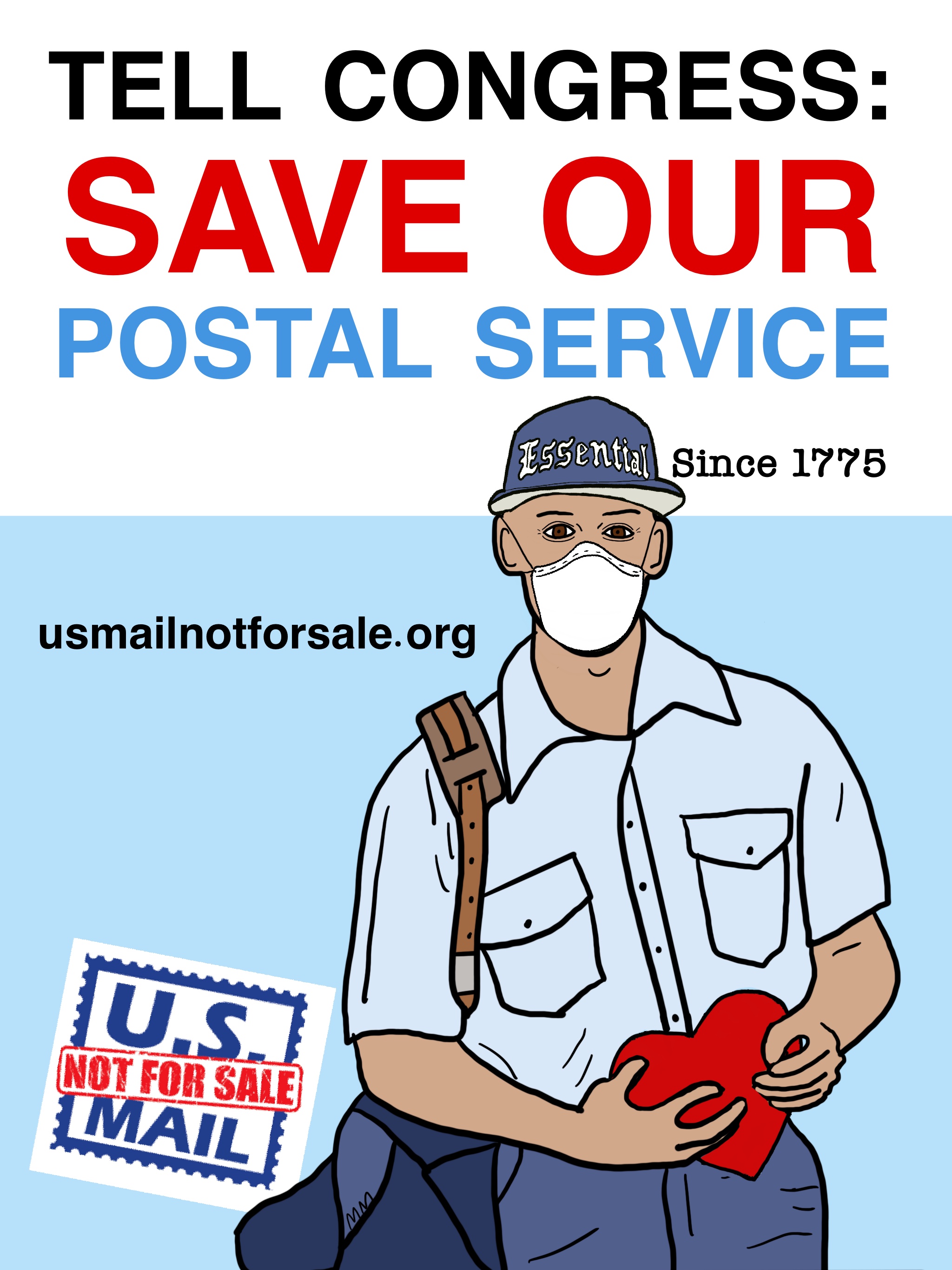 These posters are designed to be printed out and posted in the window of your home, store, or vehicle. There are seven designs showing a variety of postal jobs. Posters by Mary Matthews, drawingdailyusa.com. Click here to view the full set.

Posted May 24, 2020 Labor, United States by Phil Gasper
About Author

Alexandra Bradbury is editor and co-director of Labor Notes. al@labornotes.org